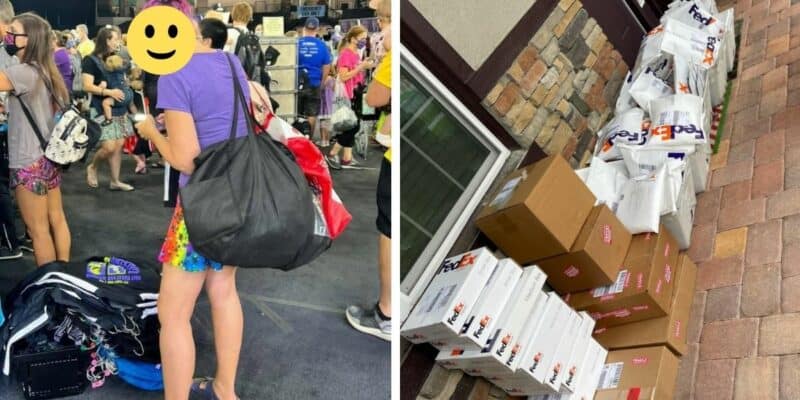 This story has been updated since its original publication.

Part of the magic that comes with visiting Walt Disney World Resort, Disneyland Resort, or any other Disney Resort is all of the exclusive merchandise that you can pick up. Of course, shopDisney is always available, but some products are exclusive to the parks or certain events.

Buying merchandise from Disney directly ties a product to the memory you may have from that day, which can end up becoming priceless. One thing about a lot of merchandise at Disney is that it can go fast, and it is extremely coveted. For example, when the 50th anniversary began at Walt Disney World, we saw multiple fights break out at Magic Kingdom’s Emporium over a Starbucks tumbler. The altercations became very physical, all because the bottle had sold out, and Guests were fighting for the last one available.

As a tip, Disney constantly restocks products that are meant to be in store for a whole season or longer, so if you do not get something on the first day, don’t fret, they will likely be back on the next — just like the tumbler was!

One issue that has come up lately as well has been Disney resellers. These are Guests who go to Disney and purchase multiple amounts of items so that they can resell them at a higher value to others. Many use their Annual Pass discount to get a deal on their items and then profit off of those savings, which is not allowed and stated on the Walt Disney World website as a breach in the Annual Pass contract.

We have more recently seen Disney World put out signs for certain items telling Guests that they can only purchase a maximum of two. That being said, there have been loopholes to the rule. Resellers have either made multiple transactions or purchased two clothing items in each size from extra-small to double-extra large, leaving them with a lot of merchandise and other Guests waiting to see when and if Cast Members will be able to restock the shelves.

One reseller website, www.pixiedustshopper.com, posted that they would be shutting down their shop. Before going offline their website stated:

It’s been an amazing few years connecting with each of you, and I thank you for your support.

Disney is the most magical place on earth and we’ve received so many messages over the years about how our service helped you prepare for a visit, or help you in a tough spot when you couldn’t visit. It’s been an honor.

The entire resale community has gained a lot of negative attention lately. Some of it is understandable, but mostly it’s just unhappy people finding something to be unhappy about.

Pixiedust Shopper is shutting down operations. Any orders placed will be shipped out today and you can track the orders via the website or your notification emails. If you have any issues with the order, please email us and we will still be around to resolve it.

Thank you again, it’s truly been an honor.

Related: The World of Resellers: Disney Fights Back Against eBay Flippers

Of course, it was not made clear exactly why the store was shutting down, but many Disney fans have expressed their feelings towards resellers, and as you may imagine, it is not positive.

One Disney fan, Hayley (@HayleyParkHoppr), took to Twitter to discuss the reseller closing up shop. The Tweet quickly became a significant thread of others happy to see potential action being taken.

I was explaining how ridiculous resellers were to my mom and I went to pull up the website of that one girl and YOU GUYS pic.twitter.com/RwmYcoLZcz

Alyssaaaaaaabruh (@Alyssum_729) responded with a sentiment that echoed what many others were feeling, which is that resellers tend to clear out a lot of the merchandise the moment it becomes available, making other Guests visiting the Park unable to have a chance to purchase anything as well.

“Unhappy people” being unhappy that they can’t get the merch that they’ve wanted and have been hyped about. Like, I work, I can’t be at a merch location when something drops

“Unhappy people” being unhappy that they can’t get the merch that they’ve wanted and have been hyped about. Like, I work, I can’t be at a merch location when something drops. 😒

Some photos were also shared of a RunDisney participant purchasing tons of merchandise with loads of bags for storage which also upset many others. It seems that many of the Disney fans discussing this situation are under the belief that Disney was the reason for the shop closing — assuming that they reached out and spoke up. However, this is purely speculative.

What we do know is that if the reseller was purchasing merchandise with an Annual Pass discount and selling for profit, Disney could take action as it is stated in their rules and regulations that that is prohibited, as we mentioned above.

Of course, there are plenty more resellers out there, but it seems that the community is cracking down to ensure that any Guest purchasing an item at Disney is doing so without the intent of making any profit.