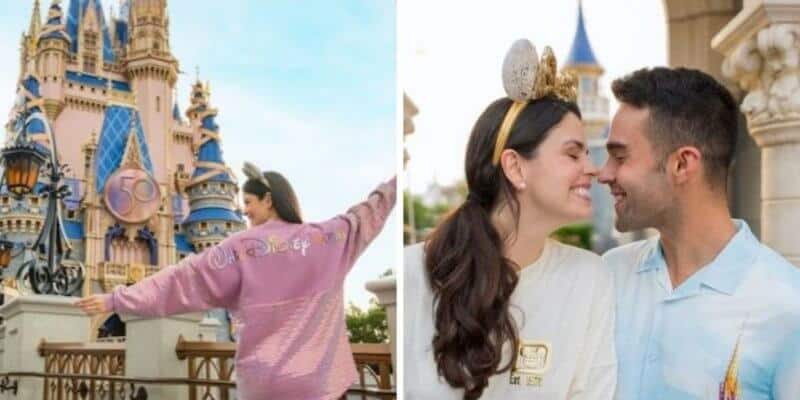 Ever since Walt Disney World opened to the public on October 1, 1971, magic and memories have continuously been made. Now, here we are almost 50 years later, still with the same magical experiences, one-of-a-kind entertainment offerings, family-friendly rides, and so much more.

To celebrate this milestone, Walt Disney World is releasing several new merchandise collections, each of which includes various items including pins, picture frames, t-shirts, and of course, Minnie ears and a new spirit jersey!

The iconic Magic Kingdom Park landmark, Cinderella Castle, serves as the inspiration behind this new collection. My favorite items include the collectable ornaments, the castle-themed mug and, of course, the light-up Minnie Mouse ear headband!

You may have noticed the new EARidescent décor on Cinderella Castle, and you will soon see more of it around Walt Disney World Resort in honor of the 50th anniversary. The latest color collection, which will debut in late October, is themed to match the EARidescent celebration and features everything from a mini-backpack by Loungefly and a Spirit Jersey to a set of sparkling Minnie ears.

But that’s not all because Disney Parks Blog announced that magical new displays are coming, too! You can read more about these displays here.

These new collections will debut this fall across Walt Disney World Resort, with select items available online at shopDisney.

For more information on the 50th anniversary at Disney World, visit our website here.

Will you be visiting Disney World for the 50th? Will you be purchasing some of this special merchandise? Let us know in the comments below.