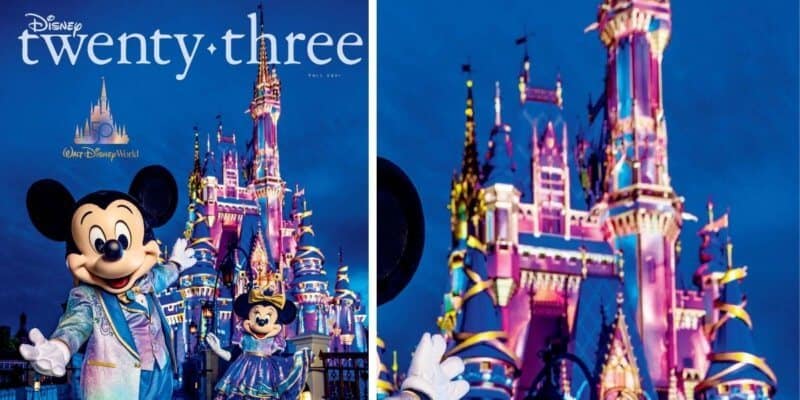 If you are a Disney World fan, you likely are counting down the days until October 1, when the entire Resort will begin the 50th anniversary celebrations and bring to life Walt Disney World Resort’s most magical birthday yet!

On October 1, the 18-month long anniversary celebrations will commence, transforming areas of every theme park to create a unified look with their Beacons of Magic. At EPCOT, Spaceship Earth will shine outwards with the new permanent points of light added to the sphere. Disney’s Animal Kingdom will have projections on the Tree of Life, and Disney’s Hollywood Studios will have its Beacon of Magic shining bright on the Tower of Terror.

Below, you can take a look at the cover of the newest D23 issue and see that Cinderella Castle is looking EARidescent as ever, with Mickey and Minnie standing by in their new 50th anniversary garb.

This photo provides a much closer look at the castle, showing off the details that the lighting will bring. From the looks of it, it seems that pink and blue tones will illuminate the castle, creating a shimmering multi-tone look. The gold accents also look especially vibrant, which hopefully signifies that they will shimmer, as we have seen now in two pieces of concept art as well as the latest image released on the cover of the fall 2021 issue of the D23 magazine.

Take a closer look at this zoomed-in image below:

Although the Beacon of Magic on Cinderella Castle will not be officially unveiled until October 1, Guests can currently see the added decor on the castle, including the newly added 50th anniversary medallion.

From the looks of it, it surely seems that Cinderella Castle will have a jaw-dropping transformation once lit up for the festivities!

How do you like this detailed look at Cinderella Castle’s Beacon of Magic? Let us know in the comments below!

Want to be at Disney World and see the castle light up for yourself? Click here to join in on the most magical celebration today!