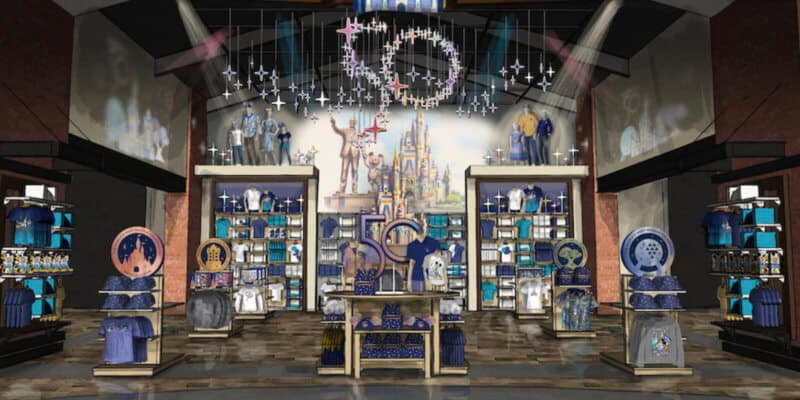 If you love Disney merchandise, we’ve got you covered! Disney Parks Blog has just dropped a ton of new information and photos all about the magical merchandise collections coming soon for the Walt Disney World Resort 50th anniversary. And now, we know that special, magical new displays are coming, too!

The 50th anniversary of Walt Disney World Resort is going to be a magical time at the theme parks. The Florida Disney Parks are some of the most magical places in the world, and to commemorate five decades of magic in Orlando, Disney is pulling out all the stops and hosting an 18-month-long celebration, complete with new fireworks shows and so much more. Of course, a Disney celebration is even better when there is special merchandise to mark the occasion!

We have a special look at the new merchandise arriving on Disney Parks shelves this year, from spirit jerseys to Minnie ear headbands and so much more. Here are some special looks at few items Guests can look forward to purchasing in person (note that some will be available on shopDisney):

Along with the merchandise first look, Disney also announced that there will be all-new displays at retail locations across Walt Disney World property to immerse Guests in the magic of the 50th anniversary!

This fall, look for one-of-a-kind retail displays that will incorporate Disney storytelling into your 50th merchandise shopping experience. The imaginative displays will pop up at select merchandise locations across Walt Disney World, including World of Disney at Disney Springs.

The rendering pictured above was envisioned by our very own merchandise cast members Eric Rachaphoumy and Paul Seus.

The Walt Disney World Resort 50th anniversary celebrations — appropriately dubbed “The World’s Most Magical Celebration” — officially begins on October 1. Remember that if you want to experience the magic of the Disney World 50th in person, there is no better way to book a trip than with an Authorized Disney Vacation Planner! Our friends at Academy Travel will plan the most magical vacation you could ever imagine. Click here to book — the 50th anniversary will run from October 1 through early 2023!

Which Disney World 50th anniversary merchandise items are YOU hoping to purchase on your trip to the Most Magical Place on Earth during the World’s Most Magical Celebration? Let us know in the comments!