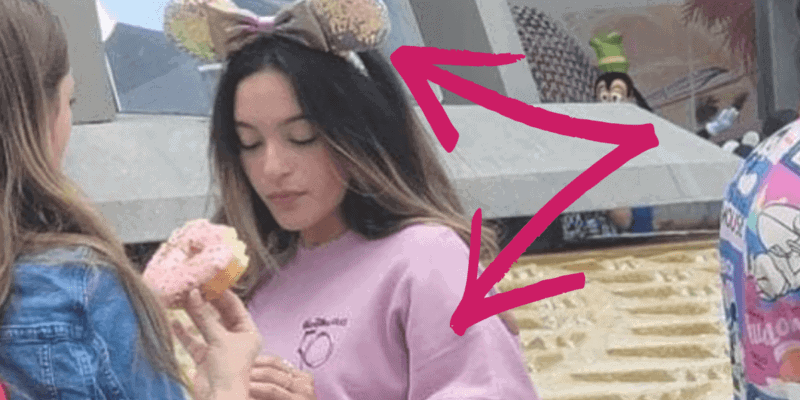 Spotted before their release, Walt Disney World’s 50th anniversary Spirit Jersey and Minnie Mouse ears are looking fabulous! We’re getting a sneak peek courtesy of a passing Disney Guest and a handy phone camera. We’re over the moon for this new and upcoming Disney Park birthday collection – do you think it will sell out?

Seen at EPCOT, the lavender Spirit Jersey gathers together the EARidescent color palette used during the Walt Disney World 50th Anniversary celebration. During the Spaceship Earth photoshoot, a candidly shot photograph reveals the front chest of the spirit jersey has a “50” logo that we’ve seen on the Cinderella Castle Crest as well as “Walt Disney World” traditional fonts. The lettering looks to be reflective or iridescent.

It’s also important to note that the bottom half of the theme park spirit jersey is striped in EARIdescent ribbons, giving the garment a reflective and shimmery appearance. Without too many photos to rely on, we’re hoping that this Magic Kingdom-inspired jersey is even more glamorous in person! It’s certain to be a wonderful machine washable style, much like the glitter that’s stamped into the Wishes Come True Blue Spirit Jersey from the last year.

And let’s not turn our attention away from the model’s head! Atop her tresses, we see a new pair of Minnie Mouse ears in what appear to be gold sequins and an EARidescent Minnie bow in the center. The look is classic yet updated to reflect the color palette of the upcoming celebration.

Thanks to Disney’s Neverland Delivery account on Instagram (handle of @disneys.neverland.delivery) we get a peek at the Resort photoshoot sharing the upcoming Disney merchandise. The caption reads:

WDW 50th Anniversary Ears and Spirit Jersey!!! ✨ Apparently this has been spotted today at the parks! Colors look absolutely beautiful! This was a photo shoot. Items are not available for pickups yet ? ? Lauren Owens Reynolds

Y’all know our deep love for Spirit Jerseys, whether they depict Grogu/Baby Yoda, Star Wars planets, Hades, Haunted Mansion Oogie Boogie, or our favorite little Orange Bird. Hopefully, we’ll get a closer look at the EARidescent striped pattern on the lower body of the spirit jersey, as well as the typical puffed lettering on the back shoulder. We’re fairly certain it will read “Walt Disney World” but in gold? Lavender? We can’t wait to see it!

Will you be collecting this new Walt Disney World Spirit Jersey or Minnie Mouse ears? Leave us a comment below!