Is the EARidescent Color Scheme Disney's Newest Trend? - Inside the Magic 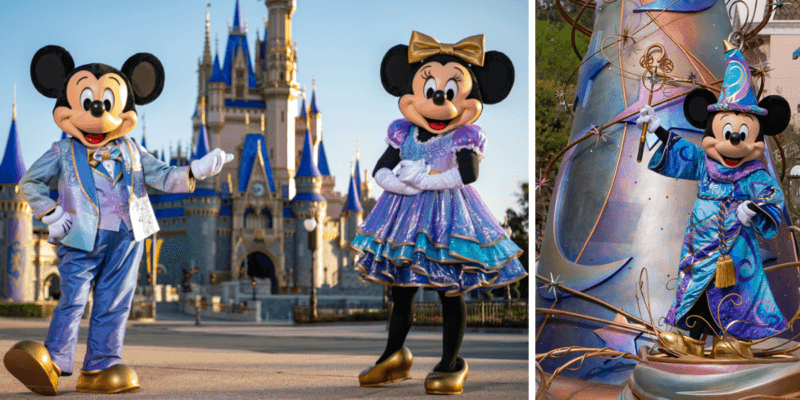 Walt Disney World Resort’s 50th anniversary is coming up this fall and fans are so excited as dates have finally been revealed for the celebration! No matter which Walt Disney World Park you’ll be celebrating in, there will be festivities and a new beautiful color scheme for Guests to enjoy. And, let’s just say, the colors look oddly familiar!

The Walt Disney World 50th anniversary is October 1, 2021 with its celebration lasting for 18 months. The vibrant colors we’ll be seeing at the four parks of Most Magical Place on Earth is EARidescent with gold highlights. Mickey and Minnie debuted their celebratory outfits they’ll be sporting for the event on Good Morning America. They look absolutely fabulous and Disney World fans have also already started to share their thoughts on the color scheme of the 50th anniversary celebration.

As we mentioned before, it’s not the first time we’ve seen the EARidescent colors. Last year, when the Magic Happens parade debuted at Disneyland Park, Mickey and friends got a new look. That EARidescent color scheme flows through the entire parade that surprised all the Guests in the original Disney Park when it debuted one day early! This parade that unfortunately was only able to run for a couple of weeks before Disneyland’s extended closure.

Disney may have a trend going here with the EARidescent colors and fans are loving it! It’s a great representation of Disney’s imagination and animation, as it puts motion into color. What an absolutely magical trend this is.

What do you think of the EARidescent colors that have seem to be flowing through the Disney Parks and Disney Cruise Line? Share your thoughts in the comments below!