Did you know that Orange Bird never speaks or tweets? That’s right, he only “Thinks Orange Thoughts!”

The Orange Bird character created by Disney for the Florida Citrus Commission originated in 1971 as a featured character in Adventureland. But did you know he did more than just appear in costume? Yup, the little Orange Bird has a long and rich history at Walt Disney World Resort!

Who is Disney’s Orange Bird?

Nesting at the Sunshine Tree Terrace (now Aloha Aisle), he greeted Guests and welcomed them to sip orange juice and listen to Walt Disney’s Tropical Serenade (now the Enchanted Tiki Room), sponsored by the very orange commission he was created for. The orange fowl appeared in Disney character costume with his now-characteristic beautiful leafy wings, green head feathers, and yellow belly.

Unlike other birds, Orange Bird was designed to never speak. Instead, he thinks orange thoughts, with thought bubbles in orange letters or orange smoke appearing above his head. Not being able to vocalize has made Orange Bird shy around other birds, so he looks for new friends often.

Being an advertising icon, Orange Bird was used in several print ads and coupons in the central Florida area. Below is a 10 cent savings coupon from 1973, courtesy of the Florida Southern University collection. You can see Disney’s copyrights alongside the Florida Citrus Commission’s credits.

Many people don’t know that Orange Bird was not just a physical character at Magic Kingdom. Thanks to the sponsored advertisements on behalf of Florida Orange growers, he appeared in two commercial advertisements with popular singer Anita Bryant in the 1970s.

Bryant even recorded an album with songs written by the Sherman Brothers and retelling Orange Bird’s story, and the album cover served as an illustrated book. You can hear Anita Bryant’s song about Orange Bird on YouTube, where the complete lyrics are also listed:

Orange Bird made his first animated appearance in a television commercial with Anita Bryant. Walking through a grove, she cracks open an orange to reveal our shy orange friend and tell us how he communicates. “Breakfast without orange juice is like a day without sunshine!”

When Anita Bryant’s commercial campaign was dissolved in the late 1970s, Orange Bird still hung around in a few educational nutrition animated shorts! During the early 1980s, Foods and Fun: A Nutrition Adventure and The Orange Bird and the Nutrition Bandwagon were made by Disney to educate youth about healthy eating… and promote the sale of Florida oranges. Below is the 1980 short, Foods and Fun: A Nutrition Adventure.

Eventually, Orange Bird would fade away when Disney and the FCC severed their ties in 1987, only to be revived in 2012.

Where to find Orange Bird at Disney theme parks

While Orange Bird was popular and visible in Adventureland at Magic Kingdom until the 1980s, he can now be found in a few places by Orange Bird enthusiasts.  At his current home of Sunshine Tree Terrace, citrus swirl seekers can look over the Cast Member’s head to see the original sculpture of Orange Bird flying high. He was “rescued” from the Disney Archives and added back to his namesake location.  We hope to again find Orange Bird in Magic Kingdom as a meet and greet character!

At Skipper Canteen, Disney Guests can find a book called Native Orange Birds of the Southeastern United States by Dr. Sid Truss. This book is a tribute to Orange Bird in that the author’s name said aloud is “Citrus.”

When visiting glam Minnie Mouse at Disney’s Hollywood Studios, you can find parody posters in her hallways. One poster is a play on “South Pacific” as “Mouse Pacific” with Minnie as the star. You can see a tiny orange bird flying over the wording as well as a tiny Enchanted Tiki Room building.

Lastly, while not in the Parks, Orange Bird fanatics may want to pick up a copy of Disney Kingdoms: Enchanted Tiki Room. The second comic issue features the story of Orange Bird attempting to fill in for the singing parrot, Jose. Disney Fandom tells us more about his comic book appearance:

“His inability to actually sing results in him being turned down, but the macaws are thankful for his offer anyways. In issue three, Wally meets the Orange Bird while strolling through the island and sees him as a Guardian Angel to help him with his troubles. However, he is not very good at interpreting the Orange Bird’s picture bubbles, leading him to make bad decisions.

In the final issue, the Orange Bird offers Saoirse the simple wordless advice of actually talking to her father and creates tickets for a stay on the Enchanted Tiki Room island for her and her father to help bond.”

Orange Bird continues to be an East Coast theme park phenomenon, even to the point of being a cult icon (much like Figment). Despite being a Magic Kingdom staple, Orange Bird has made his mark on EPCOT’s International Flower & Garden Festival, being that he is a fresh and fruity flavor icon.

Orange Bird has his own Spirit Jersey, Minnie Mouse Ears, Disney Dress Shop looks, jewelry, purses, mugs, tees, Magicbands, salt and pepper shakers, coin banks, planters, annual passholder magnets, Halloween party cards, and more. He routinely has his mug and moniker on new apparel and goods each year, so if you as a Disney fan have missed out on his past items, rest assured that Orange Bird will continue to appear on merchandise at Walt Disney World Resort. 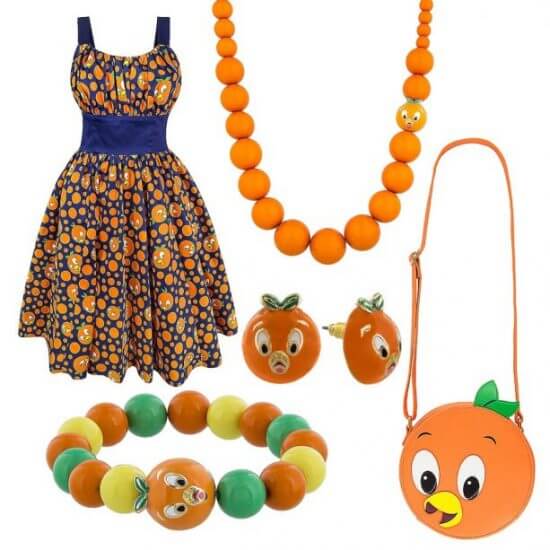 You might find what you are looking for at Magic Kingdom, EPCOT, or even World of Disney, the largest Disney store in the world, at Disney Springs. Those not visiting the Florida theme parks can always shop online at shopDisney.com for a wealth of Disney-related merchandise as well as parks-specific finds. 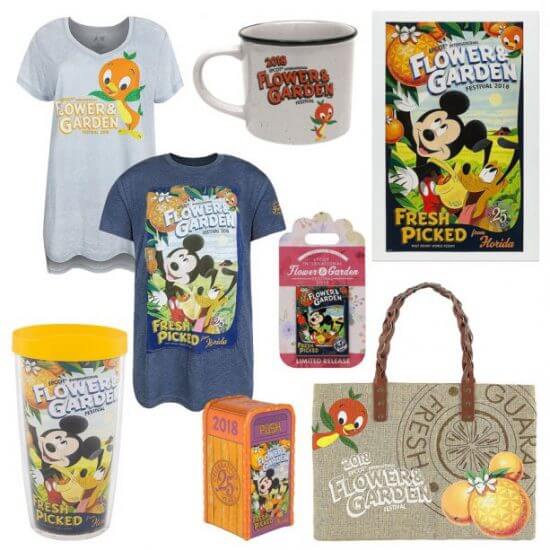 While it’s not something you can buy, Orange Bird did appear on his very own mural at Disney Springs, the Orlando shopping district on Disney property. Hearkening back to the 1970s, Orange Bird’s Florida Sunshine origin bursts forth in bright colors and plenty of sunshine on a large brick wall. A figurine of the Orange Bird also appears on a top shelf in the Twenty-Eight & Main shop area of the Marketplace Co-op store.

Are you an Orange Bird fan? Leave us a comment with how you learned about this tiny theme park mascot!

Comments Off on The Florida Orange Bird’s Colorful History