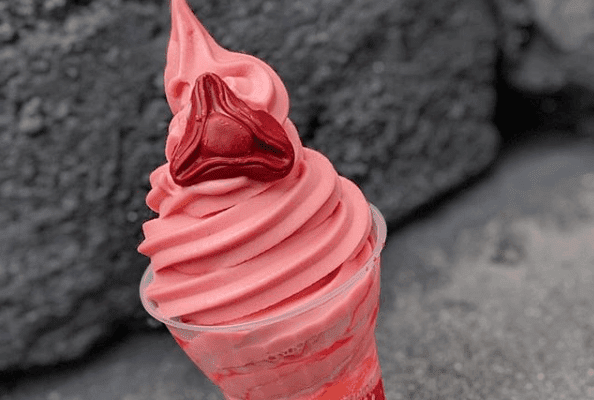 Just when we thought Disney had enough photo-worthy snacks, another amazing new treat pops up in Magic Kingdom. But hey, you can never have too many desserts, right? The newest (and possibly the prettiest) Dole Whip concoction is none other than Redd’s Revenge, and this one’s strawberry flavored and perfect for those hot Florida days.

This week, Walt Disney World’s Magic Kingdom debuted Redd’s Revenge, the newest dessert being served up at Sunshine Tree Terrace in Adventureland. For the price of $6.99, this amazing treat consists of Dole Whip strawberry soft serve, strawberry Fanta soda, and a red chocolate pirate hat. It’s themed after the Pirate Redd, the newest addition to Pirates of the Caribbean. If you’re familiar with sassy, empowered Pirate Redd, you probably recognize her hat right away on this dessert, and we must admit it was only a matter of time before the attraction’s newest animatronic got her own themed dessert.

We absolutely love trying new Dole Whip flavors, and this strawberry version is no exception. We love that Disney is finding fun ways to incorporate Dole Whip into a variety of desserts, and we hope the creative themes keep coming all year long. The strawberry flavor is as refreshing as it looks, and after the success of the Peter Pan float, we’re sure this one will be a crowd-pleaser.

Take a look at some Disney fans’ photos of the delicious new Redd’s Revenge Dole Whip below!

The Redd’s Revenge strawberry Dole Whip isn’t the only delicious new Disney treat available this summer at Magic Kingdom. Sunshine Tree Terrace in Adventureland has been serving up amazing frozen goodies lately including the one-of-a-kind Dole Whip FOMOsa. You can also get some photo-worthy treats like the 2319 cone from Auntie Gravity’s Galactic Goodies in Tomorrowland. We can never choose just one favorite, so we say you’ve got to try them all!

Have you tried the Redd’s Revenge Dole Whip at Magic Kingdom yet? Let us know your favorite Disney frozen treat in the comments!