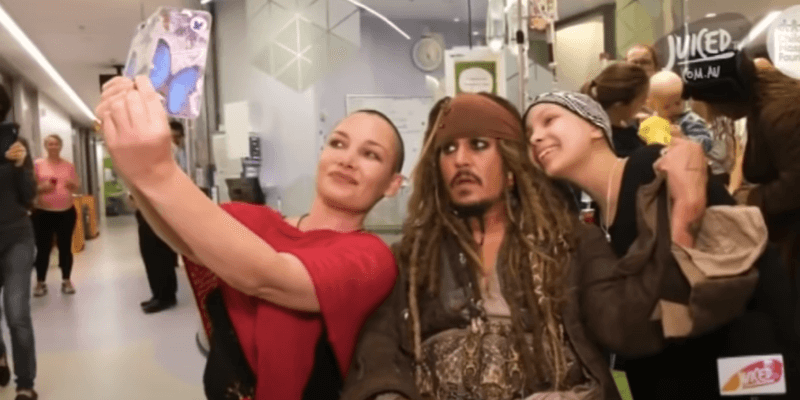 The dramatic legal battle between Pirates of the Caribbean star Johnny Depp and Amber Heard has been a tumultuous one, with new information arising faster than Jack Sparrow finding rum.

The allegations began when Heard (Aquaman) accused her ex-husband Johnny Depp of domestic abuse charges in an article in U.K. Newspaper Group news publication, The Sun. Depp’s lawyer and his legal team have fought these claims and denied them at every turn.

Recently, Depp lost his libel case against The Sun. Then, even more recently, the U.K. court system ruled that Depp cannot appeal the original verdict.

That being said, if there is one thing Depp has kept throughout this entire situation, it is his fans. Johnny Depp fans have been incredibly loyal to the Alice in Wonderland actor as he has had his life publicly on trial for the past year.

From hundreds of thousands of fans creating a petition to have Disney bring Depp back for Pirates of the Caribbean 6, to them creating a #JusticeforJohnnyDepp hashtag that has dominated the likes of Twitter, fans do not want to see Depp replaced in anything — whether it be the Pirates of the Caribbean films or Disney attractions, as well as within the Fantastic Beasts franchise.

Warner Bros. asked Johnny Depp to step down from his role as Gellert Grindelwald in Fantastic Beasts 3. Mads Mikkelsen is currently set to take over Depp’s character in the Fantastic Beasts franchise.

Now, it seems that his fans have come together through the #JusticeforJohnnyDepp community to donate $40K in Depp’s name to the charities that Amber Heard allegedly “lied” about donating her divorce settlement to. According to People:

Speaking at the Court of Appeal in London on Thursday, Depp’s lawyers appealed the November 2020 judgment on the grounds that Amber Heard’s pledge to donate her $7 million divorce settlement to charity was a “calculated and manipulative lie” that “subliminally” influenced the original trial judge.

According to Depp’s attorney, Andrew Caldecott, Heard’s highly publicized charitable pledge tipped “the scales against Mr. Depp from the very beginning” in the mind of libel trial judge Mr. Justice Nicol, who ruled that a 2018 article in The Sun newspaper depicting Depp as a “wife-beater” was “substantially true” on Nov. 2.

Heard reportedly pledged to donate this amount over 10 years. However, she has apparently not been able to use the divorce settlement in full due to the legal fees that have accumulated from the ongoing case.

At the moment, Heard’s attorneys have been able to prove that the actress has donated just under $2 million to the charities she promised, and has plenty of time to donate the rest over the years to come.

These are the two charities to which Amber Heard is expected to donate her entire divorce settlement over time.

Stevie (@StevieJRaw) took to Twitter to showcase the online donation pages in which fans have been donating with the #JusticeforJohnnyDepp hashtag highlighted on both pages.

Across 2 charities the kind #JusticeForJohnnyDepp community have raised a huge $37,246 ???

Recently, there has been more evidence brought to light regarding the court case, where Depp has now publically released LAPD body camera footage of the night that the allegations were called into the police. To read more on that, click here.

At the moment, as we mentioned earlier, Depp has lost his battle with The Sun, but this evidence could sway in his favor during the U.S. court case in April 2022.

Depp has been known to do a lot of work with children’s hospitals, as you can see in the YouTube video below by
On Demand Entertainment, so aside from the relation to Amber Heard, these charities do have a close tie to the actor. Recently, Depp spoke to Spanish newspaper, El Pais, and shared how he still enjoys dressing as Jack Sparrow and visiting children’s hospitals. Read more of his comments about what Jack Sparrow means to him here.

Johnny Depp has starred in a wide variety of films including Sweeney Todd, Pirates of the Caribbean, Alice in Wonderland, Secret Window, Charlie and the Chocolate Factory, 21 Jump Street, The Lone Ranger, Public Enemies, and many more, which is where his large fan base stems from.

Stay tuned to Inside the Magic as we continue to report on the ongoing Johnny Depp drama.

What do you think of the ever-evolving legal case between Mr. Depp and Mrs. Heard?