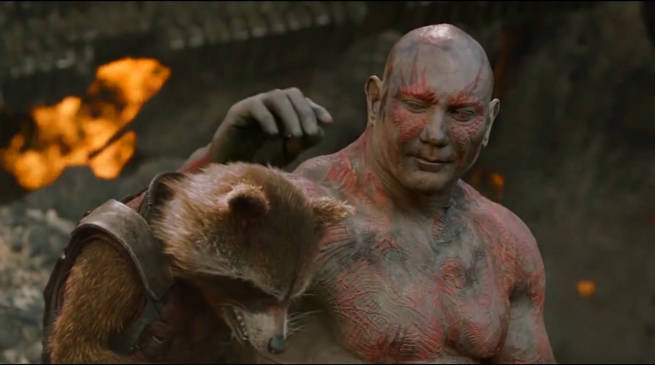 Actor and former WWE pro wrestler Dave Bautista made a name for himself in the Marvel Cinematic Universe as Drax the Destroyer in the Guardians of the Galaxy franchise alongside the Benatar’s motley crew Chris Pratt (Peter Quill/Star-Lord), Rocket Raccoon (Bradley Cooper), Vin Diesel (Groot), Zoe Saldana (Gamora), Karen Gillan (Nebula), and more.

Now, however, Bautista has spoken out about the fact that the entire Guardians franchise is likely ending after the trilogy. In a recent interview, he shared:

The Knives Out 2 actor went on to say:

“You know, all things must end. And, you know, I’m looking forward to kind of wrapping this up with my friends and family.”

For now, Bautista fans can look forward to seeing the actor in Dune on October 22 in both theaters and on HBO Max. And, with the Marvel Multiverse in full swing, who’s to say where Drax could potentially show up in the future?

More on Guardians of the Galaxy

The official description of the original Guardians of the Galaxy reads:

An action-packed, epic space adventure, Marvel Studios’ Guardians of the Galaxy expands the Marvel Cinematic Universe into the cosmos, where brash adventurer Peter Quill finds himself the object of an unrelenting bounty hunt after stealing a mysterious orb coveted by Ronan, a powerful villain with ambitions that threaten the entire universe.

To evade the ever-persistent Ronan, Quill is forced into an uneasy true with a quartet of disparate misfits: Rocket, a gun-toting raccoon; Groot, a tree-like humanoid; the deadly and enigmatic Gamora; and revenge-driven Drax the Destroyer. But when Quill discovers the true power of the orb and the menace it poses to the cosmos, he must do his best to rally his ragtag rivals for a last, desperate stand — with the galaxy’s fate in the balance.

What do you think about Guardians of the Galaxy 3 ending the franchise?

Comments Off on Dave Bautista Confirms End For ‘Guardians of the Galaxy’: “We’re Wrapping It Up”