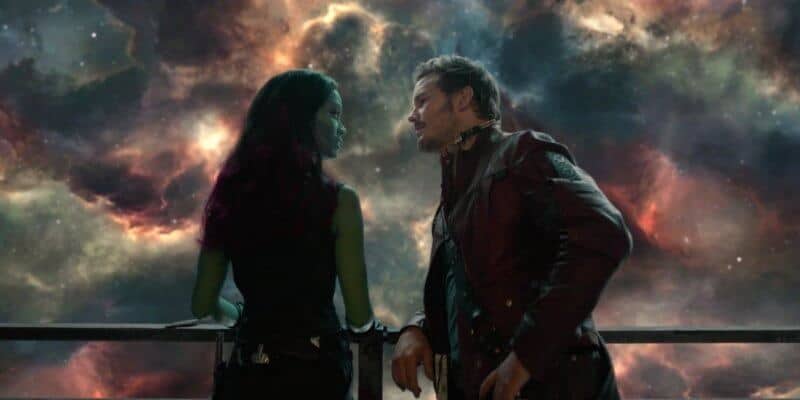 Gamora’s return in Avengers: Endgame is certainly a satisfying moment for Marvel fans. However, did you ever stop and wonder, “What happened to the Guardians within her timeline?”

Gamora is from another timeline – remember?

A quick recap first. Our Gamora (played by the wonderful Zoe Saldana) was first introduced in Guardians of the Galaxy (James Gunn, 2014), where she meets up with Peter Quill (Chris Pratt), Rocket Raccoon (Bradley Cooper), and the rest of the Guardians. This Gamora reappears in Guardians of the Galaxy Vol.2 (James Gunn, 2017) as the gang take on Ego, the living planet (Kurt Russell, father of Falcon and Winter Soldier star Wyatt!).

The final appearance of the original Gamora is in Avengers: Infinity War, as she takes center stage. However, it’s this film that the seed of a problem is planted. Marvel fans around the world will never forget the heartbreaking moment where Thanos (Josh Brolin) sacrifices his favorite daughter to obtain the soul stone on Vormir. Unlike the trickster Loki, Gamora isn’t faking her death. This version of the character has stayed dead.

Yet, Zoe Saldana also stars in Avengers: Endgame; a direct sequel to Infinity War. How is Gamora back? Time travel, of course! Yes, as Captain America (Chris Evans), Tony Stark (Robert Downey Jr), and Nebula (Karen Gillan) travel back in time, they inadvertently unleash an alternate Thanos. And with that alternate Thanos comes an alternate Gamora (who for some reason isn’t “snapped” alongside the rest of Thanos’ forces by Iron Man). However, this daughter of Thanos has no memory of Star Lord, Groot, Drax, or any of her former friends. This is why she gives Peter Quill a nasty kick in the groin instead of a loving embrace.

Related: ‘Guardians’ Down Under: Stars Arrive in Australia for ‘Thor 4’

Ok, so what’s the problem with Gamora’s return?

The issue isn’t with bringing a new Gamora into the main Marvel Cinematic Universe timeline. The issue is what’s going to happen to the old universe. So, Gamora’s old timeline obviously doesn’t have to contend with Thanos anymore, which is great for just about everyone. However, does this mean that that universe never sees the Guardians of the Galaxy team up?

We know that Peter Quill was knocked out by Nebula and War Machine (Don Cheadle) before he could claim the power stone. So regardless of all the Gamora shenanigans, that means that the Guardians would never meet on Xandar, they’d never fight Ronan the Accuser (Lee Pace), and never join together as a team.

But it keeps going, and the later implications are even more terrifying. Without Gamora, would Star Lord ever have come across his father, Ego? And if he did, who would be there to stop the living planet from turning every planet into a copy of himself, thereby destroying all life in the universe?

Steve Rogers might have returned the infinity stones, but that doesn’t mean he fixed the universes that they came from. So the next time we see Gamora on screen in Guardians of the Galaxy vol. 3, just save a thought for her universe!

Did Gamora’s return have unforeseen consequences? Let us know in the comments below.

Comments Off on Did Gamora’s Return in ‘Endgame’ Break the GOTG Timeline?