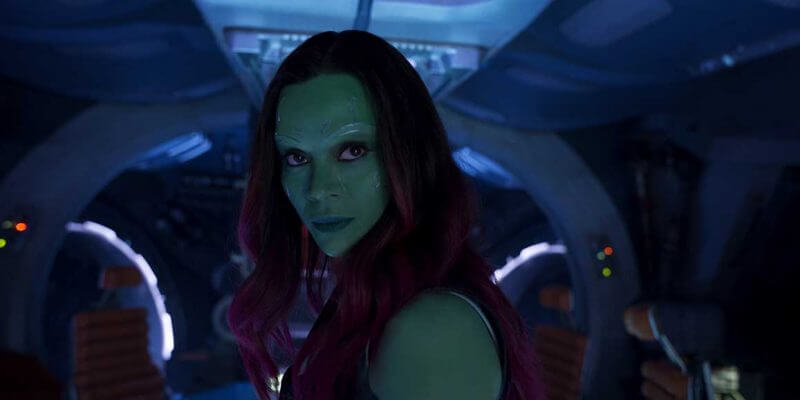 James Gunn just reminded us all how much we miss Zoe Saldana as Gamora.

The Guardians of the Galaxy director shared a throwback picture on his Instagram page showing some pretty unnerving Gamora masks.

It’s certainly been a big week for the Marvel star, as two films she starred in — Avengers: Endgame (2019) and Avatar (2009) — battled for the title of highest-grossing movie of all time.

When looking at these photos on James Gunn’s Instagram, we, too, want to know — just why? The director shared this hilarious snap, which captures Zoe Saldana posing with two unused designs for the green hero’s face. The result is pretty creepy! Take a look for yourself.

Gamora with #Gamora masks (that we never used) during a screen test. #gotg #bts #guardiansofthegalaxy

Several bemused viewers chimed in with hilarious responses, including Simon Pegg, Saldana’s Star Trek co-star. He said: “The middle one is the real Zoe, right?” We’re sure glad that Gunn, Kevin Feige, and the team decided to go with the design we all know and love in Guardians of the Galaxy!

It’s been an interesting week for Zoe Saldana

As you may have heard, Avengers: Endgame was dethroned as the best performing movie of all time. However, this probably hasn’t bothered star Zoe Saldana as she also features in the film that overtook it: Avatar!

Yes, the star of Guardians of the Galaxy also features in the James Cameron epic, making her truly one of a kind in the world of Hollywood. Saldana has been a big part of the Marvel Cinematic Universe since 2014 when she first appeared alongside co-stars like Chris Pratt and Bradley Cooper.

We should be catching up with everyone’s favorite daughter of Thanos (sorry, Nebula fans) in Guardians of the Galaxy vol. 3, which sadly isn’t until 2023! However, we know that some of the Guardians will be appearing in Thor: Love and Thunder next year, so you never know…!

Regardless, those unused Gamora masks sure give us the creeps now that we’ve seen the real thing!

Who is Gamora in the Marvel Cinematic Universe?

Gamora is an essential member of the Guardians of the Galaxy and a one time ally of the Avengers. She is an adopted daughter of Thanos, the Mad Titan. In fact, we see her adoption in a flashback sequence during the events of Avengers: Infinity War when her adopted father torches her home planet of Zen-Whoberi and murders half of its inhabitants.

After that, she and her adopted sister Nebula train to impress their father. However, Gamora secretly plans to escape and undermine Thanos, as we see in the events of Guardians of the Galaxy. She eventually teams up with Peter Quill, Groot, Drax the Destroyer, and Rocket Racoon to save Xandar from the evil Ronan.

She and Quill later develop romantic feelings for each other which are explored as they battle Star Lord’s father; Ego, the living planet. However, the hero meets a tragic end by the hand of her own father on his quest for the soul stone, as she’s sacrificed on Vormir. Yet this isn’t the last we’ll see of Gamora as an alternate timeline version of her without any knowledge of the Guardians appears during the climax of Avengers: Endgame.

Though the character is played by Zoe Saldana, it was recently revealed that Amanda Seyfried was offered the role. Seyfried reportedly turned down the role after fearing that Guardians of the Galaxy would bomb at the box office.

Gamora and the future of the MCU

It’s way too long to wait and see Zoe Saldana back as Gamora. Though the infinity stone storyline may have concluded, we still find ourselves re-watching Avengers: Infinity War, as it’s arguably her biggest role. However, her return in Avengers: Endgame is also a cracker, especially when she joins fellow heroes like Black Widow, Captain Marvel, and Wanda Maximoff. Fingers crossed she’ll reunite with at least some of these heroes, such as Thor (Chris Hemsworth) in the upcoming Thor: Love and Thunder.

The character of Gamora has become a fan favorite, and with Marvel Studios’ new focus on creating TV content, we wonder what the future could hold for Zoe Saldana and the rest of the cast of Guardians of the Galaxy. Could there be a show similar to the upcoming Loki which follows members of the Guardians team? Only time will tell.

All we know is that we can’t wait to see Saldana return to one of her most iconic roles. Gamora is an essential part of the Marvel Cinematic Universe and a classic character. Fingers crossed we see her in a future movie soon!

Avengers: Infinity War is directed by The Russo Brothers. It features an all-star cast including Robert Downey Jr as Iron Man, Chris Evans as Captain America, and Benedict Cumberbatch as Doctor Strange. It’s available to stream on Disney+ today.