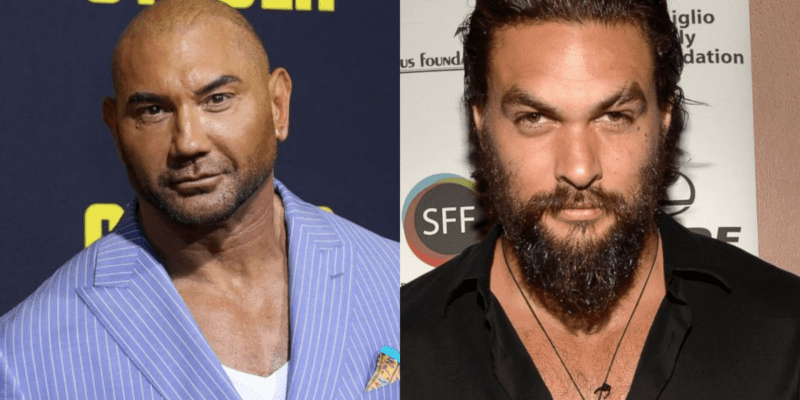 A bidding war for a buddy action comedy pitch from Guardians of the Galaxy (2014) actor Dave Bautista and Aquaman (2018) actor Jason Momoa has come to a close, according to reports. MGM Studios has come out on top of a competitive rush on the Dave Bautista and Jason Momoa project that will be fronted by two of Hollywood’s most in-demand action stars.

According to Deadline, Jason Momoa and Dave Bautista pitched the idea all over Hollywood this past week, which led to a 4-way bidding war to ink the buddy action duo and writer Jonathan Tropper. At the moment, there is no script or director — just a pitch. The promise of two charismatic Hollywood heavyweights co-heading a buddy actioner with comedy elements was an original idea from Bautista, Momoa, and Tropper. MGM Studios will develop the project, described as a “Lethal Weapon-style” movie — referring to the popular late 1980s buddy action comedy franchise starring Danny Glover and Mel Gibson.

Related: Dave Bautista Was Involved in a Physical Altercation at ‘Guardians’ Wrap Party

Bautista and Momoa developed a bond working on the Apple+ drama, See, which just wrapped its second season for the streamer. The two also featured in the recent sci-fi epic from Denis Villeneuve, Dune (2021) for Warner Bros., and HBO Max.

The excitement around the potential Bautista and Momoa team-up ramped up quickly, stemming from a Tweet by the media-savvy social Bautista this summer that said:

“Just going to throw this out into the atmosphere and see wat happens. Here we go…Me and Momoa in a Lethal Weapon type buddy cop movie directed by David Leitch. Ok! There it is. Now we wait.”

Just going to throw this out into the atmosphere and see what happens. Here we go… Me and Momoa in a Lethal Weapon type buddy cop movie directed by David Leitch. Ok! There it is. Now we wait.😬

As the project is in early development, the timeline is currently up in the air. Dave Bautista just began filming Guardians of the Galaxy Vol. 3 for Marvel Studios and director James Gunn. The film is expected to be Bautista’s last appearance as Drax in the Marvel Cinematic Universe and will hit theaters in 2023.

Jason Momoa will revisit his breakout role as Aquaman with the upcoming sequel Aquaman and the Lost Kingdom due out for Warner Bros. in 2022.

Are you excited to see Dave Bautista and Jason Momoa team up for a buddy action cop movie? Let us know in the comments!