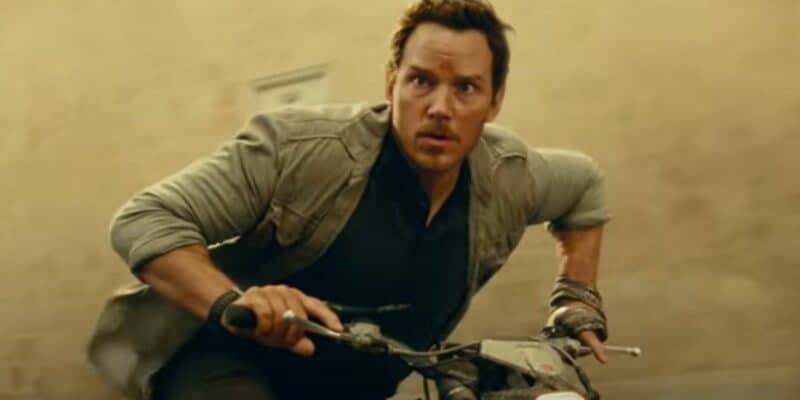 Jurassic World Dominion (2022) has finally reached $1 billion at the global box office. And though the latest Jurassic Park/Jurassic World sequel has been poorly received by critics, evidently fans have kept the movie in theaters, as the numbers speak for themselves.

The sixth installment in the long-running franchise that started with Steven Spielberg’s Jurassic Park (1993) is also the second highest-grossing movie of 2022. So we think it’s time to celebrate the action-packed, globe-trotting sequel in the best way we can.

Hold onto your butts, because here are the five greatest moments in Jurassic World Dominion.

Seeing dinosaurs exploring snowy environments is definitely a first for the Jurassic Park/Jurassic World franchise, and those early Jurassic World Dominion trailers definitely caught our attention, as these shots make for some of the most visually arresting in the film.

But there’s one scene in particular that stands out well above the rest, and it’s when we’re reunited with Blue the Velociraptor, who, in the four years that have passed since Jurassic World: Fallen Kingdom (2018), has had an offspring, which Maisie Lockwood (Isabella Sermon) names “Beta”.

Not far from Maisie’s cabin in the Sierra Nevada mountains, where she lives with Claire Dearing (Bryce Dallas Howard) and Owen Grady (Chris Pratt), we see Blue and Beta emerge from an abandoned school bus before dashing through a wintry setting to a whimsical score.

There are so many things to love about the illegal dinosaur trade market in Malta, whether it’s because it opens up the Jurassic Park/Jurassic World universe in ways never before seen, or the fact that it looks like something straight out of Star Wars: Episode IV — A New Hope (1977)!

In fact, this may have been director Colin Trevorrow’s way of honoring the Star Wars movies, especially seeing as he was initially on board to direct Star Wars: Episode IX — The Rise of Skywalker (2019) before departing the project over “creative differences”.

Nevertheless, it’s an awesome sequence, because for the first time we see the dark underworld of illegal dinosaur trading, where Claire Dearing and Owen Grady begin their search for Maisie Lockwood. Here’s to hoping this concept will be followed up in a live-action Jurassic TV series!

Hot on the heels of the black market scene is the chase sequence that takes place on the streets of Malta, which finds Owen Grady trying to outrun a pack of deadly Atrociraptors on his motorcycle (gone are the days when he used to ride alongside raptors in the jungle).

This entire chase is edge-of-your-seat stuff, as Owen encounters many close calls with his incredibly fast pursuers, as does Claire, who is busy trying to outrun one of them along the rooftops, before teaming up with pilot Kayla Watts (DeWanda Wise) in an attempt to save Owen.

But it’s not just Atrociraptors Owen needs to worry about, as he sees a Carnotaurus and an Allosaurus wreaking havoc in the town square, where an unsuspecting man on a scooter ends up getting eaten alive! Fortunately, Owen makes it onto Kayla’s plane before becoming dino-lunch.

But where the dinosaurs are concerned, it also ticks a box that had started to gather dust. One dinosaur in particular — though it is technically not a dinosaur, as it’s actually a “Permian” reptile — is the Dimetrodon, which, for the first time in Jurassic history, finally makes an appearance.

Seeing the Dimetrodons emerge from the shadows of the Amber mines — where Grant, Sattler, and Maisie find themselves trapped — is the stuff of nightmares. And to give us yet another reason to punch the air (and shudder), there’s no CGI — the Dimetrodons are entirely animatronic.

Dr. Ian Malcolm has been a fan-favorite character since the original Jurassic Park. He returned as the main character in The Lost World: Jurassic Park (1997), however, in Jurassic World: Fallen Kingdom, he has only a small role that bookends the film.

In Jurassic World Dominion, however, he’s one of the many main characters, and boy is he dialled up to 11. Malcolm is a beloved hero in the Jurassic Park/Jurassic World franchise, but like many other characters, he isn’t perfect, and as such, makes some mistakes along the way.

One of those mistakes is in Jurassic Park, when, in a panic, he ruins Grant’s plan of luring the T-Rex away by lighting up another flare. But Malcolm finally rights this wrong in the new film, as he launches a flaming spear into the jaws of the Giganotosaurus to distract it from his friends!

What are your favorite moments from Jurassic World Dominion? Let us know in the comments down below!

Comments Off on The 5 Greatest Moments In ‘Jurassic World Dominion’