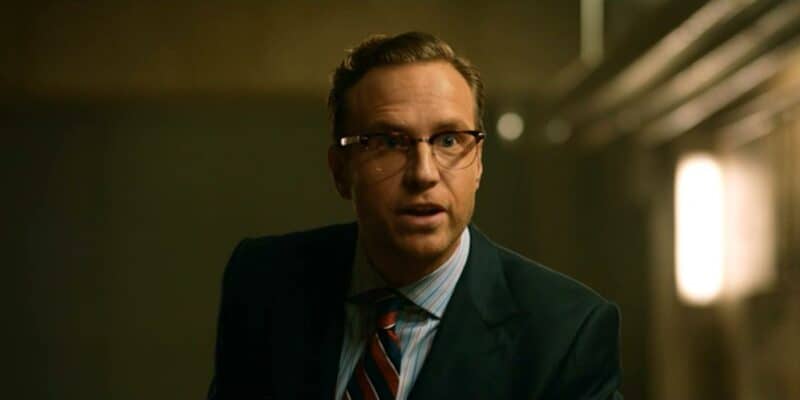 There have been six Jurassic Park/Jurassic World movies so far, and with the exception of Jurassic Park III (2001), every one has its own human villain (although, fortunately, there are two such antagonists in Jurassic World: Fallen Kingdom).

So, now that Jurassic World Dominion (2022) is finally out on DVD, Blu-ray, and Digital (be sure to check out the “Extended Edition”), it’s time to look at all the major villain deaths throughout the entire film series, to see who gets the best comeuppance!

So here are all the major villain deaths ranked from worst to best.

Game hunter and mercenary Ken Wheatley (Ted Levine) isn’t the main human antagonist in Jurassic World: Fallen Kingdom — that honor goes to Eli Mills (Rafe Spall) — but he’s definitely one of the movie’s big bads, and as such, we’ve decided to include him on our list.

Wheatley is perhaps the most idiotic human villain in the entire Jurassic Park/Jurassic World franchise, and that’s really saying something. His hobby of collecting teeth from living dinosaurs sees him voluntarily enter the Indoraptor’s cage after he tranquilizes the animal.

But, of course, the Indoraptor is just toying with him (it even smiles, although this can be explained by a major twist you probably missed). While Wheatley definitely gets his just desserts, this kill is far more watered-down than it needed to be, which is why it’s at the bottom.

Many diehard Jurassic Park fans were excited to see the character of Lewis Dodgson make a long-awaited return in Jurassic World Dominion, having only appeared in the original Jurassic Park (1993) and the novels “Jurassic Park” (1990) and “The Lost World” (1995) by the late author Michael Crichton.

However, this time, Dodgson is played by Campbell Scott and not Cameron Thor. But this is a good thing, as he’s essentially a different character — he’s more of an Elon Musk/Steve Jobs type rather than the evil crook we know from the original film and Crichton’s book.

Lewis Dodgson is the corrupt head of Biosyn, so seeing him get taken on by three dilophosaurs in a train car is poetic justice (Dennis Nedry, whom he hired to steal embryos in Jurassic Park, meets the same fate). The only downside is, like most kills in Dominion, it happens off screen.

It’s easy to think of InGen Security Head Vic Hoskins (Vincent D’Onofrio) as yet another stupid villain in this franchise — and indeed he is — but we actually admire his long-term goals, which would have seen him utilizing Owen Grady’s semi-domesticated velociraptors in the battlefield.

It’s an absurd plan, for sure, and one that backfires horribly, but it’s a subtle nod to an unused Jurassic Park 4 script which also involved trained raptors (it would have even featured dinosaur/human hybrids, which is subtly referenced in Jurassic World: Fallen Kingdom).

In Jurassic World (2015), when InGen is gathering embryos from the lab during the evacuation, Hoskins is halfway through delivering a speech about how “dinosaurs are the gift that keep on giving”, when he’s interrupted by one of Owen’s raptors, which begins to eat him arm first. Ouch.

You might be wondering why Dennis Nedry isn’t at the top of this list, especially considering he’s the only real fan-favorite character when it comes to Jurassic Park/Jurassic World villains. But these rankings are based on the characters’ comeuppances alone, and not their villainous nature.

Dennis Nedry is, of course, an iconic Jurassic Park (1993) character, and unlike many other villains in the series, isn’t as one-dimensional. He’s a disgruntled InGen employee who feels that he’s underpaid and undervalued at Jurassic Park (which is more than likely the case).

This is explored a bit more in the novel “Jurassic Park”, but it doesn’t change the fact that Dennis Nedry is greedy, which ultimately lands him on the wrong end of the food-chain. After being attacked by a small dilophosaurus, Nedry ends up trapped in a jeep with one of its big brothers.

Peter Ludlow’s tenure as the newly-appointed InGen CEO in The Lost World: Jurassic Park (1997) is so short-lived, it would have likely discouraged anyone else from taking on the role. Ludlow (Arliss Howard) is John Hammond’s nephew, without the whimsy and charm of his uncle.

He isn’t best described as “cruel” or “greedy”, though — he simply wants to seize control of InGen and utilize its assets to prevent any further financial loss following the incident at Jurassic Park. But his aspirations get the better of him when he decides to take dinosaurs from Isla Sorna/Site B.

Following the tyrannosaurus rex’s rampage in San Diego, in a last-minute attempt at damage control, Ludlow finds himself in the cargo hold of the SS Venture where he tries to re-capture the infant rex. But the rex’s father has another idea — teach its offspring a lesson in hunting.

In Jurassic World: Fallen Kingdom, Eli Mills is the “brains” behind the operation that involves taking dinosaurs from Isla Nublar and selling them at a black market auction in Lockwood Manor, which he hopes will make him enough money to produce more Indoraptors.

Though very much a two-dimension villain (though not half as much as the buyers at the auction), Mills is brilliantly played by Rafe Spall. He’s also the most cruel human villain in the series, as he ends up murdering Benjamin Lockwood (James Cromwell)!

So, it’s just as well that his demise has earned him the top spot. After thinking he’s had a lucky escape from the stampede of dinosaurs that thunders out of Lockwood Manor and into the Sierra Nevada Forest, Mills becomes supper for the tyrannosaurus rex and a carnotaurus!

Who is your favorite Jurassic villain in the Jurassic Park/Jurassic World franchise? Let us know in the comments down below!