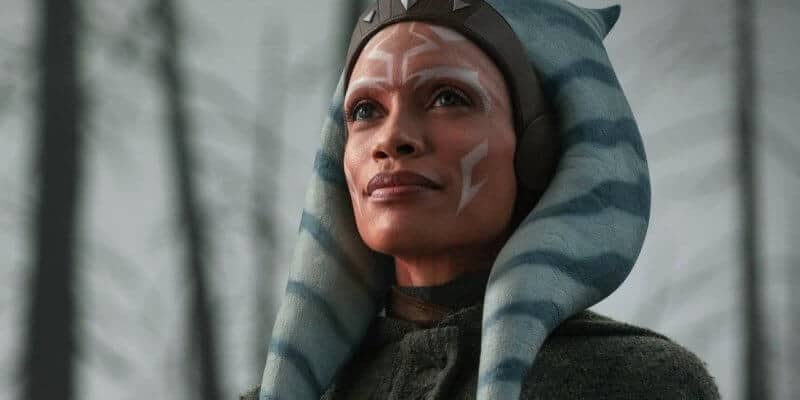 On September 21, the fourth live-action Star Wars show will debut on Disney+. However, while Andor (2022) certainly looks promising, it’s fair to say that the most highly-anticipated entry in the “MandoVerse” is Ahsoka (2023).

The show will see the return of Rosario Dawson as the titular Togruta Jedi, who made her first appearance in The Mandalorian Season 2, having previously only ever appeared in the animated shows Star Wars: The Clone Wars (2008) and Star Wars: Rebels (2014).

Since her live-action debut, Ahsoka Tano has also enjoyed a brief role in The Book of Boba Fett (2021) alongside Luke Skywalker (Mark Hamill). And later this year, her Clone Wars-counterpart is set to return in the miniseries Star Wars: Tales of the Jedi (2022).

Ahsoka has long been rumored to serve as a sequel to Rebels. Speculation grew after the casting of Natasha Liu Bordizzo as Mandalorian Sabine Wren, and Rosario Dawson being joined on stage by Astromech droid Chopper during this year’s Star Wars Celebration.

And then, of course, there’s Ahsoka’s appearance in The Mandalorian (2019), during which she reveals that she’s in pursuit of fan-favorite Rebels villain Grand Admiral Thrawn. And now, Rosario Dawson has confirmed that this will indeed be the case in the new series.

Appearing at the Chicago Comic and Entertainment Expo (via Laughing Place), Dawson confirmed that Thrawn will be the main focus in the upcoming Disney+ series, as long suspected by Star Wars fans. When asked about Thrawn’s whereabouts, here’s what Dawson said:

“That dude [Thrawn], man… incognito. Maybe we get the Scarlet Witch to help us, she can jump through Multiverses, right? Let’s go, girl! Yeah, I mean, that’s a really big key kind of giveaway in Mando about what my show could potentially be about. Obviously, we are really trying to track [Thrawn] down, so we’ll see what happens…”

Thrawn was last seen in the Season 4 and series finale of Rebels, in which young Jedi Ezra Bridger (Taylor Gray) calls upon the help of the Purrgil — incredibly powerful, whale-like creatures that use Hyperspace to travel among the stars — to save his friends from Imperial forces.

Thrawn (Lars Mikkelsen) becomes wrangled in their tentacles, and when the purrgil jump into Hyperspace, both he and Ezra disappear with them. An epilogue reveals that Ahsoka Tano (Ashley Eckstein) and Sabine Wren (Tiya Sircar) plan to team up to find their lost friend.

While plot details are naturally being kept under wraps, it’s safe to say that this will be the main focus in Ahsoka. However, Star Wars fans continue to speculate that the show will also feature the “World Between Worlds”, a concept that was introduced in Rebels Season 4.

The World Between Worlds is a mystical dimension where time and space do not exist. In the episode of the same name, Ezra and Ahsoka learn that the realm, which is seemingly only available to the most powerful Force users, is a place from which one can change the past.

Dawson’s comments about Ahsoka needing the help of Elizabeth Olsen’s Wanda Maximoff/Scarlet Witch from the Marvel Cinematic Universe, as she is able to “jump through Multiverses”, is seemingly a joke (although who wouldn’t want to see Olsen show up in the faraway galaxy?), but Dawson could actually be hinting towards something legitimate.

The idea of a Star Wars multiverse has been very appealing ever since the vastly disappointing sequel trilogy entries Star Wars: Episode (VIII) — The Last Jedi (2017) and Star Wars: Episode (IX) — The Rise of Skywalker (2019), with fans still hoping those films will be wiped from canon.

If the World Between Worlds is used in Ahsoka, though, it could at the very least explain her whereabouts during all three Star Wars trilogies. But either way, it looks like we’ll be learning more about her character in this year’s Tales of the Jedi first.

And speaking of canon, “Ahsoka” (2016) author EK Johnston recently took to Twitter to hit back at fans who are suggesting that the upcoming animated series will retcon elements of her book, which was approved by Ahsoka Tano creator Dave Filoni.

While it seems that the whereabouts of Thrawn and Ezra will play a significant role in Ahsoka, it remains to be seen whether the two characters will actually make their live-action debut in the show, or if they’ll simply remain elusive, driving the plot from a great distance.

It has long been rumored that Lars Mikkelsen (brother of Mads Mikkelsen) will reprise his role as Grand Admiral Thrawn, having voiced him in Rebels. Meanwhile, fans continue to call for Aladdin (2019) actor Mena Massoud to play Ezra Bridger in the upcoming show.

It’s also unknown as to whether or not Ahsoka will feature flashbacks like Obi-Wan Kenobi (2022), as Hayden Christensen will be reprising his role as Anakin Skywalker/Darth Vader, Ahsoka’s former Jedi Master. Should this be the case, we may see a younger actress play Ahsoka.

Do you think Ahsoka will introduce the Star Wars multiverse? Let us know in the comments down below!