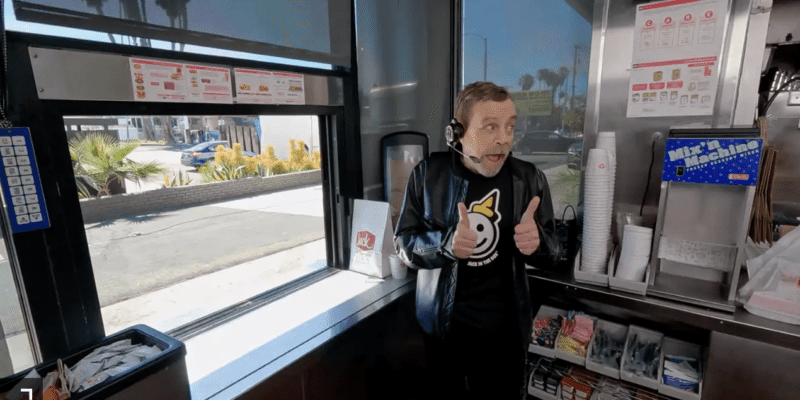 Credit: Jack in the Box

During his stint at Los Angeles City College, young Hamill, now 70, worked at Jack in the Box slinging burgers and fries for a brief time before being fired (although he says there were no hard feelings between him and his manager!) People Magazine shared details:

“I always aspired to work the window, right? I wanted to be on the speaker, and instead I was always in the back. And when I got my chance at it, I blew it,” says the Star Wars actor. When he finally got to take orders through the speaker, which used to project from the chain’s clown head mascot, he tried out an exuberant, clown-like voice to say, “Welcome to Jack in the Box. May I take your order?”

“Well, I thought it was clever. The manager thought otherwise,” he laughs. “I was probably really irritating. Anyway, he just told me to go home and never come back.”

Hamill recently got the chance to return to work at a Jack in the Box drive thru, and the Fall of the House of Usher star had an absolute blast. Per People‘s report:

“What are the chances of a former employee who let you go, asking you to come back? It was too good to [pass up]. I said, ‘I’ve got to do this’ because it’s so personal, and it actually happened…”

The actor definitely enjoyed his time during his second go-around at the drive-thru window, even if a few fans asked, “Did anyone ever tell you you look like that guy from Star Wars?” he recalls. “I had so much fun.”

Hamill went on to share some great advice for all of his fans:

“When there’s a setback in your life you have to double down and go right back at it. It wasn’t like I was disillusioned like, ‘Oh no, I’ll never work again.’ I just thought, ‘Okay, that happened. Now how can I go to the next job and make sure that doesn’t happen again?’ It’s all part of life experience that prepares you for whatever you’re aiming for.”

Related: Daisy Ridley’s Rey “Flies in the Face of Everything George Lucas Created”

The actor also, of course, made his epic return to the Star Wars universe as a CGI version of Return of the Jedi-era Skywalker in Jon Favreau and Dave Filoni’s The Mandalorian Season 2 finale episode (“Chapter 16: The Rescue”), shocking Star Wars fans everywhere.

Check out a video of Hamill’s Jack in the Box promotion below:

What do you think about Mark Hamill returning to work at Jack in the Box decades later?