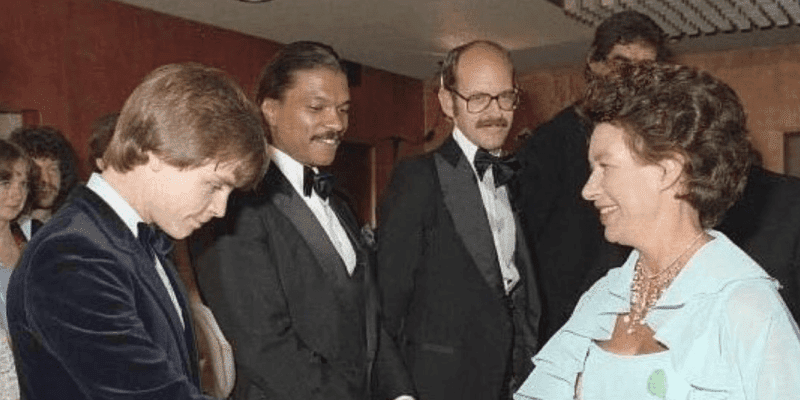 Star Wars actor Mark Hamill has been playing Jedi Knight Luke Skywalker in the Skywalker Saga for over 40 years, first in George Lucas’s original trilogy and then in Disney’s sequel trilogy (for better or for worse).

Related: Disney Might Finally Be Turning Its Back on Kathleen Kennedy’s ‘Star Wars‘

Over the decades, Hamill and his costars — including Harrison Ford (Han Solo), Billy Dee Williams (Lando Calrissian), and the late Carrie Fisher (Princess Leia Organa) — have had all sorts of incredible opportunities thanks to their involvement in the mega-popular Star Wars franchise.

Today, Hamill shared a hilarious story about the time the cast got to meet Princess Margaret, the only sibling of the reigning Queen of England, Queen Elizabeth II. He wrote on Instagram:

This photo was taken moments after Billy Dee informed me that direct eye contact with royalty was punishable by prison and/or beheading (note #BillyDee’s sly enjoyment of his prank, as #FrankOz looks on) Obviously, I wasn’t taking any chances!

Hamill, in sharp contrast to Harrison Ford’s distaste for the Star Wars universe, has long embraced the Star Wars fan community. He often makes videos for fans and even reached out to healthcare workers throughout the height of the COVID-19 pandemic last year.

Most recently, Hamill thrilled fans when he appeared as a CGI de-aged version of Skywalker during the Episode VI: Return of the Jedi (1983) era in The Mandalorian Season 2 finale episode. Showrunner Jon Favreau, executive producer Dave Filoni, and episode director Peyton Reed kept the cameo appearance completely under wraps, shocking everyone when the finale aired.

Although he has only appeared in one episode of The Mandalorian saga, Skywalker has already played a huge role in propelling Din Djarin (Pedro Pascal) and Grogu’s story forward. He rescued Djarin and his crew from Moff Gideon’s (Giancarlo Esposito) Dark Trooper squadron and became the tiny foundling’s Jedi Master, ultimately setting up a more prominent role for the iconic character moving forward.

At this time, nothing about Hamill’s future in the Star Wars galaxy has been confirmed. Both the actor and Marvel star Sebastian Stan have, however, spoken out about the possibility of Stan playing a young version of Luke, either in The Mandalorian saga or in the rumored Luke Skywalker series.

Again, though, Disney and Lucasfilm have not confirmed anything about the Jedi Master’s future in the franchise.

Nonetheless, Hamill has expressed gratitude for the opportunity to once again play Luke, and has indicated that it was an experience he didn’t even know he needed.

Do you hope Luke Skywalker (and Mara Jade Skywalker) are in The Mandalorian moving forward? What do you think about Hamill’s latest hilarious Star Wars story?