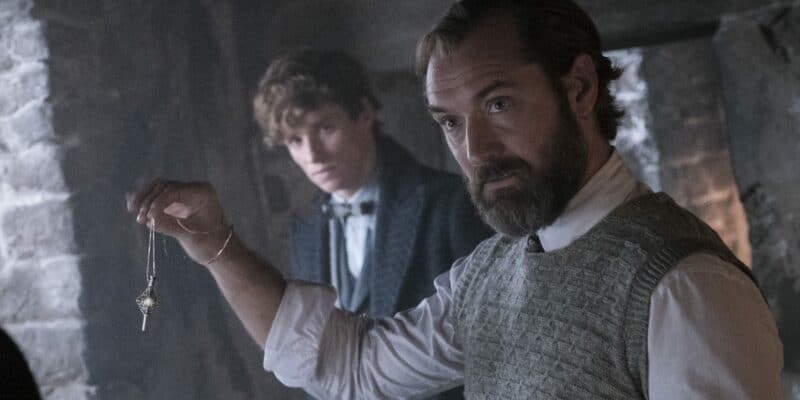 Things haven’t been looking great for the Fantastic Beasts spin-off series for some time. While it got off to a very promising start with Fantastic Beasts and Where to Find Them (2016), the first spin-off in the Harry Potter franchise, things have been on the decline ever since.

While the first movie captured the heart-warming magic of the early Harry Potter movies, its 2018 sequel Fantastic Beasts: The Crimes of Grindelwald (2018) was considered a hot mess, performing poorly at the box office (by Harry Potter standards) while dividing the fanbase.

Over the four years that followed, Johnny Depp, who plays dark wizard Gellert Grindelwald in the second film, was caught in a whirlwind of controversy when he was accused by ex-wife Amber Heard of domestic abuse, which resulted in a world-famous trial that ended recently.

Depp has won the defamation lawsuit against Heard, but he had already been ushered out of the Fantastic Beasts films by Warner Bros. This resulted in the character of Grindelwald being recast for Fantastic Beasts: The Secrets of Dumbledore (2022).

As such, Mads Mikkelsen stepped into the role, and while the Rogue One: A Star Wars Story (2016) actor was praised for his performance, the film itself was met with a lukewarm reception, and brought in even less than its predecessor, with a total of $396 million worldwide.

If this turns out to be true, it will come as a huge blow to Harry Potter fans all around the world. While many tend to take or leave the Fantastic Beasts movies, which collectively haven’t made a great impression, the eight Harry Potter movies are widely loved by Harry Potter fans.

However, nothing has been confirmed, and these are likely just rumors at present. With that said, resetting the Fantastic Beasts movies only wouldn’t be such a bad idea, and there are many ways the studio can do this without affecting the overall Harry Potter canon.

With the multiverse concept becoming increasingly popular in the world of movies, with the Marvel Cinematic Universe being the first to pilot it on the silver screen, it’s entirely possible that Harry Potter has its very own version of the multiverse.

The 2016 stage production Harry Potter and the Cursed Child (2016) reintroduces the Time-Turner, and its two main characters, Albus Potter and Scorpius Malfoy, use it to try and alter the outcome of the Triwizard Tournament all those years ago, in order to save Cedric Diggory.

It’s possible that this created a Wizarding World multiverse, and seeing as the two-part play is generally considered canon, having been marketed as “the eight Harry Potter story”, this isn’t something Warner Bros. should overlook if they really are planning on hitting the reset button.

But let’s hope that rumors point only to the Fantastic Beasts movies. Better yet, let’s hope that if the next two movies do happen — which is also up in the air following the box office figures and critical reception for the latest film — they’ll be more than enough to fix the Wizarding World.

But it’s not just about reviews and numbers, as the movies have been plagued with controversy since the release of the second entry in 2018. And this transcends the Johnny Depp controversy, with JK Rowling locking horns with the trans community over a number of Tweets.

Actor Ezra Miller, who plays Credence Barebone in the films, was recently arrested on two occasions for alleged assault. So, things haven’t been looking good for Fantastic Beasts for quite some time, and controversy seems to be coming in from all angles.

With all that said, the Harry Potter brand continues to enjoy plenty of success, and no matter the poor box office figures, the lukewarm reviews, and all the controversy surrounding its spin-off series, that hasn’t stopped the wheels from turning on the Wizarding World.

Later this year, Harry Potter fans will be able to enjoy the very first open-world game set in the Wizarding World, with Hogwarts Legacy (2022). Rumors of a Hogwarts-based TV series on HBO Max also continue, although for all we know, this could be the reboot we all fear.

Do you think the Fantastic Beasts series will be wiped from canon? Let us known down in the comments below!