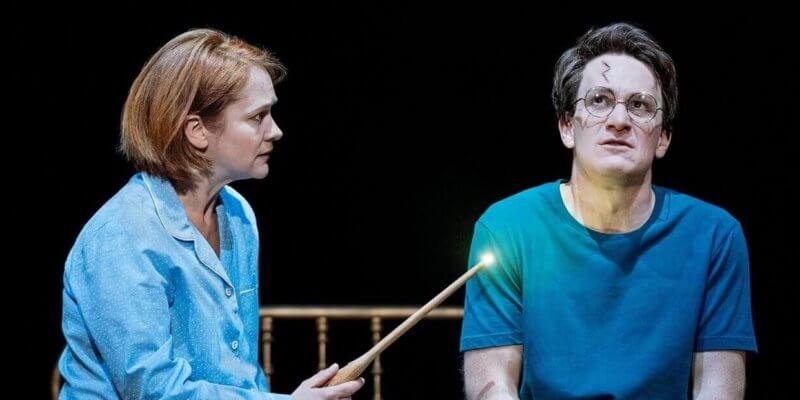 “Harry Potter and the Cursed Child,” which is currently running at the Lyric Theatre on Broadway, is more than just a play. It’s an engrossing, 5 and 1/2 hour experience for “Harry Potter” fans.

The Lyric Theatre was remodeled in preparation for “Harry Potter and the Cursed Child,” making the large venue feel surprisingly intimate. Pre-show, the stage is set at Platform 9 3/4 as the Hogwarts Express prepares to whisk the next generation of witches and wizards to Hogwarts. The show takes place 19 years after the events of “Harry Potter and the Deathly Hallows,” as Harry (now 37 years old), Ginny, Ron, and Hermione send their children off to school.

The play is told in two parts, each running about 2 hours and 40 minutes, including a 20-minute intermission. You can either see both parts in one day with a break in between or enjoy the performances on consecutive nights. I opted for a “Harry Potter” marathon day and saw Part One and Part Two on a Saturday. 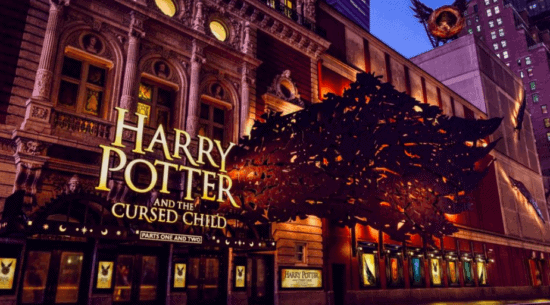 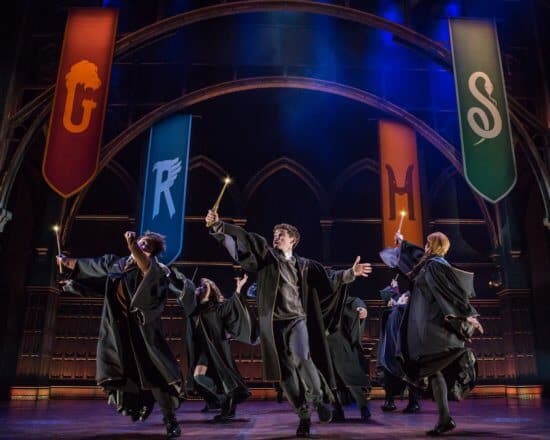 Everyone who sees the show is implored to “Keep the Secrets,” so I won’t go into much detail about the plot. I purposely avoided reading the play beforehand, hoping I’d eventually get to see the show spoiler-free, and I’m glad I waited. During the first few moments of Part One, as Albus Severus Potter, James Potter, and Rose Granger-Weasley stepped onto the Hogwarts Express, I felt the same excitement of cracking open a new “Harry Potter” book without knowing where the story was going to take me.

It’s no surprise, though, that the play is filled with magical moments. Wands are used often, sending spells whizzing back and forth across the stage, and characters speak through portraits suspended in air. Even seated in the second row with a close-up view, I was barely able to see the stage tricks used to create these illusions. 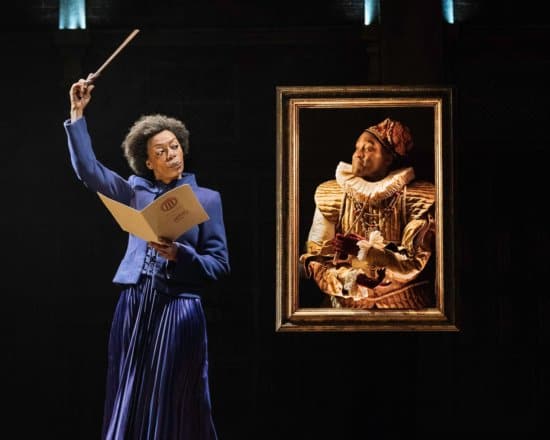 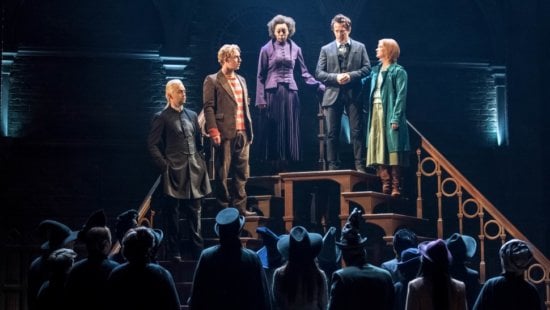 “Harry Potter and the Cursed Child” originally opened in London’s West End on July 30, 2016, and the main cast reprises their roles for the Broadway production. Jamie Parker plays the grown-up Harry Potter, still haunted by his legacy as The Boy Who Lived. Poppy Miller embodies Ginny Potter with a calm fierceness, ready to protect her family at all costs. Noma Dumezweni as Hermione Granger and Paul Thornley as Ron Weasley bring the couple’s familiar love-hate playfulness to the Granger-Weasley marriage. Alex Price is also excellent as Draco Malfoy, who struggles with what it means to be a Malfoy in a post-Voldemort world.

The story focuses heavily on Albus Severus Potter (Sam Clemmett) and Scorpius Malfoy (Anthony Boyle), who try to step outside their parents’ shadows and become heroes in their own right. It seems even with Voldemort gone, the threat of dark magic still lingers in corners of the Wizarding World. 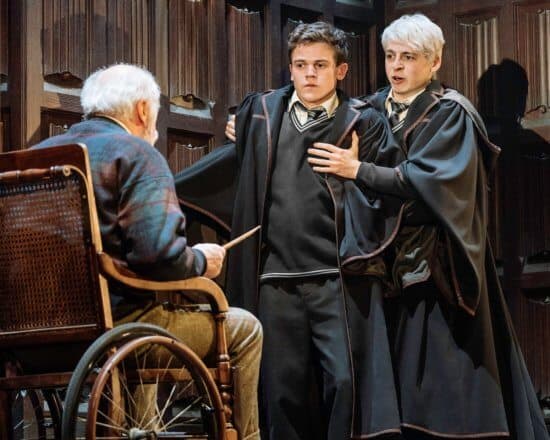 The play is definitely geared toward die-hard “Potter” fans. The mere mention of character names and plot details from the series earned knowing murmurs from the audience. However, if you’re not super familiar with the book series or movies, the Playbill does provide a helpful recap of the story along with some keywords and characters to know (for example, Muggle and Rubeus Hagrid). Also, it’s worth noting that even though the show clocks in at nearly 5 and 1/2 hours, the running time flies by and it will be over before you know it.

Of course, it’s hard for “Potter” fans to leave without a few souvenirs. It was a steamy 98 degrees in New York when I saw the show, and frosé served in souvenir cups ($18) was a popular item at the bar. The gift shop is also filled with pins, t-shirts, and other collectibles, including this black and gold “Cursed Child” tote bag ($20) that I couldn’t pass up. 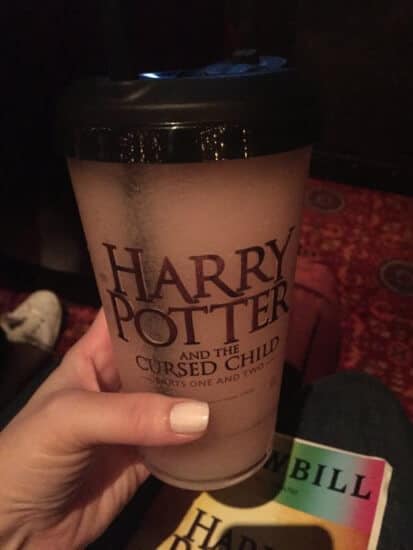 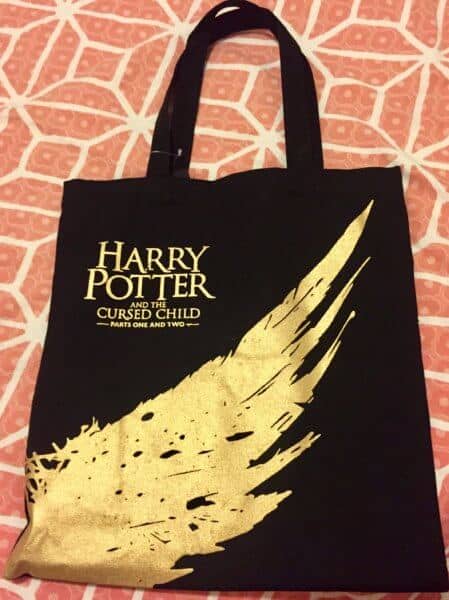 “Harry Potter and the Cursed Child” is performed Wednesday through Sunday at the Lyric Theatre in New York. Tickets are available online or by phone through Ticketmaster, or in person at the Lyric Theatre Box Office. There is also a Cancellation Line on the day of the performance.

If you’re local to New York or have a flexible schedule during your visit, I highly recommend entering the Friday Forty through TodayTix. Every Friday from 12:01 AM – 1:00 PM, you can enter for a chance to purchase tickets for the following week’s performances for only $20 per show ($40 total for Part One and Part Two). Winners can purchase up to two tickets.

For more information, visit the “Harry Potter and the Cursed Child” website.

Comments Off on REVIEW: “Harry Potter and the Cursed Child” brings Wizarding World to life on Broadway