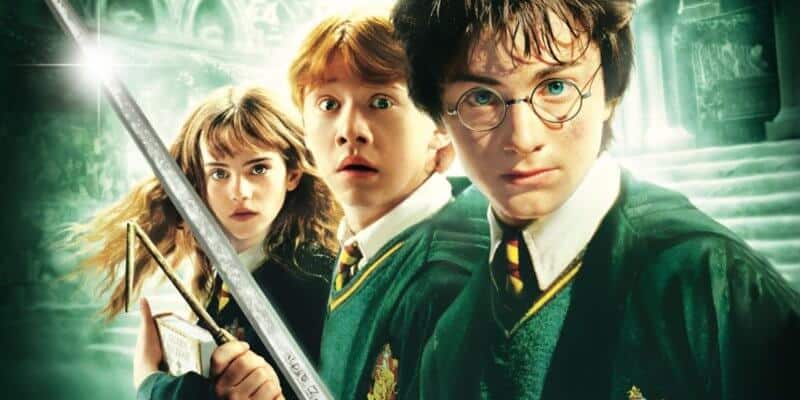 For 10 years, Harry Potter graced our silver screens before finally departing from Platform 9¾. ‘Harry Potter Mania’ took the world by storm, and when it ended, we felt like Harry, Ron and Hermione do at the end of Deathly Hallows – not quite sure what to do with ourselves!

But luckily, a new spinoff series of films started in 2016 with Fantastic Beasts and Where to Find Them, which reunited us with the Wizarding World. Now, with the third entry Fantastic Beasts: The Secrets of Dumbledore set for release on April 8, 2022, let’s revisit some of the most magical movies in history.

Here are all 10 Harry Potter movies ranked from worst to best!

10. Fantastic Beasts: The Crimes of Grindelwald

While placing the sequel to the 2016 hit Fantastic Beasts and Where to Find Them was easy, accepting the fact that a Wizarding World movie could actually be bad wasn’t. 2018’s Fantastic Beasts: The Crimes of Grindelwald lacks the magic of its predecessor and even manages to make a movie set in the Harry Potter universe pretty boring.

But the film is plagued with all sorts of problems, from dull characters to convoluted storytelling, and twists and turns that make very little sense. Now, we’re just hoping that Fantastic Beasts: The Secrets of Dumbledore will perform a memory charm on us to help us forget how underwhelming its predecessor is! Obliviate!

9. Fantastic Beasts and Where to Find Them

It’s possible that this Wizarding World entry would have been higher if its sequel wasn’t so low, but the truth is that it’s difficult to place this above any of the main Harry Potter entries anyway, largely because it doesn’t feature Harry and any other character we had spent years getting to know. Nevertheless, this spot doesn’t mean we think it’s at all bad.

Capturing everything that made Harry Potter so special, while expanding the Wizarding World, the spin-off movie was as full of promise as Star Wars: The Force Awakens had been up until The Last Jedi. And our new trio, Newt Scamander (Eddie Redmayne), Tina Goldstein (Katherine Waterston), and Jacob Kowalski (Dan Fogler) are infectiously charming.

8. Harry Potter and the Goblet of Fire

Placing Goblet of Fire at the eighth spot doesn’t mean we think it’s a bad Harry Potter film – we just think it’s the most annoying of the bunch! Love triangles, arguments, and the same haircuts all around – yes, those adorable little witches and wizards from the first three movies have taken Polyjuice potion and transformed into teenagers!

Fortunately, between all the high school drama, there are some remarkable sequences, from a battle with a dragon to a bone-chilling third act in a graveyard. In fact, if it wasn’t for Harry’s deadly encounter with Voldemort (Ralph Fiennes), this entry might have been forgettable, but the bitter sting in its tail makes it pretty memorable (and still make us cry!).

7. Harry Potter and the Half-Blood Prince

Fans tend to be heavily critical of the sixth installment in the Harry Potter series. While most of the other movies follow their inky counterparts quite faithfully, Half-Blood Prince does abandon a great deal of Voldemort’s interesting backstory in exchange for more palatable and cinema-worthy pacing.

Nevertheless, this is the point in the series where a major tonal shift takes place. While that transformation starts in Goblet of Fire and echoes throughout Order of the Phoenix, this is where everything changes. It’s also the darkest entry – at times, quite literally. In fact, you might need your wand to bring some light while viewing! Lumos!

6. Harry Potter and the Order of the Phoenix

Sandwiched between two of the bleakest films in the series, Order of the Phoenix is perhaps the last entry in which we’re treated to the magic that puts smiles on our faces (as opposed to the battle variety). There are some great sequences here too, from a broomstick flight through London to the battle in the Hall of Prophecies.

However, Order of the Phoenix suffers from an overuse of exposition. While we don’t take great issue with the nature of the montages themselves (whirling and whimsical snapshots of the Daily Prophet), you still might feel a little spoon-fed by the end of it. But the third act’s epic battle in the Ministry of Magic definitely makes up for any flaws.

5. Harry Potter and the Chamber of Secrets

If we were to pair any two films in the Harry Potter series based on how similar they are, it would be Sorcerer’s Stone and Chamber of Secrets. But that’s because they’re both directed by Chris Columbus, the genius behind the first two Home Alone movies. As such, it’s fair to say that they’re the ‘Fred and George’ of the Harry Potter series!

Chamber of Secrets is a solid follow-up to the first movie, but Harry’s second year at Hogwarts isn’t any easier (it’s all downhill from here, Harry!). While we’ve put it one place lower than Sorcerer’s Stone, its third act is far more engaging and a lot creepier. Giant spiders and giant snakes – what more could you not want?!

4. Harry Potter and the Sorcerer’s Stone

We think Sorcerer’s Stone made it that extra place because it’s the one that introduces us to the Wizarding World for the very first time. And maybe we’re already in the holiday spirit because this is most definitely a Christmas movie (if Die Hard can be considered such a film, then so can a Harry Potter movie!).

3. Harry Potter and the Prisoner of Azkaban

Every film franchise has its ‘definitive’ entry, and in the case of Harry Potter, we think it’s Prisoner of Azkaban, a film that truly captures the essence of all things Hogwarts and the Wizarding World. And the fact that it spends just as much time outside the school, in places such as Hogsmeade and on the Knight Bus, really lends to the magical scope of this film.

But its strongest point is the story – there’s an escaped murderer on the loose, wicked Dementors on the hunt, a mystery werewolf on school grounds, and even a spot of time travel along the way! Wild, wacky, whimsical, and at times plain weird, Prisoner of Azkaban is easily the most magical entry of them all.

We’ve finally arrived at the end of the series! While Deathly Hallows Part 1 isn’t quite the end, it is based on the first half of the final book. And it’s no surprise that the book was split into two movies, as there’s quite a lot to get through, and a lot of Horcruxes to collect along the way (which is actually pretty daunting!).

The penultimate chapter in the series is definitely a stand-out entry. No longer are we safe within the walls of Hogwarts, as Harry, Ron and Hermione skip their final year to try and take down Voldemort by tracking down various parts of his soul. With plenty of ‘indie drama’ vibes throughout, this is easily the grittiest of the bunch.

Fans are usually quite nervous before the final entry in a major franchise, as there’s always the possibility of feeling unsatisfied afterward, whether it’s because loose ends are left open or simply because the film is no good. But Deathly Hallows Part 2 is everything we could have hoped for and more.

The epic conclusion to the Harry Potter series is an action-packed, emotional roller coaster. Expect major revelations, tragic moments, and epic showdowns, as Harry finally faces Lord Voldemort with the whole of Hogwarts behind him (except Slytherin, of course). Finales really don’t get better than this.

How would you rank the Harry Potter movies?