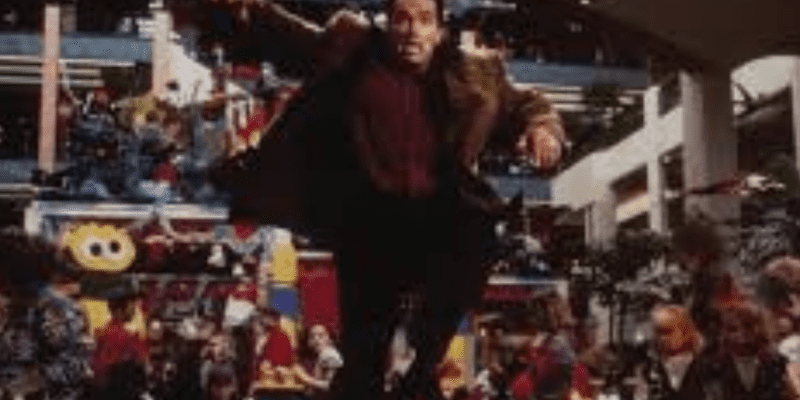 As the holiday season is right around the corner, Disney+ is not holding back on releasing holiday titles to their library.

Although, some viewers may believe that we should enjoy some stuffed turkey and cranberry sauce before thinking about stringing up the lights and heading to Christmastime events — like Merriest Nites! — there really is no bad time to add a little holly jolly to your day.

The newest announcement to come from Disney+ regarding releases of holiday themed titles is for the movie Jingle All the Way (1996) starring Arnold Schwarzenegger who plays a dad on a tireless mission to get his son the most popular toy on every child’s list. The movie will be available on Disney+ on November 5, 2021.

The Terminator (1985) star is joined by other members of the cast such as Sinbad, Phil Hartman, Rita Wilson, Jim Belushi, Robert Conrad, and Jake Lloyd to name a few.

The official description for Jingle All the Way (1996) by 20th Century Fox reads:

After promising his young son that Santa will get him the number one item on the boy’s wish list, a well-meaning workaholic father’s Christmas Eve turns into a hilariously nightmarish, madcap scramble across the city to find the much sought-after and therefore virtually impossible-to-find toy.

Disney+ seems to be adding more and more very merry titles (including Disney films and Fox films, now that Disney acquired Fox) just in time for the holiday season. There are many Disney movies and specials that help bring the jolly season to life and have become family traditions to watch all together.

What are your favorite holiday titles on Disney+? Let us know in the comments!

Comments Off on ‘Jingle All The Way’: Fan-Favorite Christmas Film to Be Added to Disney+