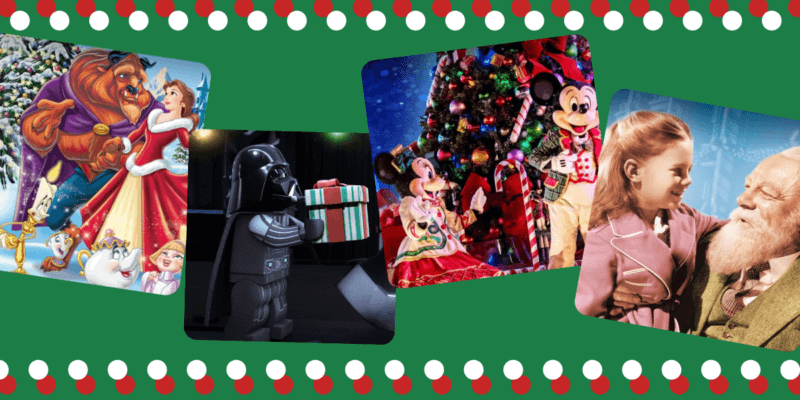 We have finally made it to December and that means that we’re down to crunch time when it comes to binging our favorite holiday programming! I don’t know about you, but I started checking movies off of my personal holiday watch-list, way back at the beginning of November. The Inside the Magic team wanted to do a full round-up of seasonal favorites in a Disney holiday watch list! This includes television shows, brand new specials, shorts, and of course — feature-length holiday films all available on Disney+. Below is a lengthy watch-list for you and your family to get started on today! Keep in mind, these are not all of the holiday movies and shows available on Disney+, however, they are some of the more popular ones that we think you won’t want to miss.

If you don’t have a long time to sit and watch a film, these Disney Christmas shorts are the perfect thing for you. They’ll give you a quick dose of holiday magic that will really get you into the spirit of the season!

“Join Mickey and his pals for tales of their most memorable Christmases.”

Mickey’s Twice Upon a Christmas

“Mickey and his pals learn the true meaning of Christmas…with Santa’s help!”

“Pluto and Mickey bring him a special Christmas Tree.”

“An elite elf unit ensures homes around the world are prepared for Santa.”

“Olaf and Sven set out to save Christmas for Anna and Elsa.”

“All your Disney pals star in this retelling of a Dickens Christmas Classic.”

Once Upon a Snowman

“This new shirt film follows Olaf’s first steps as he comes to life and searches for his identity.”

Some new, some old — but all of these festive television specials will bring the magic of the Holiday season from each Disney Park right to your living room. Whether you’re joyfully singing along to some of our favorite Disney hits, or watching the Magic Kingdom get decorated in a spectacle of shining lights — you won’t want to miss these magic Christmas specials.

“Spread the holiday Cher with this magical celebration featuring a look back on past performances.”

This holiday movie list is a combination of some classic seasonal films like The Santa Claus — featuring Tim Allen, as well as some newer Christmas movies like the Disney+ Original film, Noelle!

“Kris Kringle’s daughter must find her brother and bring him back in time to save Christmas.”

“A bizzarre twist of fate transforms a divorced single dad into the new Santa.”

“Scott Calvin must get married by Christmas Eve Orr sloe his title as Santa.”

“The holidays take a chaotic turn when Jack Frost puts a freeze on Christmas.”

“When Kevin is home while his family goes on a Christmas trip, he must defend his home from burglars.”

“Kevin is home alone in NYC but won’t be for long since the Wet Bandits are also in the Big Apple.”

“Anna and Kristoff brave the elements, racing to save Elsa and the kingdom.”

“The Muppets present their own touching rendition of Charles Dickens’ classic tale.”

Beauty and the Beast: The Enchanted Christmas

I’ll be Home for Christmas

“A jokester zooms home food Christmas with a prize in mind — his dad’s car!”

Be sure to subscribe to the Disney+ streaming service now if you aren’t already so that you can easily access all of these fabulous holiday favorites.

Which holiday watch on our list is your favorite this year? Comment below and let us know!

Comments Off on The Ultimate Disney+ Holiday Watch-List