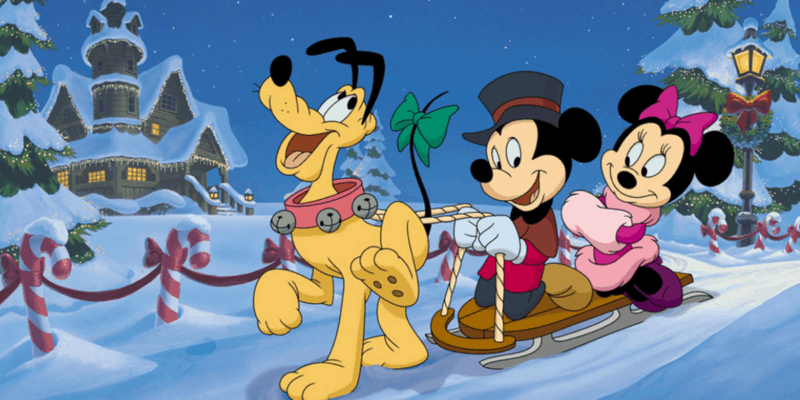 Disney has announced some Fall and Winter premiere dates for new content set to appear on Disney Channel and Disney Junior. Among the exciting projects revealed were two original Mickey Mouse holiday movies that will debut this year — one for Halloween and one for the Christmas Holiday season.

At the Television Critics Association summer press event, Disney Branded Television rolled out its slate for the upcoming fall and winter 2021 holiday seasons. Their schedule announced two new Mickey Mouse movies. Get ready for all your favorite Mickey Mouse Clubhouse pals to celebrate Halloween and Christmas as only Mickey, Minnie, Donald, Goofy, Daisy, and Pluto can!

The not-so-spooky Halloween movie, Mickey’s Tale of Two Witches, will premiere on October 7, 2021, and the holiday season-inspired Mickey and Minnie Wish Upon a Christmas will bow on December 2 — both from Disney Television Animation.

Mickey’s Tale of Two Witches—Thursday, October 7, on Disney Junior
On Halloween, Mickey tells Pluto a story about two witches-in-training, Minnie the Wonderful and Daisy Doozy, who must pass four tests to graduate from the Witch Academy in Happy Haunt Hills. While Daisy isn’t confident about passing, she and Minnie join forces, along with Count Mickula and the gang, to defeat a mischievous ghost. Minnie and Daisy learn that working together makes their magic and their friendship stronger. Rob LaDuca and Mark Seidenberg are executive producers.

Mickey and Minnie Wish Upon a Christmas—Thursday, December 2, on Disney Junior
After a series of mishaps, Mickey, Minnie and the gang are separated all over the world and must try to get back to Hot Dog Hills by Christmas Eve. A mysterious and jolly stranger shows up to tell them about The Wishing Star, which could be the secret to bringing everybody home in time to celebrate together. LaDuca and Seidenberg are executive producers.

The announcement of the Mickey Mouse holiday movies did not include any information on when Disney+ subscribers can expect the original movies to become available for streaming. Though, it’s expected that the films will be added to Disney+ shortly after their respective Disney Junior premiere dates to ensure it fits into the window of each holiday timeframe.

Related: Is $249 Too Much For a Disney Christmas Event? Fans Speak Out

Currently on Disney+, you can find Mickey’s Once Upon a Christmas (1999), it’s follow up, Mickey’s Twice Upon a Christmas (2004), and the classic animated special Mickey’s Christmas Carol (1983). Also, the twentieth episode of Mickey Mouse Clubhouse Season 1 is titled “Mickey Saves Santa” and follows Mickey and his pals as they save Santa’s sleigh from being stuck on Mistletoe Mountain.

Related: Boo Bash Attendees Speak Out on If Disney After Hours Event Is Worth It

Mickey’s Monster Musical is available to stream on Disney+ as a two-part episode of Season 5 of Mickey Mouse Clubhouse — episodes 7 and 8.

Notably, neither Disney Channel Christmas and Halloween classics, Mickey’s Magical Christmas: Snowed in at the House of Mouse or Mickey’s House of Villains are currently available on Disney+.

Is it too early to start thinking about Halloween movies and shows? How about Christmas movies? Let us know in the comments!