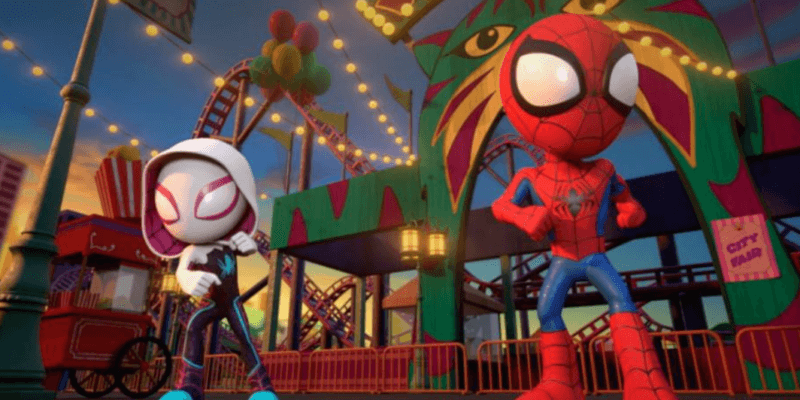 Are your spidey senses tingling? That’s probably because Disney Junior just announced a brand new animated series with Spidey and his friends!

During the Marvel Animation & Family Entertainment panel at the 2019 D23 Expo, Disney Junior informed fans that Spidey, Miles Morales, and Ghost-Spider will team up with Hulk, Black Panther, and other super-hero friends in Marvel’s “Spidey and His Amazing Friends.”

The new animated series will be geared toward preschoolers and their families as Spidey and his friends will have to overcome obstacles and fight off the villains in order to save their neighborhood.

Everyone’s favorite web-master has gotten used to working alone, but that will soon change now that Peter Parker must realize what it takes to become a true super hero. Parker will team up with his friends Miles Morales and Gwen (Ghost-Spider) along with iconic heros such as Hulk, Ms. Marvel, and Black Panther in order to defeat evil-doers, soon realizing that teamwork is the best way to save the neighborhood (and the day, of course).

“Everyone at Marvel is thrilled to launch our first preschool series on Disney Junior, the gold standard platform for the audience. We believe parents and kids will be excited about these stories filled with themes of friendship, cooperation, solving problems, and using your abilities to help others,” Lane continued.

Also speaking out during the panel was Joe D’Ambrosia, senior vice president, Original Programming and General Manager, Disney Junior. “We’re thrilled to be working with Marvel on this new series showcasing the exciting adventures of Spidey and his friends as they model the importance of teamwork and helping others in their community. This is the perfect series to introduce preschoolers to the super hero powers of friendship and working together to help others in need,” D’Ambrosia stated.

Despite all of the Sony and Marvel drama recently, this didn’t stop Disney Junior from bringing spidey joy to preschoolers from all over (and their families, of course).

Marvel’s “Spidey and His Amazing Friends” will be the first full-length Marvel series for the Disney Junior audience and is set to debut in 2021.

Are you looking forward to watching the first full-length Marvel series on Disney Junior?