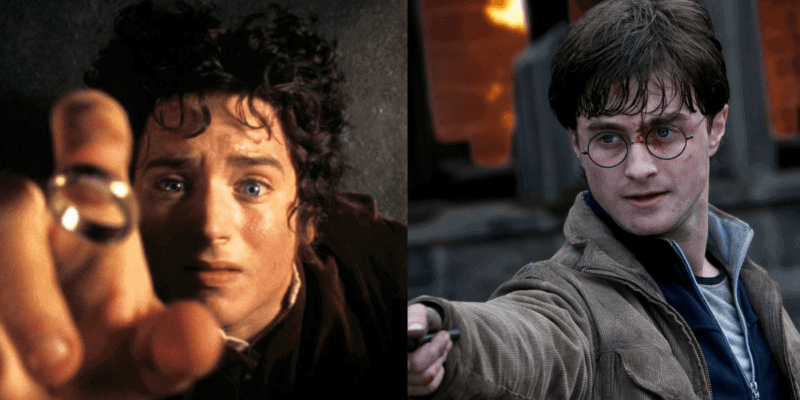 Two of the most beloved franchises in history, Harry Potter and The Lord of the Rings, feature some of the most respected novels and films in pop culture history. Each boasting a loyal fan base, those who know every aspect of their respective fantasy worlds have noticed some similarities between the two epic stories.

Did J.K. Rowling cut it too close to Tolkien’s Lord of the Rings, or just coincidence?

The quick answer: no, author J.K. Rowling definitely did not copy The Lord of the Rings. The separate works pull from European and Norse mythology, and therefore can sometimes overlap in their story. However, there are many character types in author J.R.R. Tolkien’s The Lord of the Rings that Rowling used in her Harry Potter series.

Tolkien’s The Hobbit came to bookstores worldwide in 1937, a good 60 years before Rowling’s Harry Potter and the Sorcerer’s Stone novel was released. Both are literally powerhouses that forever changed fantasy storytelling, but Tolkien fans and Rowling fans have noticed that the two can share some major storylines.

One big similarity is the story elements, especially the “chosen one” idea. Harry Potter and Frodo Baggins are both chosen against their will to take on a nearly impossible task with the help of a band of heroes and save their respective worlds. Both are male and were orphaned at a young age (Frodo lost his parents at age 12, while Harry was only an infant when his parents passed). The two live with their uncles, and they have to battle a mostly faceless evil force referred to as the Dark Lord.

But,  the “chosen one” storyline is a tale as old as time and is featured in everything from Star Wars to The Lego Movie (2014).

Another similarity that fans noticed is the arch-angle-type roles of Gandalf the Grey and Hogwarts Headmaster Albus Dumbledore. For years, the two have been constantly referred to as the other since both sport long, greybeards in their old age. Both are incredibly wise, sound the same, and look the same.

But, to say that Rowling ripped of Gandalf would be going way too far, as production studios like New Line Cinema for LOTR and Warner Bros for Harry Potter for the live-action adaptations for both most likely influenced this commonality.

Funny enough, Gandalf and Dumbledore are both there for their protagonist when their respective stories take off. Birthdays mark the beginning of their long journeys. For Harry, it’s his 11th birthday, while for Frodo, it’s the 111th birthday of Bilbo Baggins.

One of the biggest similarities between the stories of Hermoine Granger, Ron Weasley, and Legolas is the sidious villains Wormtounge and Wormtail. Do you know which Worm character belongs to the right franchise?

Both Wormtounge and Wormtail serve their Dark Lords. Both are boggarts, households spirits in Celtic mythology that haunt but are sometimes helpful. Wormtounge is the second-hand man to Saruman, while Wormtail serves dark lord Voldemort.

The Worms go by nicknames, as their respective names are Peter Pettigrew (Harry Potter) and Gríma (Lord of the Rings). The two characters serve the same purpose: frantically manipulating powerful leaders while inspiring injustice and division in families or communities. Both are also caught red-handed in their evil plans and eventually exiled until being reunited with their masters.

Interestingly enough, Wormtounge goes onto betray Saruman in both The Lord of the Rings novel and film adaptations, but Wormtail is loyal to Voldemort.

Gamerant points out an important connection between Harry Potter and The Lord of the Rings:

In The Lord of the Rings, the Dark Lord’s life force is bound to the One Ring. In Harry Potter, the Dark Lord’s life force is bound to seven Horcruxes. Both heroes must destroy the objects so that the Dark Lords cannot regain full power. If Frodo puts on the ring, he will become invisible to everyone else. This is similar to Harry’s invisibility cloak. Frodo normally keeps the ring on a necklace around his neck for safekeeping, but always carrying it has put a burden on him since the Dark Lord is draining his will and energy. This is similar to the Slytherin locket Horcrux that Ron wears around his neck until it can be destroyed. Both Ron and Frodo experience a change in personality due to the objects they carry.

Unlike nearly losing his life to destroying the One Ring of dark lord Sauron in Mount Doom in Mordor with the aid of Samwise Gamgee, Harry temporarily loses his life to Voldemort — as he’s the last Horcrux — but later comes back to life from the Ressurection Stone. These are two pretty big similarities, but probably not plagiarism or anything of the sort.

In both works, the audience is introduced to a small, frail creature they’re supposed to show sympathy for. In The Lord of the Rings, readers meet Gollum. In Harry Potter, Dobby serves as the loyal yet tortured servant of the Malfoy’s and later Harry Potter (though he isn’t a slave to Harry, but rather a guardian).

In the end, both Gollum and Dobby propel the stories to new heights. Gollum literally destroys the One Ring after falling into Mount Doom with his Precious. At the same time, Dobby breakout Harry, Hermoine, Ron, and Luna Lovegood in The Deathly Hallows Part I (2010) and inspires Harry to continue on his mission.

In the Rings trilogy, Tolkien uses the Nazgûl to search Middle Earth for Frodo and the One Ring, while Rowling features incredibly similar characters but calls them Dementors. Both evil creatures are cloaked in black, don’t talk, and are neither living nor dead.

And there is a big giant spider in both stories. In the first entry in both franchises, the main characters fight a large troll.

In both stories, there is an object that allows the protagonist to see a possible future or a desire. In LOTR, Galadriel shows Frodo a mirror (which is actually just a basin of water) that shows him the future, present, or past. In Harry Potter, there are two different objects used. The first is the Mirror of Erised which allows Harry to see his biggest desire (or possible future) and the second is the Pensieve, which shows memories (or the past).

In the end, you can’t truly suggest that J.K. Rowling stole from The Lord of the Rings. For that matter, you can’t suggest she even copied Tolkien’s work, as no new art is original. While there is some similarity between the two franchises, there are enough differences that allow them to stand on their own.

Every movie and book we read is somehow connected to some previous work, which is also connected to some older tale. Fairy tales and fantasy tropes aren’t copyrighted, and anyone can tell the tale of wizards or trolls in a new and exciting way that doesn’t necessarily copy from a pre-existing work.

All in all, both series will forever inspire new readers and writers to tell their own fantastical stories.

Do you think Harry Potter and The Lord of the Rings are too similar? Let us know in the comments below!