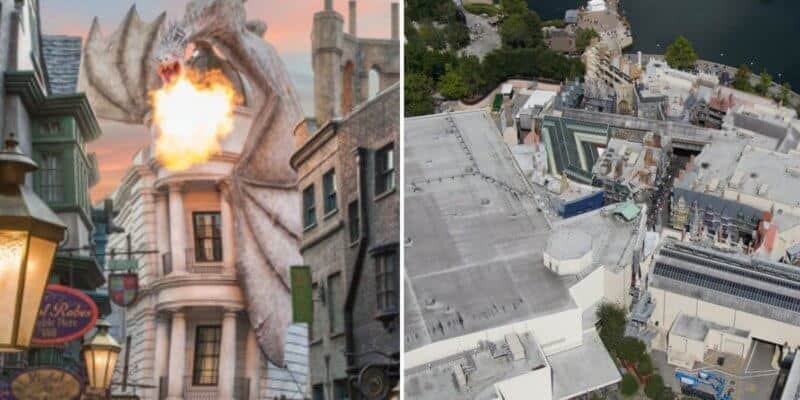 When Guests visit the Universal Orlando Resort, one of the first lands to hit up, for many, is the Wizarding World of Harry Potter.

At both Islands of Adventure and Universal Studios Florida, Guests can enter a different part of the Harry Potter franchise and fall deep into the immersion that it encompasses. At Universal Studios, Guests can enter Diagon Alley! When you enter Diagon Alley, the space around you may seem quite tight, just as it was once described in J.K. Rowling’s books.

However, when looking from above, it is quite incredible how much of the space used was for buildings compared to walkways for Guests! Photographer Bioreconstruct (@bioreconstruct) took a fantastic aerial shot of the land, which seems to solely be buildings! If you look at the top half of the photo, you can see a small black strip, which is Diagon Alley.

Aerial photo showing the complex use of space in Wizarding World of Harry Potter – Diagon Alley.

One of the most shocking things about this visual is how Guests walking into the land would never know how much bigger it actually is! Although the buildings loom over you, and there is so much to explore, the theming is so impeccable that Guests would never think that what they are looking at is a facade.

When you enter Gringotts bank to ride Harry Potter and the Escape from Gringotts, you assume you are walking into the bank itself. Looking at this photo, we can see that the bank is a lot larger than it appears when entering Diagon Alley. This is something we see on many attractions with a stunning facade and expansive attraction, such as Disney World’s The Haunted Mansion at Magic Kingdom.

Considering how much of Universal Studios had to be removed to make room for the Diagon Alley expansion, this photo shows how the area was allocated with a much better visual representation of the land than one could achieve on foot while walking through it.

Did you expect so much of Diagon Alley to be show buildings? Are you a fan of the Wizarding World of Harry Potter?