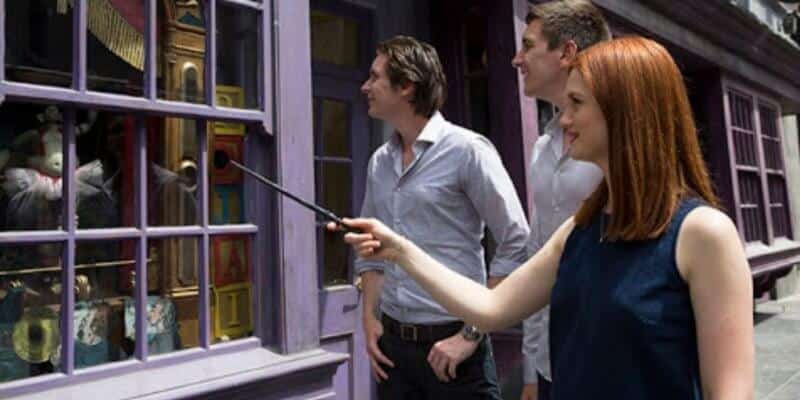 One of the best parts about the incredibly immersive land is are the wands. But what are they, and what do they do? Today, we break down everything you need to know about the interactive wands at the Wizarding World of Harry Potter.

The interactive wands are a great and fun feature for any wizard or witch to us to interact with the decoration around The Wizarding World of Harry Potter portion inside the Universal theme parks.

Throughout the Harry Potter-themed section of the park, you will find gold medallions on the floor with a spell, and if you have an interactive wand, you will be able to cast the spell and see things move or change.

Where can you buy your wand?

The interactive wands are sold in four different locations inside The Wizarding World of Harry Potter between Diagon Alley and Hogsmeade at Universal Studios Florida and Universal’s Islands of Adventure.

Remember that Universal Studios Hollywood, and Universal Studios Japan as well. Wands are available at those parks as well. Today, we are focusing on Universal Orlando Resort, but each Hogsmeade is almost identical so you can take this information to each Wizarding World of Harry Potter you visit!

At Diagon Alley, wizards can purchase their wands at Ollivanders Wand Shop or at Wands by Gregorovitch.

If you get on the Hogwarts Express to Hogsmeade, you can also buy your wand at Ollivanders or at the wand cart located on the path to the Hogwarts castle.

All the locations sell the same wands, the collectible wands (non-interactive), and the interactive wands.

How much do the interactive wands cost?

If you walk into any wand shop the interactive wand costs $55.00 each. You can also order the wands online and pick them up at the theme park so you can start doing magic right away.

What is the ‘Wand Selection Ceremony’?

Just like in the Harry Potter movies and books, you can go through the experienced of having your wand choose you! When you visit Ollivanders at Hogsmeade or at Diagon Alley, you can watch the wand keeper select one of two people from your party to have the wands choose them.

This is an interactive attraction that is made to simulate the experience that Harry Potter has when he goes to buy his wand at Ollivanders for the first time. Besides being a nice attraction for any Harry Potter fan, the wand selection ceremony experience is also free!

And if you, or someone in your party, is chosen to go through the wand choosing ceremony, there is no obligation for you to purchase your wand at the end.

Related: A Guide to the Magical Creatures in ‘Harry Potter’

Where can you cast spells?

If you already have an interactive wand, you are more than ready to start casting spells around the theme park!

In total there are 16 spells you can cast around Diagon Alley, and 9 at Hogsmeade.

Inside the case of each wand, there is a double-sided map that shows where you will be able to cast each spell. At each spell location, the witch or wizard will find a gold medallion on the floor which shows where to stand as well as the correct wand movement to cast the spell.

After you find the spell spot and know which of the Harry Potter spells to cast, you just need to make the correct wand movement and wait to see what happens.

Here is a breakdown of the spells and in front of which stores you are able to cats them:

Which wand characters are there?

In total, between interactive and replica wands that are non-interactive, there are 68 wands you can choose to purchase at the Universal Orlando Resort theme parks.

These are the Harry Potter character interactive wands you can choose from:

Besides the character’s wands, there are also interactive wands at Ollivander that are not based on the characters but made of different wood types such as birch, hazel, holly, ivy, oak, vine, etc. So you have many choices when it comes to finding the perfect wand, just remember the wand chooses the wizard!

If you do not want an interactive wand, each wand does come in a non-interactive version. These wands come at a lesser price point and can be purchased at the same places you can buy the interactive wands.

Have you ever cast spells at the Universal parks? Would you buy a Harry Potter interactive wand at The Wizarding World of Harry Potter? Let us know in the comments below.