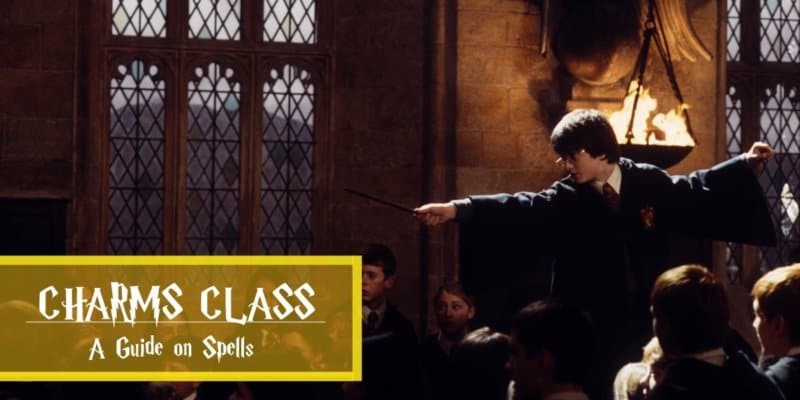 Welcome to your introduction to Harry Potter Charms class young wizards and witches! Even muggles are allowed to learn here! Based on information gathered from the Harry Potter and Wizarding World universe, you will start to learn the basics about the different types of spells and what they are used for.

Healing spells have their own area within spells because they have a unique capacity, to magically improve the physical condition of the living subject. Healing spells have categories such as charms, vanishments and conjurations.

A healing spell is not to be confused with a Mending Charm, which is used to fix inanimate objects. Using a mending charm on a human could cause serious scars.

This type of spell focuses on altering the form or appearance of an object by alternating the object’s molecular structure. Transfiguration are considered very hard spells requiring some scientific knowledge.

When casting a transfiguration spell, the wizard has to keep in mind the following things as described by the theoretical mathematical formula though to students during their fist year at Hogwarts:

It is easier for a wizard to try to transfigure a small object, rather than a huge one. This is true even for the most experienced transfiguration experts like Professor McGonagall.

Transfiguration may look very fun and a promising field of study, but there are five limitations to transfiguration spells. However, there is only one specifically mentioned in one of the Harry Potter books, Harry Potter and the Deathly Hallows: one can not conjure food. But already exhausting food can be summoned from one place to another. This happens during the Hogwarts banquet when the food magically appears at the tables.

Transfiguration is divided into four categories:

Under transformation, it is also important to notice that wizards can transfigure into animals in two different ways: Human Transfiguration and Animagus.

Human Transfiguration is when you turn a human body part, or an entire human, into an animal. This can be used anywhere from changing hair color to turning yourself or others into an animal. An example of this is when Hagrid tries to turn Dudley Dursley into a pig but ends up only giving him a pig’s tail during the first Harry Potter book. Viktor Krum also transfigures his head into a shark’s head during the second task of the Triwizard Tournament to save Hermione.

On the other hand, Animagus is very different. An Animagus is a wizard or witch that can transform themselves into an animal and back again at will. A wizard can learn to turn into an Animagus, however, a wizard does not choose their Animagus animal form, they will turn into the animal that best suits them.

In the Wizarding World, there is also an Animagus Registry that exists to keep track of those wizards that can transform this way into animals. Two very notorious examples of Animagus in the Harry Potter movies and book series are Professor Minerva McGonagall, that turns into a cat, and Sirius Black, that turns into a bear-sized black dog.

As you can see transfiguration is a very complex set of spells that require a lot of study.

Charms are also known as enchantments, a charm is a type of spell that adds a property to an object or individual. It alters what an object does. An example of a charm would be the levitation charm Wingardium Leviosa. A charm can be cast for the moment it is needed, or it can be a lasting charm. An object that has a lasting charm is called a bewitched item.

Charms are some of the most powerful spells. In order for a wizard or witch to cast a charm, they need concentration, very accurate wand movements, and proper pronunciation of the spell. If the charm is poorly cast, it can backfire on the wizard that cast it.

Within the charms spell field, there are charms that can cause pain or discomfort to those that are hit by the enchantment. These types of charms are called ‘Dark Charms’, and the category is composed of curses, jinxes, and hexes.

A jinx is a minor type of Dark Magic and the least severe of the three dark charms. The effects of a jinx are irritating to the person it affects. An example of a jinx that is very useful during a duel the knock-back jinx Flipendo.

In order to successfully cast a jinx, the wizard casting the spell must keep eye contact with the target at all times.

Jinxes can be blocked or removed by a counter-jinx or a counter-curse, or prevented by an anti-jinx spell. If hit or affected by a jinx, the wizard usually ends up needing to visit a magical hospital, or needs to see a healer with expertise in dark magic.

Like jinx, a hex is a type of dark charm. However, it is worse than a jinx but not as bad as a curse. A hex causes moderate suffering to its victim.

In the Harry Potter books, Draco Malfoy and Harry are dueling when Draco casts the Densaugeo incantation, but he misses Harry. Instead, the hex hits Hermione Granger and Gregory Goyle. This hex makes your teeth elongate at an alarming rate and painfully.

“It wasn’t a pretty sight. Hermione’s front teeth — already larger than average — were now growing at an alarming rate; she was looking more and more like a beaver as they elongated, past her bottom lip, towards her chin — panic-stricken, she felt them, and let out a terrified cry.” – Harry Potter and the Goblet of Fire

Hexes can be defended against by using a hex-deflection, and it can be countered with a hex-breaker or a hex zapper.

A curse is the worts of the three dark charms. Curses can vary in intensity and forms, they are usually the most wicked, strongest, long-lasting, and least reversible of the dark charms. They are cast to cause immense suffering to the victim.

There is an array of curses, but the most famous ones in the Wizarding World are the Unforgivable Curses:

Avada Kadavra – Is the killing curse. When this curse is cast on a living being, this unforgivable curse causes instantaneous and painless death with no violence or trace injury to the body.

Crucio – Also known as the torture curse, the curse inflicts intense and excruciating pain on the victim.

Imperio – The imperium curse places the victim completely under the caster’s control.

The unforgivable curses are widely used by Lord Voldemort and his Death Eaters.

The use of an unforgivable curse on a human will grant the wizard a one-way ticket to a life sentence in Azkaban. These three curses are not the only curses known by witch-kind, but they are the only three ones that there are no deflection or counter-curse for. However, a witch or wizard can try to resist the Imperius Curse, but it is extremely hard, and basically impossible, to do so.

Curses can be scary and you would assume that only a dark wizard would use them, yet that is not true! For example, Hermione uses the Petrificus Totalus (the full body-bind curse) on Neville Longbottom during Harry Potter and the Philosopher’s Stone. She has to petrify Neville when he tries to stop the Gryffindor trio from sneaking out of the house common room to prevent the theft of the Sorcerer Stone.

The curse lacerates the target and causes severe hemorrhaging. Even though, Harry did cast the spell out of curiosity after he read about the spell in the Half-Blood Prince’s old book. So, technically, he did not mean to cause Draco that much damage and pain.

According to a Pottermore article, the list of the worst curses in descending order is as follows:

Last, but not least, counter-spells! As the name suggests, these are a series of spells aimed to inhibit, remove or negate the effects of another spell.

Some of the most famous counter-spells shown in the Harry Potter series are Finite Incantatem, which is a general counter-spell that terminates spell effects in general, Nox is the counter-charm for Lumos, Alohomora that counters Colloportus.

An example of a counterspell being used in the movies, and books, is when Snape tries to counter-spell Professor Quirrell’s jinx on Harry’s broom during his first Quidditch game at Hogwarts.

As you can see, spells are a complex thing to learn, but it probably the most essential part in the wizarding universe.

Did you know that things learned during Charms class at Hogwarts so complicated? Which charm is your favorite, and why? Let us know in the comments below.