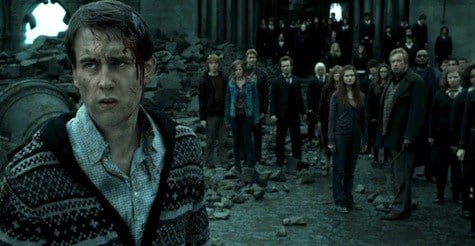 Neville Longbottom actor Matthew Lewis has spoken about his discomfort watching the Harry Potter films today. This information comes from The Express but was first cited in a New York Times interview.

The actor said he finds it difficult to watch his earlier work in the JK Rowling movies for a very personal reason.

Who is Neville actor Matthew Lewis?

Though he has comparatively little screentime in the movies, Lewis plays the key character of Neville Longbottom. The Gryffindor is there from Philosopher’s Stone/ Sorcerer’s Stone to Deathly Hallows Part Two. His role ranges from sticking up to Hermione (Watson) in Philosopher’s Stone, helping Harry in one of his trials during The Goblet of Fire, to eventually destroying Voldemort’s Horcrux / pet snake, Nagini using the sword of Gryffindor. He also maintained a bitter rivalry with Bellatrix Lestrange after she tortured his family.

The actor is also famous with Harry Potter fans for having a dramatic physical transformation throughout the films, and without the use of a polyjuice potion!

He’s undoubtedly a fan favorite, but why does he no longer enjoy watching the films that made him famous?

Related: How Much Are Your ‘Harry Potter’ Books Worth?

What did Lewis say about the Harry Potter movies?

It’s been nearly ten years since the release of Deathly Hallows Part Two when Lewis hung up his cloak and wand. Since then the actor has found the Wizarding World movies difficult to watch when he’s on-screen.

Speaking with The New York Times, he said:

“I find it quite difficult when too much of me starts to come through in a character. It’s easier when I can play someone completely different, like a police officer in London or someone who’s wealthy […] At times it’s painful how much of me there is in Neville. When I’m watching, I’m like, ‘That’s not Neville; that’s you.”

So there you have it. Like many of us, Lewis dislikes seeing himself on screen for personal reasons. Hopefully, he’ll be able to overcome this difficulty in the future and see his performance in the same way that the fans do. The Neville Longbottom actor is a fan favorite for a reason, and his performance is anything but painful.