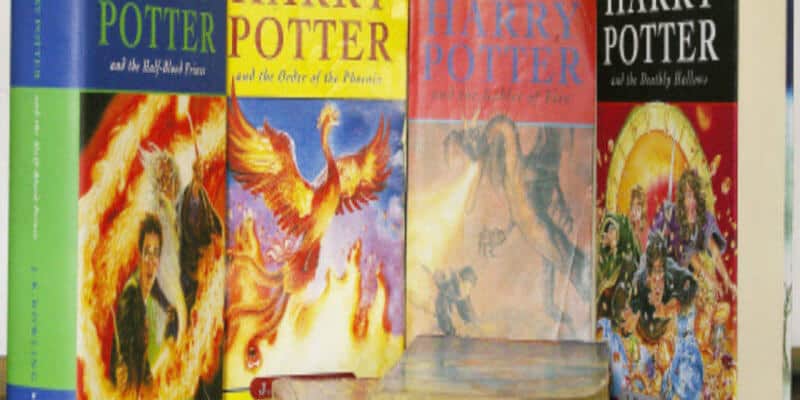 Imagine sorting through a junk shop and finding an old copy of Philosopher’s Stone. You check it out and realize you’ve got a first edition Harry Potter book in your hands. It has happened to some, but it’s about as realistic as getting your Hogwarts letter for many. But what is your Harry Potter book’s value, anyway?

Can these books actually net you thousands of dollars? And how do you work out if your copy is worth anything?

Read on and we will explain. This article’s information and pictures come from Peter Harrington, a rare book store in London, and Abe Books, an online specialist book valuer.

As with any kind of collection, the better condition the more valuable it is. Signed pristine copies of Harry Potter and the Philosopher’s Stone are obviously going to sell for much higher than cheaper copies. Certain books in the series may also have limited editions that make them more valuable, sometimes referred to as “deluxe editions”.

Additionally, you’re looking for a hardback version. Every Harry Potter fan knows that the books were released in both paperback and hardback, but it’s generally the hardbacks that rack up the big muggle bucks. Finally, it’s all about finding a first edition copy. The first print run of any series will be inherently more valuable than later editions.

So, if your old Harry Potter book is the first edition, in good condition, is a hardback, and even better, signed by JK Rowling — you’re off to a magical start.

How much is my copy of Harry Potter and The Philosopher’s Stone worth?

As you can imagine, the first book is the big one. First edition copies of this title are the holy grail of Harry Potter books and in turn, there are very few out there. According to AbeBooks, only 500 copies of the original 1997 hardback edition were published. Of those, the publishers sent 300 to libraries.

Prices tend to range between $40,000 – 55,000, though we recently reported that one of these first editions sold for a whopping $84,000 at an auction house. The higher end of sales will come from a hardback copy in excellent condition. As with all books in the series, having Rowling’s autograph will greatly increase their value. For the US version of Harry Potter and the Sorcerer’s Stone, you’re unfortunately looking at a lot less cash. However, these can still fetch up to $6,500 (particularly if signed by the author) — which would certainly fill out the Gringotts vault quite nicely.

It can be daunting to try and work out whether or not you have a first edition on your hands. However, for the fabled hardback first edition of Harry Potter and the Philosopher’s Stone, your book will need to meet the following criteria:

4. On page 53, there will be a typo. When looking at Harry’s school supplies list, “1 wand” will be accidentally printed twice, like so;

If your book features all of the above, your copy of The Philosopher’s Stone is a first edition and is worth more than a few shillings.

Your Harry Potter book’s value will only increase if you manage to bag a signed copy too. As JK Rowling was still somewhat unknown at this time, she did a lot of press for the book and thus a lot of signings, so getting hold of one is somewhat realistic. Though it’s kind of crazy to imagine a time where the series wasn’t a worldwide sensation!

How much is my copy of Harry Potter and The Chamber of Secrets worth?

You might think that The Philosopher’s Stone’s smash success meant that copies of The Chamber of Secrets aren’t valuable. Well, while they aren’t as pricey as the latter, hard copy first editions can still fetch up to $9,000. Additionally, the deluxe edition can also be worth thousands if signed.

As mentioned, Rowling and the series hadn’t quite hit international fame at this point, so your odds of securing a signed copy are still pretty good.

Finding out whether your copy of book two is a first edition is much the same as with book one. You’re looking for Bloomsbury as the publisher and 1998 as the date, without any later date.

Additionally, the print line should once again read 10 9 8 7 6 5 4 3 2 1. However, this time there are no typos to signify a first edition. Your Harry Potter book’s value is higher than the top goal on a Quidditch pitch if it has all of these features.

How much is my copy of Harry Potter and The Prisoner of Azkaban worth?

Interestingly, first editions of the “early version” of Prisoner of Azkaban can be worth up to $12,000. This is due to a printing change on the copyright page; the original run was credited to “Joanne Rowling” but stopped mid-print to be amended to “JK Rowling”. These “Joanne versions” are the most valuable as there are very few out there. Any later printing of Prisoner of Azkaban is unlikely to be so valuable, though the deluxe edition has been known to fetch over $4,000 if they’re a first edition.

As with the copies of Chamber of Secrets and Philosopher’s Stone, you’ll want to see Bloomsbury as the publisher and the printing line of 10 9 8 7 6 5 4 3 2 1 on the copyright page. If it has these elements, your Harry Potter book’s value could be in five figures!

How much are the last four Harry Potter books worth?

Harry Potter and the Goblet of Fire

These titles aren’t worth as much as the first three. However, they can still be valuable with the right edition and especially if they’re signed. Limited edition copies of Goblet of Fire are relatively rare, but if you can pick up the Bloomsbury UK edition or Scholastic’s US edition, these could hold more value. They’re distinguishable by their unique illustrations, and they need to be signed by the illustrator to be worth thousands.

As for a regular copy of Goblet of Fire, you’re going to want Rowling’s signature for it to be worth anything (even if it’s a first edition). With this, the books can be worth over $10,000.

Order of the Pheonix, Half-Blood Prince, and Deathly Hallows

If you have a copy of Order of the Pheonix signed by Rowling at the initial launch event in Edinburgh, Scotland, you’re looking at a four-figure sum. Copies signed by the book’s illustrators may be valuable, but you’re probably looking in the hundreds rather than the thousands.

As for Half-Blood Prince, you’ll again need JK Rowling’s signature for the book to be worth anything. This book came out when the Harry Potter series was at peak popularity, so it’s difficult to find any collector’s items in the later books.

Unsurprisingly, it’s the same deal with Deathly Hallows. Without Rowling’s signature, it’s just another Harry Potter book. With it, your humble Harry Potter book’s value could be four-figures.

So that’s how to tell if your Harry Potter book is potentially worth more than a few galleons. Maybe you’ll find a valuable item hiding in the cupboard under the stairs! Best of luck, Potter fans.

Do you have a valuable Harry Potter book? Let us know in the comments below.