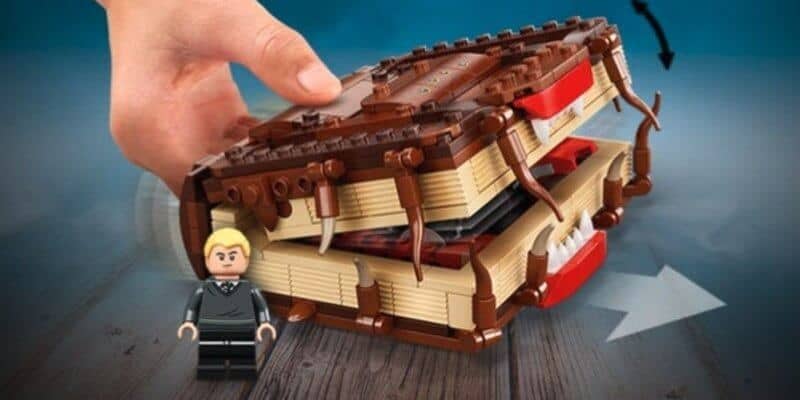 2021 has started on a great note for any LEGO Harry Potter fans! LEGO launched an exclusive promotion that states anyone who purchases any Harry Potter LEGO set over $75 in the month of January will receive an exclusive free Monsters Book of Monsters set.

The exclusive set comes with the Monsters Book of Monsters and a Draco Malfoy Minifigure. The book features a pull-back action that makes it scurry around and a snapping mouth. This fun feature certainly brings back some memories of the Harry Potter movies!

If you don’t quite remember where in the Harry Potter films series this magical item appears, don’t you worry, we will tell you. The ferocious Monster Book of Monsters appeared in Harry Potter and the Prisoner of Azkaban as required reading for those students taking Hagrid’s Care of Magical Creatures class at Hogwarts.

Like the title suggests, the book is a monster itself, and it attempts to bite off your fingers if you try to open it. According to Hagrid, the only way to open the book without losing some fingers is to stroke its spine.

It is no surprise that LEGO decided to launch this great campaign, since the extraordinary success of the massive 5,544-piece Harry Potter Diagon Alley set release at the end of last year.

If you are interested in taking advantage of the promotion, you can click here to check out all the LEGO Harry Potter sets.

What do you think of the exclusive Harry Potter LEGO set? Let us know in the comments below.