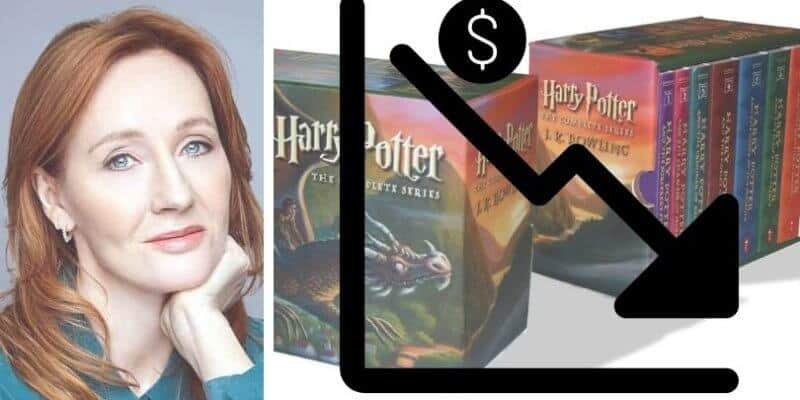 Back in June, Harry Potter series author J.K. Rowling was involved in a series of controversies with the LGBTQ+ community for Tweets that were considered to be transphobic.

However, this was not the first time J.K. Rowling was accused of supporting transphobic rhetoric on Twitter. In December of last year, the Harry Potter author received widespread criticism as she spoke out in support of Centre for Global Development researcher Maya Forstater who had bee fired due to her opinion that a person cannot change their biological sex.

And in May of this year, J.K. Rowling sparked more turmoil on Twitter after she liked she gave to a “anti-trans activist” on the platform.

This one got a Like from @jk_rowling today. After my thousand or so re-Likes of her tweet, seems fair. pic.twitter.com/OiZ1ww6YlZ

Now, the backlash of Rowling‘s comments are being seen outside social media. The Harry Potter print books sales has dropped in the United States. According to NPD BookScan figures, in June, sales in print books in fiction overall rose 31.4% compared to May. The growth was also noticed with fiction titles in the adult, young adult, and juvenile sectors. While fiction book sales are increasing, Rowling‘s books saw a print sales rise of only 10.9% in June.

This also affected other Harry Potter licensed titles not authored by Rowling. Those saw a total sales increase of only 7.7%.

Yet, the NPD BookScan numbers do not account for eBooks, audiobook sales or sales to libraries and direct publisher sales.

This is a considerable drop on the authors print book sales. In June 2019, J.K. Rowling‘s sales were higher than the rest of the industry: 35.2% rise on Rowling‘s books compared to 33.3% rise in fiction overall.

On an interview granted to Variety, analyst and executive director of business development at the NPD Group Kristen McLean supports the data.

It is safe to assume that the Harry Potter author‘s sudden drop in sales is somehow linked to the Twitter scandals with the LGBTQ+ community.

Harry Potter fan sites like The Leaky Cauldron and MuggleNet have spoken out about the scandals; still holding their love for the saga, but showing hurt and disapproval towards the author‘s personal views.

“Transgender women are women. Transgender men are men. Non-binary people are non-binary. Intersex people exist and should not be forced to live in the binary. We stand with Harry Potter fans in these communities, and while we don’t condone the mistreatment JKR has received, we must reject her beliefs,” states the post published on The Leaky Cauldron’s site.

“Immediately after Rowling‘s tweet was posted, it became clear that Harry Potter fans are doing their absolute best to keep the books sacred. If there is beauty to be found in this dumpster fire of a situation for so many fans, it’s that the fandom was loud in their support for trans Harry Potter fans who are grieving after J.K. Rowling‘s comment,” states the post published on MuggleNet.

It is a hard time for many Harry Potter fans; for many, it is hard to realize that a generational beloved role model figure has, in such a short time, broke several hearts.

However, it is important to keep in mind that many feel it is still okay to love, enjoy and read Harry Potter series. Just because you love the series and the Wizarding world, is does not necessarily mean that you support or agree with the author’s personal positions.

How do you feel about the entire J.K. Rowling Twitter scandal? Let us know in the comments bellow.