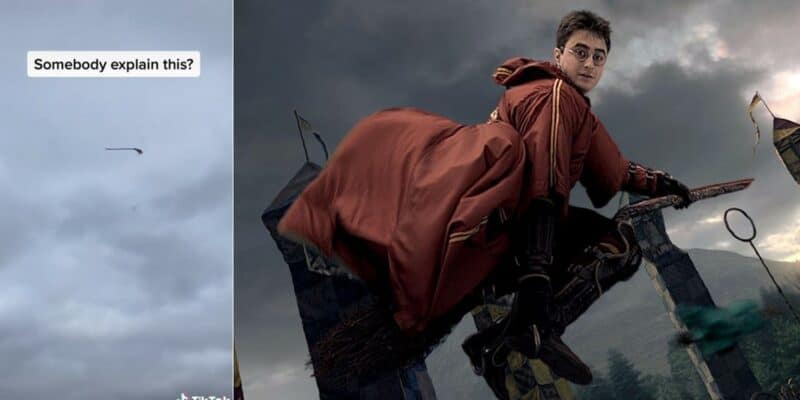 Have you ever experienced something that makes you scratch your head? Like you simply can’t compute what you’re seeing and it just really doesn’t have an explanation? Well, a recent video has gone viral on social media of a floating broom. Is the wizarding world to blame? Let’s go through this video saga together as there are several pieces to this odd puzzle!

In the first TikTok video, @theonenamedlucca takes a video while he’s out making deliveries and spots what appears to be a floating broom. He notes, “Somebody explain this?” Check out the viral video below which currently has over 9.4 million views:

The comments on the viral TikTok video are fantastic, as viewers believe the wizarding world must have something to do with this weird incident. @Lollylels comments with, “Harry sitting there under his invisibility cloak…” Another comment by @BrandonRobert notes, “I swear IF Hogwarts is actually real and I didn’t get my letter imma be ANGRY.” @RyanSmith comments with “That’s just a Nimbus 2000.” One of our favorite comments is made by @SummaLova, “Ronald Weasley!!! How date you take the broom without permission! Your Father is facing an inquiry at work!” And @Blaine_MC says, “‘Harry you left your broom with the mortals and now it’s on tiktok’ – Ron.”

Popular TikTok user, Heather @savagemomlife shares a little laugh over the comments as well in the video below:

RELATED: Daniel Radcliffe May Not Return as Harry Potter Due to J.K. Rowling

But wait, there’s more! There is a “Part 2” to the broom story where TikToker @theonenamedlucca tries to explain what happened a little further:

And, yes… where is the other video? Well, it looks like it was deleted! Here’s a “Part 3” from @theonenamedlucca explaining what happened to his co-worker’s video below:

Oh, and the fun continues. Wouldn’t the people in the neighborhood have seen this floating broom in the air? @theonenamedlucca explains further:

RELATED: “The Grabber” With Disney On Ice Goes Viral

@theonenamedlucca figures out the location where he first spotted the floating broom and returns to show the broom is no longer there:

Green screen? Drone? Wires? UFO? Or is the wizarding world really to blame for this floating broom? While we may still have questions, we do know the comments are too hilariously fantastic to pass up!

How is the floating broom possible? Let us know your thoughts in the comments.

Comments Off on A Floating Broom? Is the Wizarding World to Blame for This Viral Video?