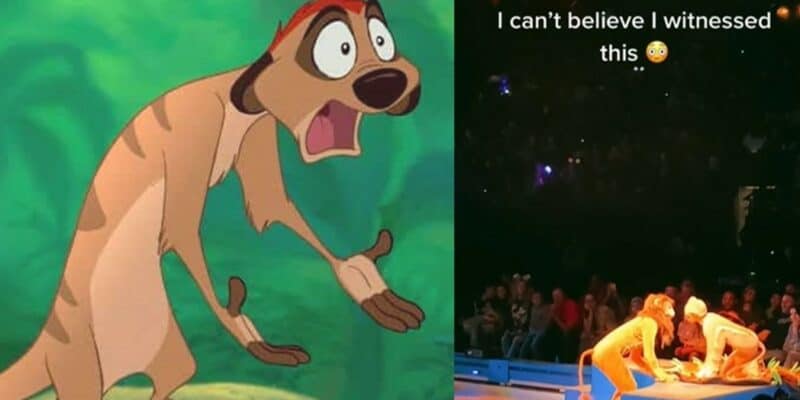 Disney On Ice is back and skating through big cities around the nation after a long hold due to COVID-19. It’s wonderful seeing favorite Disney characters flood the Parks, but if you haven’t seen them on skates, well, you’re missing out! Mickey Mouse, Minnie Mouse, several Disney Princess, and friends dance and perform along to favorite Disney songs as fans clap and sing with the fun. One fan was videoing and caught a glimpse of a grab that looks like it wasn’t supposed to be part of the show, making Disney On Ice go viral on social media in a not-so-good way.

RELATED: Disney On Ice Is BACK – See Show Dates Here!

If you’ve never seen one of the shows, Disney On Ice performers are extremely talented. Take the Disney Park “A Celebration of the Festival of the Lion King” at Disney’s Animal Kingdom for example. Talented performers, right? Well, try doing much of the dancing and moving around while on ice! A big “oops” is almost inevitable and this one was captured on video.

The viral video posted by TikTok user @chelseaalynchh has gone viral with over 2.7 million views. It looks like the video is captured during The Lion King portion of the show with the song “Hakuna Matata”. You’ll spot Timon dancing in the background, but the video keys in on a lion performer who skates over to another performer. We believe he is attempting to grab the tail of the lion friend… but oops… is now given the name #thegrabber.

As shared by @chelseaalynchh “Disney on ice has some explaining to do…. #disneyonice2021 #waitforit #thegrabber #thelionking #fyp”. Check out the video below:

Yikes! Well, mistakes happen right?! The comments to the video are rather entertaining as some viewers believe the grab was intentional while others believe it was a missed pinch.

Intentional or by mistake? What are your thoughts?

Comments Off on “The Grabber” With Disney On Ice Goes Viral