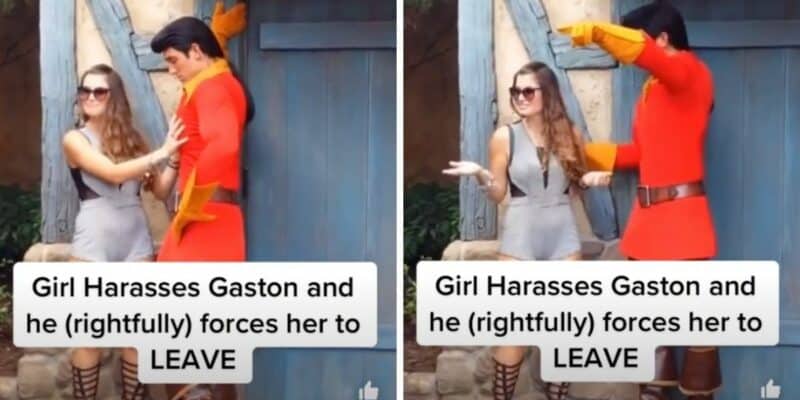 Meeting Disney characters is one of the most memorable aspects of visiting a Disney Park. However, it is very important to keep in mind that, despite these actors and actresses being in character, they are still human and deserve the utmost respect.

One video is now going viral, which shows a Disney Guest harassing Gaston. The video was originally posted to YouTube in 2015, which you can view here, but now, six years later, many Disney fans are resharing the video to social media platforms as a reminder to always respect Disney Cast Members and Disney characters after witnessing this one Guest grab Gaston’s chest in the video.

The video starts by showing the Disney Guest walk up to the Gaston meet and greet in Fantasyland, which was available prior to the ongoing pandemic, and immediately grabbed his chest. Within a split second, Gaston is then seen and heard telling the Guest that her time is done, and she needs to leave. It is clear that Gaston did not feel comfortable in this situation, and so he took action.

Gaston was very stern in telling her she had to leave, which is a great reminder to all Guests that Cast Members have the right to refuse service or photos with Guests if they do not feel comfortable.

You can watch the original video here:

And TikTok user @evansnead reshared the video to his social media account along with some insight as to why Disney fans are resharing this video six years later:

Unfortunately, this is not the first harassment incident to occur between a Guest and Cast Member. In 2019, a Disney World Guest was accused of groping Ariel, and he was arrested on a battery charge.

As the TikToker who posted this video said, please do not be that person. At the end of the day, this is still the Cast Member’s place of work, and it is a family-friendly place of work. If you plan to meet a Disney character at one of the theme parks, please be respectful. Guests who act inappropriately or objectify characters may be asked to leave for the Cast Member’s safety.

Please familiarize yourself with the Park rules prior to visiting. For Walt Disney World’s safety and property rules, visit their website here.