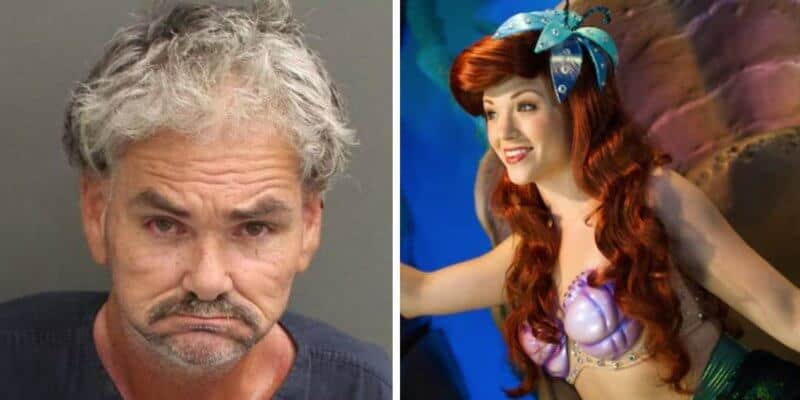 A Walt Disney World Cast Member is accusing a Disney guest, who is a registered sex offender, of groping her while she was on shift and in costume at Magic Kingdom.

According to the Orange County Sheriff’s Office, the victim was in character posing for photos and interacting with guests at Ariel’s Grotto, an area of Fantasyland at Magic Kingdom, on Saturday afternoon when Brian Sherman, 51, and his wife approached the Cast Member and sat on either side of her.

During the character interaction, Sherman told the woman repeatedly how much he loved her character and then he wrapped his arm around her shoulder, as records show.

Disney policy prohibits this Cast Member’s character from being photographed with a Walt Disney World guest’s arm around her shoulders, and though the victim felt uncomfortable, she was in an unfortunate position as she was unable to move since she was pinned between Sherman and his wife, according to a written statement.

Deputies state that Sherman had moved his hand to a lower position and reached out and groped the cast member’s breast for several seconds.

Both the Disney PhotoPass Photographer and another Disney cast member had noticed what was going on and how uncomfortable the victim was so they instructed Sherman move his hand and “pose like a prince”, as records show.

Note: The image below is a photo of the character Ariel sitting at her meet and greet location to serve as an example of where this interaction occurred, but this is not an image of the exact Cast Member who claims to be a victim in this case.

Sherman and his wife left after the character interaction ended and cast members immediately closed the grotto area of the theme park as the victim immediately began to shake and cry, according to the report.

Deputies have stated they had used photos from the Walt Disney World PhotoPass Photographer who was working at the time to identify Sherman as the suspect. He was arrested on a battery charge.

According to records, in 1991 Sherman was found guilty of sexual battery by an adult on a victim under 12. Sherman is a registered sex offender who lives in Orlando.

Orange County deputies have made a statement asking anyone that who may have had an inappropriate encounter with Sherman that they please call them at 407-836-4357.