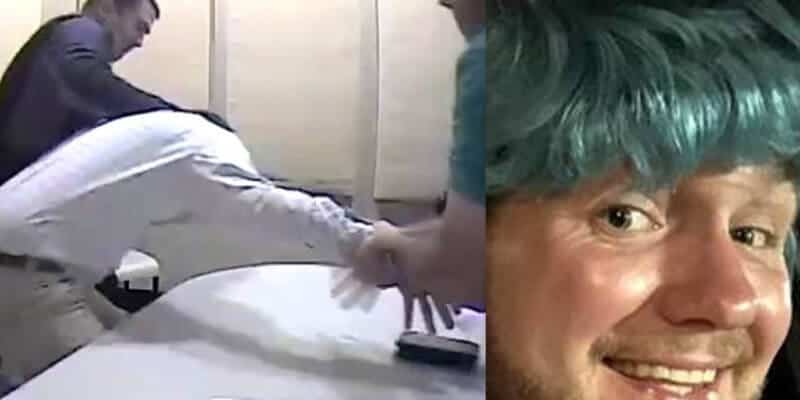 Patrick Spikes, a former Disney employee who was arrested for stealing thousands of dollars worth of Haunted Mansion props and costumes from Walt Disney World got physical with officers in a newly released video.

While interrogating Spikes, officers began questioning the ex-Disney employee about where his smartphone was, which they believed he had used to take pictures of the costumes and props he is accused of stealing. However, as seen in the video, Spikes didn’t want to give up the phone. To get it from Spikes, the officers got in a little bit of a scuffle.

Right before officers wrestle with Spikes, the 24-year-old says he is about to leave, saying: “How about this: I’m about to walk out, and if you guys want to talk, I’ll come back with my attorney. How about that?”

To which, the officer replies: “OK. Keep the car there, and we are keeping your phone,”

Spikes says “No” and grabs the phone to put back in his pocket before getting into a scuffle with the officers. The officers then secured Spikes on the ground and took possession of his cellphone.

As officers hold Spikes down, he asks if he is under arrest. The officers reply that he is only being secured and will not destroy evidence in front of them. Spikes then asks to call his mom to tell her what the officer had told him. To which, the officer replies, “You’re an adult, correct? You’re not calling your mom. Stay there.”

As the video continues, Spikes appears to be hyperventilating as his breathing becomes deeper and quicker. In the video, officers tell him to try to slow his breathing.

Spikes is being accused of stealing $14,000 worth of Disney costumes from two of the Walt Disney World parks. It’s believed by investigators that Blaytin Taunton (Spikes cousin) accompanied him when stealing the costumes and wigs earlier this year from the Haunted Mansion ride at Magic Kingdom.

To get access to the props, Taunton (a Disney employee) would use his ID to get to back stage areas. Here is where he would both steal and take pictures of the props, which deputies say he uploaded to his Twitter account called “BackDoorDisney.”