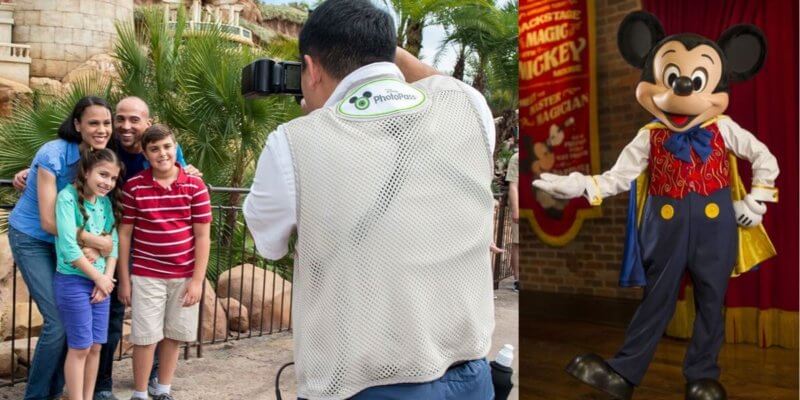 Not only has Magician Mickey returned to Town Square Theater in Magic Kingdom at Walt Disney World, but a live PhotoPass photographer came along with him.

Although we will miss meeting Mickey and Minnie Mouse together in their celebratory birthday outfits at Magic Kingdom, we are thrilled to hear that Magician Mickey is back with a special friend! Disney guests can go back to having their special memories captured by a live PhotoPass photographer rather than the “automated camera box.”

Earlier this month, new automated photo boxes appeared at the Mickey and Minnie meet and greet as well as Tinkerbell’s meet and greet both in Town Square Theater. We also noticed that some showed up at Star Wars Launch Bay at Disney’s Hollywood Studios too and the Anna and Elsa meet and greet in Epcot.

Disney fans were completed outraged and even started a petition on change.org, which quickly circulated the internet. It was reported that the photos taken by these automated boxes weren’t centered, the photos were not zoomed in, and some guests even reported that not a single photo captured the family posing and smiling.

But it looks as if Disney fans finally got Disney’s attention since they have brought back one of the live PhotoPass photographers at one of the busiest meet and greets on property.

It is still unknown at this time if live PhotoPass photographers will be returning to all the locations that have been replaced with the automated boxes, but fans and frequent visitors sure hope so.

The live Disney PhotoPass photographers are what helps bring the magic to Walt Disney World. These aren’t just ordinary Cast Members, and the experience isn’t the same as asking a stranger to take your photo. They are trained photographers with such an artistic eye which helps capture the memories and the laughs so families and friends can look back at the photos and reminisce.

The bottom line is, nothing will ever capture the memories you and your family create like a live Disney PhotoPass photographer.

Are you excited to see the live PhotoPass photographer return to Mickey’s meet and greet in Town Square Theater?