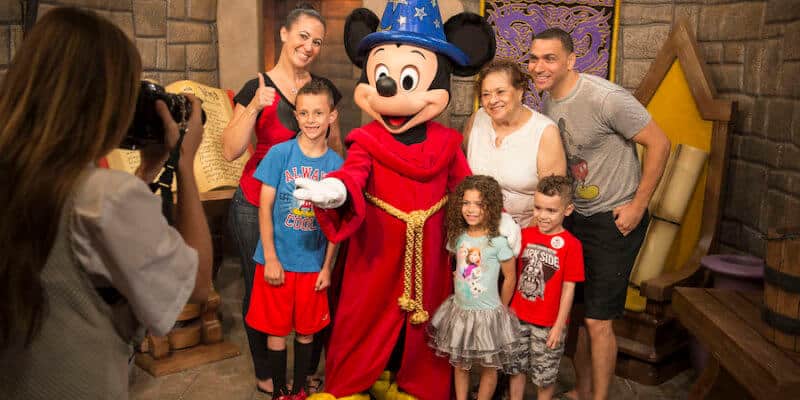 Yesterday we learned that meet and greets would be returning to the Disney Parks, now, things are looking much more official.

At Walt Disney World, Disneyland, Disneyland Cruise Line, and Aulani, A Disney Resort & Spa, many Guests have been waiting to hug Mickey Mouse, Minnie Mouse, and all of their favorite characters for quite some time. During the pandemic, things have been slow to return to normal at both of the American Parks, but now, it seems that hugging Mickey Mouse may just be days away. Disney did give Guests the opportunity to have socially distanced “character sightings” which allowed Guests to take distanced selfies with Disney characters such as Pooh, Chip and Dale, Minnie, Mickey, and more. But now things are changing.

Yesterday, Disney Parks had taken to Instagram to share a video of the rope that separated Guests from meeting Mickey Mouse at Magic Kingdom being removed, with Mickey doing a large hugging motion. In the comments, Disney did note that more information would be available today on Disney Parks Blog. In the post, we saw Disney World and Disneyland are included in the hashtags as well as Disney Cruise Line and Aulani, so it was clear we were likely getting some information on all four locations. Check out the video here!

Disney says greetings will return “in phases throughout the spring and early summer.” This includes dining experiences.

Disney says greetings will return "in phases throughout the spring and early summer." This includes dining experiences. pic.twitter.com/1oZYXwXlYb

It will be interesting to see how these phases are rolled out.

It has been nearly two years since Guests were able to conduct a proper meet and greet, and after so long it is great to see that another aspect of a “normalized” Disney experience is returning.

At Walt Disney World and Disneyland, Guests also no longer need to wear masks, which means that the photo experience will be completely normal. PhotoPass photographers will also be present at all meet and greet locations ready to snap your photo!

Although we are seeing some Disney Resorts return to normal, the pandemic is still heavily affecting the Disney Parks. We have seen Hong Kong Disneyland Resort and Shanghai Disneyland Resort both shut down again due to health concerns, which is a major loss for The Walt Disney Company. Luckily, Disney CEO Bob Chapek has assured the public that Disney is doing well financially as they have just had a record-breaking quarter when it comes to their Parks division.

Meet and greets also accompany the return of Festival of Fantasy and Mickey’s Magical Friendship Faire at Magic Kingdom in Disney World. With all of the night time shows also operating like Disney Enchantment and Harmonious, Guests are now just waiting on Fantasmic! to return. At Disneyland, Guests will soon be able to enjoy World of Color, Disneyland Forever, and the Main Street Electrical Parade at the end of this month!

What character do you plan on hugging first? Is it too soon to bring back meet and greets? Let us know in the comments below!