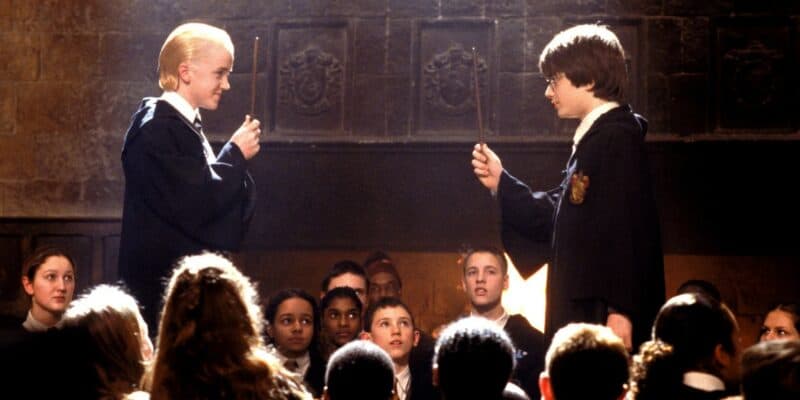 Hang on to your Sorting Hat Harry Potter fans as it’s about to get real! The Harry Potter book and film series have made all of us Muggles look for our inner wizardkind. The books first started to debut in 1997 with the films revving up soon after in 2001. Once a Potter fan, always a Potter fan as now over 20 years later, we’re still as into all things Harry Potter. So, when we see a Harry Potter star dressed as something OTHER than what their character portrays, we can’t help but take a double look! This Harry Potter actor wore a different house color than what we’re all used to…and even added in Harry Potter touches! Of course, fans reacted…

RELATED: Daniel Radcliffe May Not Return as Harry Potter Due to J.K. Rowling

The one causing all the trouble is Draco Malfoy. Draco is the fictional character in J. K. Rowling’s Harry Potter film series. Known in the wizarding world as the student that everyone loves to hate, Draco is a perfect fit for the Slytherin House… or so it seemed. Recently we learned that the Harry Potter star and British actor Tom Felton (AKA Draco Malfoy) is in fact NOT a Slytherin. Tom took to Twitter to share the news seemingly disappointed to say, “I’m a Gryffindor” when taking the Hogwarts House sorting challenge as shown in the tweet:

What REALLY got Harry Potter fans going, however, was Tom (AKA Draco) dressing up as Harry Potter! That’s right, the robe, the Gryffindor tie… and he even added the extra touch with Harry’s scar and glasses. Check out Tom’s Instagram photo:

The photo above received 1.5 million likes and has over 16,000 comments…with the comments being the best part! Check out a few of our favorites:

your father will hear about this, malfoy

Yeah no i will not tolerate this betrayal.

Is Daniel dressed as Draco somewhere?

What do you think of Tom’s (AKA Draco’s) Harry Potter costume? Hilarious or too far?