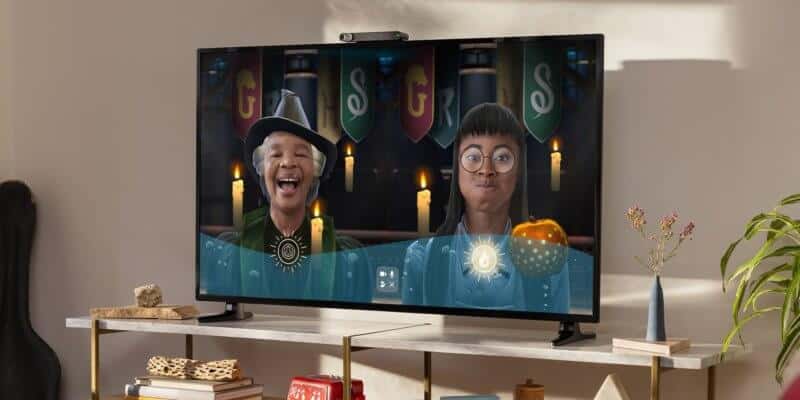 Calling all fans of Harry Potter and the Cursed Child! Portal from Facebook now lets you become a part of the wizarding world without having to leave the comfort of your home. The new augmented reality experience will allow Portal users to become their own characters, cast spells, and more!

Harry Potter and the Cursed Child was published in 2016 and first premiered on Broadway in 2018. The show was an immediate hit and tickets for every show are in high demand and always sell out quickly. The Cursed Child follows the son of Harry Potter and Ginny Weasley and his unlikely friendship with Scorpius Malfoy — the son of Harry’s arch-nemesis during his time at Hogwarts, Draco Malfoy.

More information about the Harry Potter AR (augmented reality) experience and what users can expect from Portal was sent in a press release:

Portal from Facebook is bringing the magic of the award-winning play, Harry Potter and the Cursed Child, to its family of devices. The immersive AR experience lets you and up to 3 friends transform into characters from the play, bringing the witchcraft and wonders of the stage show to life exclusively during Portal-to-Portal video calls.

During a Portal-to-Portal Messenger call, participants can transport into the wizarding world by initiating the new Spark AR multiplayer experience to cast spells while hanging out with their favorite Muggles. There are also 3 custom AR backgrounds from memorable scenes of the play that you can use during video calls and with Photobooth, including the Hogwarts Great Hall, The Ministry of Magic and The Edge of the Forbidden Forest.

Hold onto your broomsticks because there’s more! In addition to the AR backgrounds, there are 12 exclusive AR masks of the play’s most popular characters available on Portal, as well as Instagram and Facebook via each app’s camera. You can then share video and photos via Stories. Also, we’re adding new multiple choice stories to the Story Time library, which let the reader and audience make choices together and explore how those choices impact the story. For full details, please wave your wand over the link here.

For those who are not familiar with augmented reality, it means that computer-generated input interacts with the real world of the person using AR — usually interacting with the person’s movement. In the case of Harry Potter and the Cursed Trial AR, users will be able to cast spells, interact with stories, and more!

Ever since fans were introduced to Harry Potter in the 1997 book Harry Potter and the Sorcerer’s Stone — or Philosopher’s Stone depending on where you live — they have been obsessed with being a part of Harry’s magical world. That excitement has not died down and a new Harry Potter New York store recently opened and launched a virtual reality experience.

The new Portal from Facebook AR experience was created by the same virtual reality company that created the Harry Potter New York virtual reality experiences Chaos at Hogwart and Wizards Unite, WevR. WevR is also responsible for working with Jon Favreau — the producer of Avengers: Endgame (2019), the hit Disney+ series The Mandalorian (2019), and more — to create Gnomes & Goblins. Gnomes & Goblins is a new VR experience that will bring users straight into a goblin society and help them defeat a mysterious foe.

The Harry Potter Portal experience will be available to all portal users. Portal from Facebook also allows users to make calls via Zoom and WhatsApp, use the Amazon Alexa that is built-in, and share photos.

Are you excited to be able to be a part of the wizarding world with Portal? Let us know in the comments!