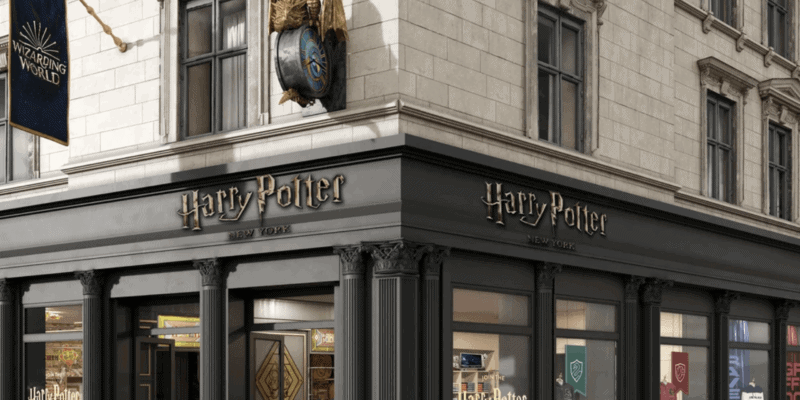 The world’s largest Harry Potter store located in the heart of New York City has announced that it will be opening its doors on June 3. This enormous location will be the Harry Potter flagship store. The store will be offering fans of both the Harry Potter and Fantastic Beasts franchises more merchandise than they could conjure up with even the best of spells!

Here are all the details about this exciting new Harry Potter-centric store!

The opening was announced on the store’s site:

The flagship store will house a variety of shopping areas, offering shoppers anything Wizarding that they could ever want or need. Shopping sections will include Bags, Cosmetics, Sweets, Homewares, and even a Wand Shop!

The official Twitter account for Harry Potter NY also announced the opening and took Guests on a small tour of what they could expect when they enter the new Wizarding World location.

In an official press release, it was also shared that Guests would further be immersed in the world of Harry Potter with virtual reality and interactive experiences that will happen in store.

Also available for fans will be two exciting and immersive multiplayer virtual reality experiences. The full sensory VR adventures are location based, allowing real-time interactive exploration of the Wizarding World as never before. “Chaos at Hogwarts” lets hopeful witches and wizards step into a magical journey to Hogwarts Castle and become part of the adventure where magical creatures and secrets await. Fans will need their wands at the ready as “Wizards Take Flight” prepares guests to fly on brooms with the thrills of a magical wand battle against Death Eaters over the skies of London and around the enchanting grounds of Hogwarts Castle. The “Chaos At Hogwarts” and “Wizards Take Flight” virtual reality experiences are scheduled to open in-store this summer with more details to be revealed soon.

It was also noted in the press release that when the store opens, it will operate on a virtual queue system to keep store capacity at a certain limit and enable social distancing.

For Harry Potter enthusiasts who can’t get to the Wizarding World store or don’t live in the New York area, fear not! You can buy all sorts of magical merchandise from both Harry Potter and Fantastic Beasts on the Harry Potter store’s website!

Will you be visiting the new Harry Potter store when it opens in New York? Let us know in the comments!