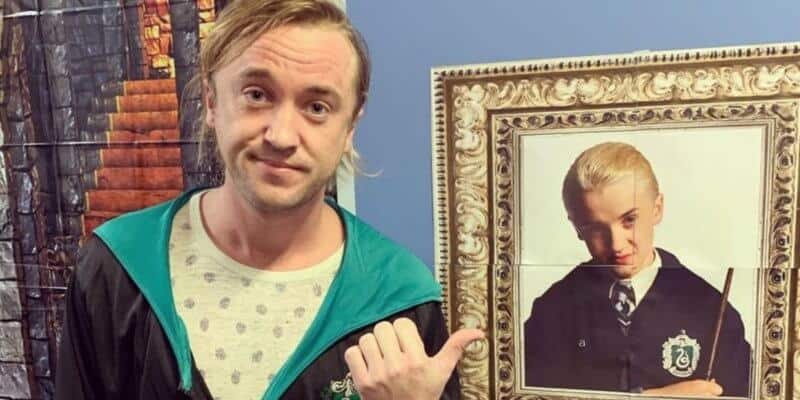 It may be hard to believe, but it has been 20 years since the world first saw the story of The Boy Who Lived on the big screen. The 2001 film Harry Potter and the Sorcerer’s Stone shot stars Daniel Radcliffe, Rupert Grint, and Emma Watson to the top of the celebrity chain. However, there was a fourth young actor who was, and still is, just as recognizable.

The sworn enemy of Harry Potter, the bleach blonde Draco Malfoy, was an enemy for the ages — along with the entire Malfoy family. While Draco — played by Tom Felton — may have changed at the end of the book and film series, his battles with Harry, Ron, and Hermione remain an epic part of the film franchise.

When it comes to reprising his Harry Potter role as Draco Malfoy, Tom Felton spoke to People Magazine and said that he would welcome any opportunity to do so.

“If you’re asking me will I dye my hair blonde again to be Draco, abso-bloody-lutely. Either [him or Lucius]. I’ll play Draco’s kid if you really want!” exclaims Felton. “Any chance to be a Malfoy again would be greatly accepted.”

Felton also revealed that, to this day, he still keeps in touch with many of his Harry Potter costars — including, Radcliffe, Grint, Watson, Jason Isaacs, who played his on-screen father, Lucius Malfoy, Matthew Lewis (Neville Longbottom), as well as James and Oliver Phelps (the Weasley twins).

“It’s sort of a very unjointed family, really, where we all kind of feel like we’re part of something that we don’t actually get a chance to speak to about much,” he says. “But when we do, within a minute, Rupert’s already talking about his latest car that he wants to get or whatever it may be. It’s always fun to catch up.”

Rumors of a Harry Potter series being in the works for HBO Max have been swirling around, but there has been no confirmation if the series will happen or if any of the film’s original stars will be in it.

Would you love to see Tom Felton reprise his role as Draco Malfoy? Let us know in the comments!