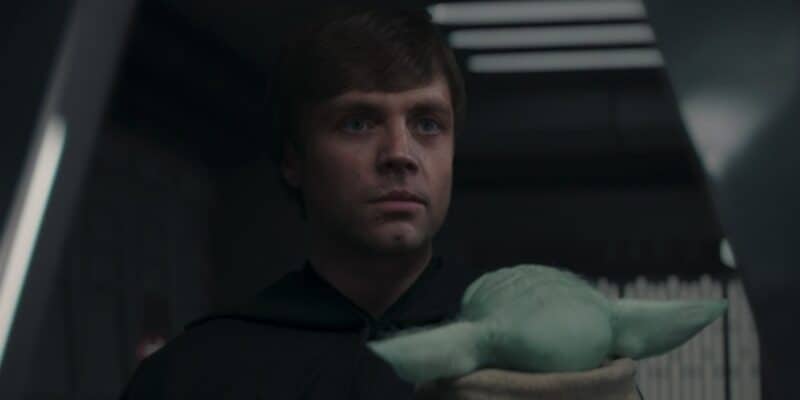 Now, however, some members of the Star Wars fan community are convinced we’ve seen the last of Luke Skywalker, who has been one of the central characters in the Star Wars saga since 25-year-old Mark Hamill first played the Jedi Knight in Star Wars: Episode IV – A New Hope (1977).

Do you think we’ll see Luke again in any of the Disney+ shows?

I think I’d like to see more of him just because I felt like Grogu’s connection to the Jedi wasn’t really explored as much as I think it could have been. just one more episode with Grogu and Luke would’ve been cool. I also like that his appearances can act as a bridge between ROTJ [Episode VI – Return of the Jedi (1983)] and TLJ [Episode VIII – The Last Jedi (2017)] , and I like seeing a post Episode VI Luke that is still optimistic about the Jedi and his role as a master/teacher

But it doesn’t appear as though he’ll show up in season 3 of the Mandalorian judging by the trailer. also the fact that Disney is bound and determined to deepfake his face and voice which severely limits what he can do as a character

Commenters had varying opinions regarding the situation, with some convinced that there’s no way the Star Wars franchise moves forward without Luke:

The story arc somewhat demands Luke be involved somehow. I think they rationalize that they could do something cool with Luke, and end the arc with him setting up his Jedi order (and introduce Kylo as an optimistic student right as the curtains close).

That said, the future of Star Wars is going to have to built on the back of Grogu.

To answer the question in your title, yes, Luke certainly will be in future Disney + shows.

You seem to really be asking if he’s going to be in Mandalorian/Ahsoka era shows. The answer to that is also yes. He will probably make an appearance in Ahsoka and if they are really doing an Heir to the Empire-ish story there’s no way they leave Luke out of it.

Others, though — echoing Lucasfilm’s official stance —  are unsure about whether or not any existing characters should be the cornerstone of the Star Wars galaxy moving forward:

…as much as I’ve grown to enjoy the sequels (probably only because it feels like gaps are being filled slowly) they did exhaust me as a star wars fan, you hear and see all these story board concepts and ideas that had floated around, the scripts from other directors being leaked that quite frankly would have been far superior to what we actually did get, moving completely away from the realm of characters already established and creating something original in the sense of has nothing to do with the known galaxy and story would be a good breath of country fresh air.

I’m personally fine with what we got and kinda want to move away from the Skywalkers and original trilogy and I think disney does too. While I do think he might show up once or twice more, it will only be to help fill in some gaps or possibly provide some information to other characters to help them along in their quests/missions.

At this time, the returns of many Mandalorian characters, save for Gina Carano’s axed Cara Dune, have been confirmed for Season 3 — Pascal’s Djarin, Sackhoff’s Kryze, Weathers’s Karga, and Esposito’s Gideon are all set for comebacks, for example — but Skywalker’s possible role has not yet been announced.

The character is, however, continuing to play a key role in the larger Star Wars story, including in the newly released “Shadow of the Sith” novel that revolves around Skywalker and Lando Calrissian.

What do you think about Luke Skywalker’s return to the Star Wars universe in the future?