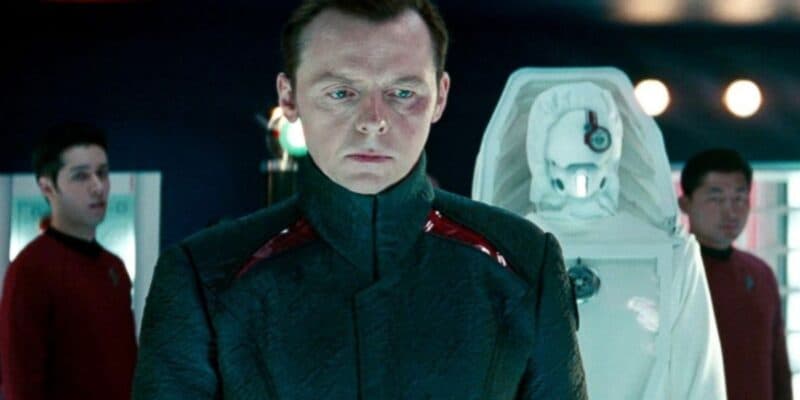 Simon Pegg is no stranger to space, as he has appeared in both Star Trek and Star Wars, two of the most iconic franchises of all time. He has also starred in the British comedy series Spaced (1999), although that didn’t actually take place among the stars.

The 52-year-old British actor, who got his big break with “rom-zom-com” flick Shaun of the Dead (2004), was first launched into the cosmos with JJ Abrams’ Star Trek (2009), in which he plays Montgomery “Scotty” Scott, a Starfleet officer and chief engineer aboard the USS Enterprise.

It’s fair to say that Abrams’ Star Trek served as a “literal” reboot, as it takes place in an alternate reality, meaning it was free to start a new continuity while maintaining the canonicity of the many previous movies, television shows, and stories long established within the Star Trek universe.

The film grossed over $385.7 million worldwide and received positive reviews. Both Pegg and Abrams returned for Star Trek Into Darkness (2013), a loose remake of the beloved Star Trek II: The Wrath of Khan (1982), with Marvel actor Benedict Cumberbatch playing the titular villain.

With Into Darkness grossing over $467 million worldwide, a third film was green-lit, however, JJ Abrams did not return to the director’s chair for a third time round. Instead, Justin Lin took control of the USS Enterprise, as Abrams moved on to helm Star Wars: Episode IV – The Force Awakens (2015).

The first episode in the long-awaited Star Wars sequel trilogy was the first film from the faraway galaxy since Star Wars: Episode III – Revenge of the Sith (2005). While in no way a reboot, The Force Awakens does, however, act a “soft reboot”, not unlike Abrams’ Star Trek.

But while Pegg enjoys a blink-and-you’ll-miss-it role in The Force Awakens, in a recent interview with Sirius XM’s Jim Norton & Sam Roberts, the actor explained how he was, at the time, “jealous” that Abrams had jumped ship (from the USS Enterprise to the Millennium Falcon, if you will), saying:

“Well it was JJ Abrams that was doing it… When I found out that JJ Abrams was doing Star Wars, I got an email about it. I was feeling kind of jealous, like ‘Oh, dad’s leaving us for the other kids.’ Because he directed Star Trek. He’s gonna f*** off to Star Wars now… that’s nice [sarcasm]. But then we had dinner and he said, ‘Oh, do you want to come and play a blob fish?’ I was like, ‘Sure.'”

The “blob fish” in question is of course Jakku’s alien junk-boss Unkar Plutt, though Pegg is in no way recognizable in the role. Nevertheless, this was a dream come true for the Mission: Impossible star, who is admittedly a lifelong fan of Star Wars.

“To be honest, and as someone who kicked off about the prequels when they came out, the Star Wars fanbase really seems to be the most kind of toxic at the moment. I mean, I’m out of it now… I’ve apologized for the things I’ve said about Jar Jar Binks, because of course there was a f***ing actor involved there, and he was getting a lot of flak, and it wasn’t a camp rabbit, it was a human being. And because it got a lot of hate, he suffered, and I feel terrible about being part of that.”

Star Trek Beyond wasn’t followed up by any additional Star Trek movies, although that didn’t stop the many new television shows we’ve had since. The same goes for Star Wars, which has enjoyed three live-action shows since the sequel trilogy ended in 2019.

As for Abrams’ Star Wars efforts, while The Force Awakens was well-received by critics, The Rise of Skywalker, which he also directed, quickly became the most hated Star Wars movie, and followed The Last Jedi in cutting the fanbase down the middle like a lightsaber through butter.

As such, it’s unlikely Abrams will ever return to Star Wars, though he is reportedly tied to a number of theatrical Star Trek projects (although it’s possible many Star Wars fans wouldn’t mind seeing the faraway galaxy “reset” in the same way 2009’s Star Trek‘s continuity was).

Star Trek wasn’t the first time Pegg and Abrams joined forces — that happened with Mission: Impossible III (2006). Since that film, Pegg has played Benjamin “Benji” Dunn in every sequel, and he’ll be returning in Mission: Impossible — Dead Reckoning Part One (2023) next year.

Whether or not Pegg will ever return to Star Trek or Star Wars, though, remains to be seen, but both franchises continue to “live long and prosper”, as there are a number of new movies and television shows in the works on both sides.

Related: 5 ‘Star Wars’ Characters Who Don’t Deserve All the Hate

Star Trek icon Nichelle Nichols, who played the original Nyota Uhura in a number of Star Trek films and television shows, has sadly passed away at age 89.

Would you like to see Simon Pegg return to Star Trek and Star Wars? Let us know in the comments down below!