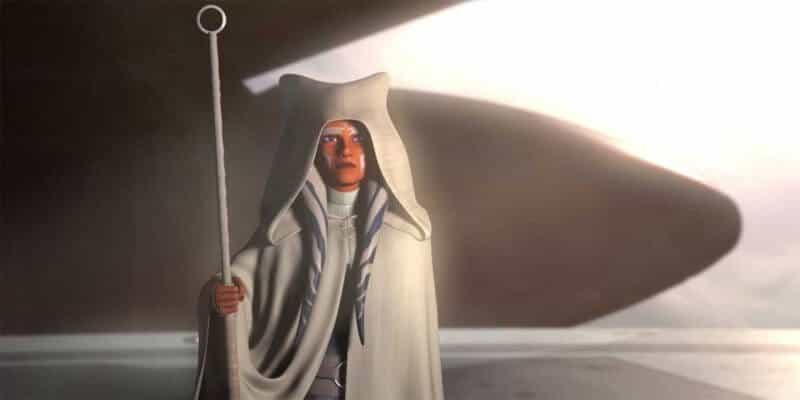 In the lead up to the highly anticipated Ahsoka (TBA), many fans have been wondering whether or not the live-action Star Wars TV show will reintroduce a concept that was previously used in the animated show Star Wars: Rebels (2014).

In the Season 4 episode “A World Between Worlds”, it is revealed that there is a mystical dimension within the faraway galaxy where time and space do not exist. Here, young Jedi Ezra Bridger (Taylor Gray) realizes that the past can be altered.

This is proven when he is able to “pull” Ahsoka Tano (Ashley Eckstein) from her duel with Darth Vader (James Earl Jones), which takes place in Season 2’s “Twilight of the Apprentice Part 2”. Having been forced to abandon Ahsoka, the rebels go on to assume she perished in the fight.

But evidently, this was never the case — Ahsoka was pulled into the World Between Worlds by Ezra, thus allowing her to survive her battle with Vader. But what happens to Ahsoka after her time in this mysterious place has remained a mystery ever since.

We know that she returns to the Sith Temple on Malachor, where she had been engaged in an epic lightsaber duel with her old Jedi Master just moments before. And we know that she resurfaces again some years later, as seen in the Rebels finale “Family Reunion – and Farewell Part 2”.

In the epilogue, Ahsoka approaches Sabine Wren (Tyra Sircar), as the two plan to begin their search for Ezra, who has disappeared into hyperspace, taking Grand Admiral Thrawn (Lars Mikkelsen) with him in the process, in a successful sacrifice to save his home planet Lothal.

It’s unclear as to when exactly along the Star Wars timeline this scene takes place, but many believe it’s some time after Star Wars: Episode VI — Return of the Jedi (1983), as the preceding montage confirms that the Rebel Alliance has successfully defeated the Galactic Empire.

Either way, Ahsoka resurfaces in Star Wars canon, but this time in live action, with Rosario Dawson stepping into the role in The Mandalorian Season 2 episode “The Jedi”. And we know that the live-action show takes place five years after the original Star Wars Trilogy.

It has also been confirmed that Ahsoka will orbit the same period of time as The Mandalorian, just like The Book of Boba Fett (2021). However, what remains a mystery is Ahsoka’s whereabouts following her time in the World Between Worlds.

You’ve probably heard many fans discussing the possibility already, so it will likely come as no surprise that we suspect the new show may reintroduce this concept. However, there are actually a number of clues which suggest that Ahsoka may already be a time-travelling Jedi.

Ahsoka Has a Cameo in The Rise of Skywalker

In Star Wars: Episode IX — The Rise of Skywalker (2019), when Rey (Daisy Ridley) is battling Emperor Palpatine (Ian McDiarmid) on Exegol, she ends up close to death. But upon reaching deep into the Force, she hears the voices of several dead Jedi speak to her.

Among them is Ahsoka, with Ashley Eckstein reprising her role. But it really should have been Rosario Dawson, as she plays the older version as seen in The Mandalorian. Bad planning on Disney and Lucasfilm’s part, or is Rey hearing Ahsoka from a different point in time..?

While that voice cameo is likely nothing more than an Easter egg designed to form some connective tissue between the widely-hated sequel trilogy and beloved animated show Star Wars: The Clone Wars, it remains entirely possible that time travel could be playing a role.

In 2016, Ahsoka Tano creator Dave Filoni offered some insight on Ahsoka’s whereabouts after the World Between Worlds. In a set of 10 “Topps’ Star Wars: Card Trader” digital trading cards created by Filoni, Ahsoka is shown to have remained in the Sith Temple on Malachor. But why..?

He Has Also Likened Her to Gandalf

Ahsoka’s time journeying through the underworld, as portrayed in those digital trading cards, may very well explain why she looks so different in the Rebels finale’s epilogue. When she approaches Sabine Wren, she’s dressed in a hooded white robe with a large white staff to match.

In December 2019, Filoni shared a drawing via Twitter, in which he actually compared Ahsoka’s “death” in The Rise of Skywalker to that of Gandalf in The Lord of the Rings: The Fellowship of the Ring (2001), after which he becomes a higher and far more powerful being.

In an interview with Vanity Fair in 2020, when discussing the upcoming live-action show Ahsoka (TBA), Filoni drew further comparisons between Ahsoka and Gandalf, saying:

With Filoni heavily involved in Ahsoka, it’s a huge possibility that he will want to bring the World Between Worlds into live action. After all, it sounds like there’s a lot more to Ahsoka than we first thought, and who knows what she’s been able to master during her more elusive years.

The Clone Wars, Rebels, and The Mandalorian are currently streaming on Disney+, and Obi-Wan Kenobi (2022) will premiere on May 27. It remains to be seen whether or not Ahsoka Tano will show up in the limited six-part series.

Related: A Recap of ‘The Clone Wars’ and the Prequel Trilogy Before You Watch ‘Obi-Wan Kenobi’

Do you think Ahsoka has time travelled even after her experience in the World Between Worlds? Let us know in the comments below!