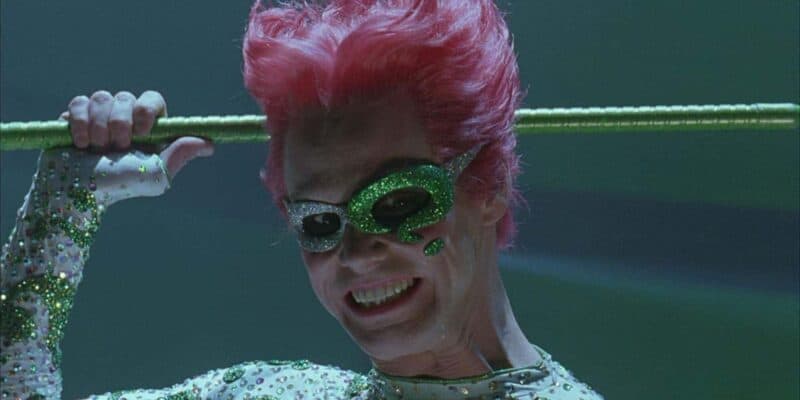 The “multiverse” has been opened across a number of franchises, from the Marvel Cinematic Universe to the DC Extended Universe. While it’s something that has been teased for some time, Spider-Man: No Way Home (2021), which features villains and versions of Peter Parker/Spider-Man from previously non-canon Spider-Man movies, opened the floodgates.

This is further explored in Doctor Strange in the Multiverse of Madness (2022), which features “alternate” versions of the Avengers. Meanwhile, the DC Extended Universe is set to open its own multiverse with Batgirl (2022) and The Flash (2023), both of which will see Michael Keaton reprise his role as Bruce Wayne/Batman, with Ben Affleck also donning the cowl in the latter.

Between the two franchises, we’ve been wondering what a “Batman: No Way Home” might look like. While The Flash will see the return of two Dark Knights, it’s likely the movie will focus on the titular character rather than a line-up of cherry-picked heroes and villains from previous Batman movies, whether Tim Burton, Joel Schumacher, Christopher Nolan, or Zack Snyder-made.

So, in true No Way Home fashion, here’s a selection of characters hand-picked from a number of different Batman timelines, along with their respective actors, who we’d love to see team up in “Batman: No Way Home” (working title only, of course)!

Where would we be without Adam West’s campy and infectious iteration of Bruce Wayne/Batman? West dominated both the small screen and silver screen back in the ’60s, as he protected Gotham alongside Dick Grayson/Robin (Burt Ward) from the likes of The Joker (Cesar Romero), The Penguin (Meredith Burgess), and The Riddler (Frank Gorshin).

While West sadly passed away in 2017, there are many examples of a late actor’s likeness being re-created using special effects, whether digital or prosthetic, and with a stand-in actor. It would of course be easier to recast the actor, or perhaps even have the movie be entirely animated (perhaps even CG), but that would defeat the purpose of trying to re-create the actor’s on-screen charm.

There’s also the option of adapting or reinterpreting footage from the ’60s show or movie. Either way, we simply love Adam West as Bruce Wayne/Batman, and a No Way Home-esque line up just wouldn’t feel right without this not-so-Dark Knight.

5. The Joker — The Arkham Video Games

We get it — Mark Hamill‘s Arkham version of the Clown Prince of Gotham doesn’t exist in any Batman movie, as he’s exclusive to the widely popular Arkham video game series. Mark Hamill has also voiced other versions of The Joker in animated shows and feature length movies. However, there’s something utterly terrifying about the Arkham version of the character.

There’s something quite definitive about him too — perhaps it’s the elongated jaw, the the electrified hair, or that demented game-show host vibe he exudes. But there are other reasons why he might be the best Joker for the job — after all, Heath Ledger, whose version of The Joker in The Dark Knight (2008) is considered the best, tragically passed away in 2008.

While we’ve talked about “recreating” late actors, applying this to Ledger probably wouldn’t go down too well with fans. Having the Batman multiverse include video games might seem too out there, but let’s not forget that Spider-Man: Into the Spider-Verse (2018) featured a Spider-Pig…

There’s no denying that Jim Carrey‘s portrayal of Edward Nygma/The Riddler is one of the few takeaways from Joel Schumacher’s Batman Forever (1995), which stars Val Kilmer as the titular vigilante. While this is Carrey at the height of his game, and therefore as wacky as a Looney Tune, having him appear as a “multiverse villain” is an absolute must.

Jim Carrey’s Riddler evokes memories of Frank Gorshin’s version in the ’60s show, while also bringing a sinister flavor that fits in perfectly with the quasi-gothic/futuristic mish-mash that is Batman Forever. Carrey is also no stranger to donning his true ’90s self, as he plays the larger-than-life, literal moustache-twirling Dr. Robotnik in the recent Sonic the Hedgehog movies.

While there have been darker versions of The Riddler since Batman Forever, whether it’s Gotham (2014 — 2019) or The Batman (2022), Jim Carrey would bring a level of fun and insane to the table that would balance out the more serious characters in our “Batman: No Way Home” line up, whether it’s one of the later versions of Bruce Wayne/Batman himself, or The Joker.

Say what you will about Joel Schumacher’s franchise-killing Batman and Robin (1997), but Arnold Schwarzenegger‘s turn as the big bad is easily one of the more memorable parts of the movie. That doesn’t necessarily come as a huge compliment, but one can’t deny just how awesome the look of this Gotham villain is (the film isn’t short on impressive designs).

Sure, Arnie became the butt of the joke where the movie is concerned, as his one-liners ventured beyond the realm of pun-tastic and were so cheesy they gave even the ’60s show a run for its money. But we think there’s something to be salvaged here, and the fact that it’s Arnold Schwarzenegger — a beloved, world-famous actor — definitely works in Mr. Freeze’s favor.

But more importantly, we’d be lying if we said that Spider-Man: No Way Home didn’t utilize previously disliked characters. Were you ever really a fan of Matt Dillon/Electro (Jamie Foxx)?! From a visual standpoint, Dr. Victor Fries/Mr. Freeze would bring plenty of color to this new Rogues’ Gallery, and his campy nature would easily balance out the darker villains in the line up.

Plucking any character from The Dark Knight Trilogy seems a little tricky, largely because it’s the most realistic series of Batman movies. In short, the “Nolanverse” does not feature other DC superheroes, whether it’s Superman or Wonder Woman. They simply do not exist within The Dark Knight universe. But that doesn’t mean a new movie couldn’t have some fun with it.

Heath Ledger’s Joker is a no-go, while other characters from Liam Neeson‘s Ra’s al Ghul to Tom Hardy‘s Bane just wouldn’t fit in “Batman: No Way Home”, because they’re just far too realistic. However, there is one character who we think would get on pretty well with the others on this list, and she’s neither hero or villain — Selena Kyle/Catwoman, played by Anne Hathaway.

Catwoman is easily one of the more fun characters in The Dark Knight Rises (2012), and her back and forth with both Bruce Wayne/Batman is very entertaining. As such, we think she’s the only character from the entire trilogy (alongside Michael Caine’s Alfred Pennyworth) who would slot in quite nicely with the likes of Jim Carrey’s Riddler and Arnie’s Mr. Freeze!

When it was announced that Ben Affleck would be donning the cape in Zack Snyder‘s Batman v Superman: Dawn of Justice (2016), many fans lost their minds (the same thing actually happened with Michael Keaton prior to the release of Tim Burton‘s Batman in 1989). But despite all the naysay, “Batfleck”, as he’s more affectionately known, turned out to be one of the best.

Ben Affleck delivers an excellent performance as a seasoned and embittered Bruce Wayne/Batman, while also being the most physically imposing version of the Dark Knight we’ve ever seen. Joss Whedon‘s Justice League (2017) didn’t do the Batfleck any real favors, but his role in the 2016 crossover movie alone renders him worthy of being considered the best Batman.

What works particularly well about Ben Affleck’s portrayal is that he feels suited to both a larger-than-life “comic book” universe (Zack Snyder’s Justice League) and a more gritty and realistic one (Batman v Superman: Dawn of Justice). Sadly, we’ll never get to see Ben Affleck’s Batman Trilogy, but we think he’d be well suited in “Batman: No Way Home” as the main hero.

While we’ve been rather indulgent, the DC Multiverse will actually be opening in The Flash, which will see Barry Allen/The Flash (Ezra Miller) team up with Michael Keaton’s Bruce Wayne/Batman, as well as Ben Affleck’s.

It remains to be seen whether or not other Batman actors will also be joining in on the action, but other returning DCEU actors include Michael Shannon as General Zod, as seen in Zack Snyder’s Superman reboot Man of Steel (2013).

However, before that movie hits theaters, Batgirl will be arriving on HBO Max some time this year, which will star Leslie Grace as Barbara Gordon/Batgirl, and will also feature Michael Keaton before he appears in The Flash.

JK Simmons will also be reprising his role as James Gordon in the movie, having last appeared in Zack Snyder’s Justice League (2021). With Simmons currently playing Commissioner Gordon in the DCEU and J Jonah Jameson in the MCU, should we expect a Marvel/DC crossover movie?!

What does your “Batman: No Way Home” line up look like? Let us know in the comments below!