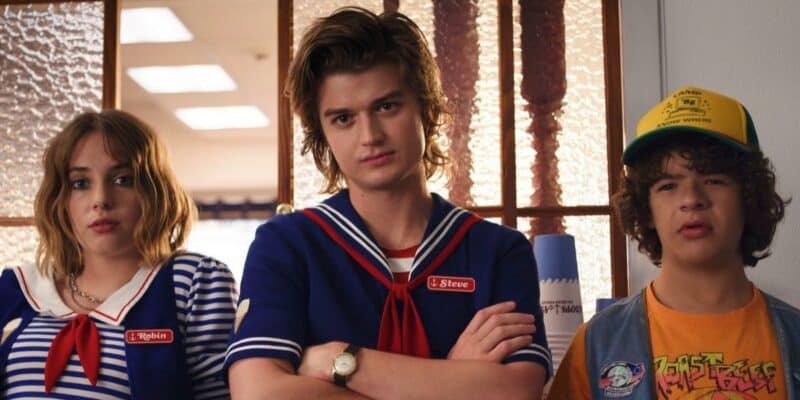 Netflix just dropped a major update on the release of Stranger Things season 4, something so big that it appears the powerhouse series is trying to one-up Star Wars and Obi-Wan Kenobi this May.

After three long years of spanned-out teaser trailers, easter eggs, and delayed updates, Netflix finally announced that Stranger Things season 4 would eventually debut in two “volumes”: Vol. One on May 27 and Vol. Two on July 1, 2022.

But, this Upside Down takeover comes two days after the long-awaited Star Wars story, Obi-Wan Kenobi, series debuts on Disney+:

Every ending has a beginning. Vol. 1 is coming May 27. Vol. 2 is coming July 1. pic.twitter.com/nw8IYqQzil

Both series have been under the spotlight of every Star Wars fan and Stranger Things fan, especially with the respective studios releasing next to nothing for marketing material and more.

At this point, the Star Wars universe is yet to release an official trailer for Obi-Wan Kenobi, while one for Stranger Things season four has been online for almost four months.

Both of these streaming series are the flagship content of Disney+ and Netflix, most notably the preeminent “hype” that Star Wars fans are experiencing with the tease of Anakin Skywalker (Hayden Christensen) and Obi-Wan Kenobi (Ewan McGregor) having a historic rematch.

Netflix has gone full Force on their marketing campaigns for Stranger Things, undoubtedly knowing the release of the season’s Volume One coincides with Kenobi’s historic debut on Disney+.

Lucasfilm remains incredibly quiet, mimicking the no-material marketing campaign that Sony perfected with Spider-Man: No Way Home (2021). The lack of official posters and trailers increased the discussion of this Marvel movie on social media, boosting its record-breaking sales to nearly $2 billion!

Nonetheless, it’s been three years since Netflix and Disney+ teased these upcoming series. It’s no coincidence that both streaming services began promoting their shows in the same month after years of unusual silence.

It seems that we fans are in a middle of a stand-off. Which original series will claim the streaming crown? How will the other studio respond? And when will we finally get a Kenobi trailer? Only time shall tell…

Netflix isn’t holding back anything for Stranger Things 4:

Showrunners Ross Duffer and Matt Duffer will return to helm the series.

The upcoming fourth season of the American science fiction horror drama television series Stranger Things, titled Stranger Things 4, is scheduled to be released worldwide exclusively via Netflix’s streaming service in two volumes, with the first volume scheduled to release on May 27, 2022, and the second volume scheduled to be released five weeks later on July 1, 2022. The fourth season will have nine episodes and has continued to be produced by the show’s creators the Duffer Brothers, along with Shawn Levy, Dan Cohen, and Iain Paterson.

Stranger Things 4’s Volume One releases on May 27, 2022, with Volume Two debuting on July 1, 2022. It’s reported that each volume will consist of four episodes.

Which series are you more excited for? Let us know in the comments below!

Comments Off on After Months of Silence, ‘Stranger Things’ Tries to One-Up ‘Star Wars’