Learn About All the New Restaurants Coming to Disney Parks In 2023! - Inside the Magic 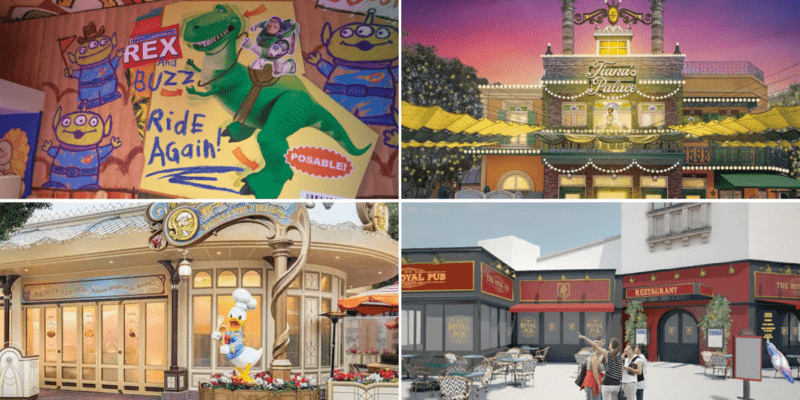 2023 will be the perfect year for Disney foodies around the world, as Disney Parks worldwide are welcoming a long list of new restaurants and dining locations, with many more getting extensive refurbishments for all fans to enjoy! Are you ready to learn more about your favorite Disney Park’s upcoming locations? Let us tell you all about them!

Disney Parks worldwide are constantly changing and upgrading experiences to provide Guests of all ages with the most magical days every time they visit. Whether it be with the latest attractions — like the long-awaited roller coaster TRON Lightcycle/Run, Guardians of the Galaxy: Cosmic Rewind, the upcoming Tiana’s Bayou Adventure coming to Disney World and Disneyland, or the all-new Mickey & Minnie’s Runaway Railway opening at Disneyland this month — the most exciting entertainment offerings — including two brand-new nighttime shows debuting at Disneyland, fan-favorite parades returning to Disney World, the return of a frustrated Disneyland parade, an all-new drone show inspired by Marvel characters, and a live musical 20 years in the making — spectacular events — like the coming celebrations for the 100th anniversary of The Walt Disney Company — and many more magical offerings Disney Parks worldwide are sure to offer a day packed with magic for the young and the young at heart.

These upgrades and changes include new dining experiences for Guests visiting Disney Parks and their respective shopping and entertainment districts — Downtown Disney at Disneyland Resort, Disney Springs at Walt Disney World Resort, Disney Village at Disneyland Paris, and Disneytown at Shanghai Disney Resort. So let us tell you about the latest restaurants coming to these magical locations in 2023.

After years of delays and high anticipation, Guests visiting Walt Disney World Resort will be able to visit the world’s first Toy Story table service restaurant, making its debut at Toy Story Land in Disney’s Hollywood Studios this year. Roundup Rodeo BBQ will be an all-new restaurant inspired by the Toy Story franchise where Guests will be able to enjoy a delicious meal surrounded by Buzz Lightyear, Woody, Rex, Zurg, and Trixie, along with other fan-favorite characters from the popular Pixar movie franchise.

While the long-awaited Disney World restaurant is scheduled to open in Spring 2023, Disney officials are yet to announce an opening date to look forward to. Still, we can’t wait to enjoy a delicious meal in this new location packed with fun for the young and the young at heart.

Rosa Mexicano will bring the spice and flavor of authentic Mexican cuisine to Walt Disney World, adding to the already exciting offerings at EPCOT’s Mexico Pavillion with a new location at the Swan and Dolphin Resort. While this will be the first Rosa Mexicano location to open in Florida, the chain has several locations in New York, Pennsylvania, Maryland, Massachusetts, New Jersey, Virginia, and Connecticut.

“Rosa Mexicano’s arrival to Walt Disney World Swan and Dolphin is a truly exciting moment of our expansion. The opening reflects our founding chef Josefina Howard’s vision of introducing Mexican culinary traditions and authentic Mexican heritage to the world,” said Jim Dunn, CEO of Rosa Mexicano. “Once the restaurant opens, we will offer the Orlando market a fresh take on Mexican food, authentic Mexican heritage, culinary techniques and lively dining.”

Per a press release from the Rosa Mexicano team, the company is scheduled to open its “first Orlando-area location in the Walt Disney World Swan and Dolphin in early 2023.” However, no official date has been announced by the theme park or company officials.

Stop by for a selection of handcrafted hot and iced coffees featuring Joffrey’s Coffee, a variety of teas and fresh pastries.

Highlights from the menu include:

Grab the perfect snack to bring with you on a scenic walk along Disney’s BoardWalk.

Delight in the Ultimate Indulgence

Discover this new bakery with a whimsical atmosphere that complements the idyllic charm of Disney’s BoardWalk. Upon entering, you’ll find counters lined with handmade cakes that are one-of-a-kind in beauty and taste, attractively displayed on French porcelain platters topped with glass domes. Indulge in these and other blissful bites, such as:

This destination bakery is sure to become a favorite among Guests of all ages.

No opening date has been announced for The Cake Bake Shop® Bakery by Gwendolyn Rogers yet.

Summer House on the Lake at Disney Springs

Summer House on the Lake is making its Disney Springs debut in 2023. Summer House has locations in Chicago, IL, and North Bethesda, MD, bringing sunshine all year round, and Disney World in Orlando is the following location to welcome the never-ending summer. Summer House describes this warm and enchanting concept as follows:

The California-inspired menu, led by Chef Ben Goodnick, features simple ingredients sourced from local grower partnerships and sustainable products. Rosé is poured all day off the signature Rosé Cart, alongside an extensive wine and handcrafted cocktail list. And no matter the weather, the bright and airy vibes always fill the atmosphere.

Whether you’re in for date night, a family get-together, or brunch with friends, summer is waiting for you on the other side.

No opening date has been officially announced for Summer House on the Lake at Disney Springs.

With so many exciting offerings and the debut of the Disney Dining Promo Card, a special offer for select Disney World stays that will likely replace the Disney Dining Plan, 2023 will be the perfect year for all Disney foodies to visit the four theme parks that Walt Disney World Resort homes — Magic Kingdom, Disney’s Hollywood Studios, Disney’s Animal Kingdom, and EPCOT — and enjoy all the offerings that the Resort offers across its hotels.

Of all the exciting projects coming to Disneyland Resort this year, the grand opening of Tiana’s Palace in New Orleans Square is perhaps one of the most anticipated by thousands of fans since its initial announcement at last year’s Disney D23 expo in Anaheim, California. The new restaurant inspired by Disney’s Princess and the Frog (2009) will be the perfect addition to New Orleans Square, joining the upcoming attraction Tiana’s Bayou Adventure and the new shop “Eudora’s Chic Boutique Featuring Tiana’s Gourmet Secrets.”

This new restaurant will replace French Market Restaurant (and Mint Julep Bar), which will shut down permanently on February 17, 2023, to receive the magical makeover and open as Tiana’s Palace (alongside Mint Julep Bar with its famous mint juleps and Mickey beignets) later in the year.

Tiana’s Palace will be the newest restaurant on Orleans Street. Within its peach-colored walls and fancy green wrought-iron balconies, you’ll find elegant fixtures and appointments reminiscent of Tiana’s life and friendships. The new Tiana’s Palace will have much of the same pinch of pizzazz and flair as the restaurant from the film, offering authentic New Orleans flavors inspired by Tiana’s friends and adventures in this quick-service style restaurant. While Tiana’s Palace is not a character dining location, guests may find Tiana in New Orleans Square.

The menu at Tiana’s Palace will expand on many of the current favorites served in the location, explore seasonal flavors and, of course, offer some New Orleans classics. Tiana’s Palace is sure to be a gathering place for friends and family to enjoy great food and celebrate together, just like Tiana and her father James dreamed of.

While the fan-favorite Downtown Disney restaurant is not going anywhere, the iconic location is temporarily closed as it goes under a remodel and branding update to reopen as “Jazz Kitchen, Coastal Grill & Patio” and “Beignets Expressed” in the Downtown Disney District.

Per the official Ralph Brennan Restaurant Group, Inc. website, “Jazz Kitchen Coastal Grill & Patio will incorporate a vibrant California energy and fresh approach to the menu, dining spaces, and patios, while staying true to the heart of New Orleans.” “Beignets Expressed will showcase the craft of beignet making with an expanded beignet menu and our signature fast and friendly service.”

As the Downtown Disney District continues to evolve and add amazing new locations and exciting offerings for all Guests to enjoy, Disney has shared the concept art for the latest location of the Din Tai Fung restaurant, opening on the west side of the district in the future. No timeline has been announced for the opening of the Downtown Disney restaurant, which will join over a dozen locations in California, Washington, Oregon, and Nevada.

Disneyland Paris could not fall behind on the updates, as Disney Village is undergoing a massive transformation, with several fan-favorite locations shutting down to make way for new and exciting offerings. Earlier this month, King Ludwig’s Castle closed its doors to welcome The Royal Pub, which will be opening in February 2023. Disneyland Paris News states the following regarding The Royal Pub, Disneyland Paris’ latest dining location:

Whether you’re craving tasty finger and comfort food, with a great selection of craft beers, all-day breakfasts, generous fish & chips, Guinness-braised beef, authentic pies, flatbreads, toasted sandwiches, and salad bowls, or the yummiest desserts in town, you won’t want to miss The Royal Pub and its warm and lively ambiance during your next visit to Disneyland Paris.

Earlier this month, the fan-favorite restaurant Planet Hollywood also shut down permanently after years of operation at the Disney Village in Disneyland Paris. While the iconic Disneyland Paris location of Planet Hollywood is already surrounded by construction walls and being dismantled, Disney officials have not announced future plans for what could replace the iconic restaurant.

Another iconic location that has likely seen its demise is the Rain Forest Cafe at the Disney Village, which is now completely bare after a massive demolition, removing the characteristic animals at the Parisian location of this international chain. Again Disney officials have not announced any plans for the location, which many are commenting will permanently close. As of this article’s publishing, the official Rain Forest Cafe website still lists the Marne-La-Vallee location as part of the company’s international locations, but this information could change.

After powering through multiple closures and an unexpected delay, Shanghai Disneyland has managed to stay on par with its international counterparts in continuing the transformation of the Resort with the opening of an all-new, first-of-its-kind location.

Donald’s Dine ‘n Delights is the newest restaurant to open at Shanghai Disney Resort’s Disneytown and is the first dining location inspired by Disney characters to arrive at the shopping and entertainment district, making the restaurant much more special! Donald’s Dine ‘n Delights offers Guests freshly baked specialty pizza, over-the-top milkshakes and rich sundaes in a variety of flavors, and whimsical desserts hosted by Donald Duck himself, all in a charming, Parisian-style garden setting.

With so many options, guess we’ll all have to plan more than one Disney trip this year to enjoy the newest restaurants debuting at Disneyland, Disney World, Disneyland Paris, and Shanghai Disneyland.

Will you visit your favorite Disney Park this year? Tell us about your plans in the comments below!